Trending
You are at:Home»MOVIE REVIEWS»MOVIE REVIEW: THE NUTCRACKER AND THE FOUR REALMS REVIEW
By Karen Salkin on November 26, 2018 · MOVIE REVIEWS

THE NUTCRACKER AND THE FOUR REALMS REVIEW

If you read my previous article on The Nutcracker and the Four Realms, you may have noticed that I didn’t review the movie, but rather the venue where I saw it. That’s because the presentation at that theatre was lovely, but the actual film, not so much. 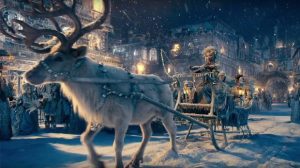 Outside of the absolutely stunning visuals, which really are special, there’s nothing else to recommend it.

First of all, and perhaps most importantly, it’s not the real story of The Nutcracker. It actually has nothing to do with that classic tale at all, other than that the girl and the toymaker have the same names. And there are toy soldiers and mice. Lots of mice. Lots and lots of mice.

So, for Nutcracker purists, like myself, just pretend that you’re seeing a totally different story because you’re not going to be happy otherwise. While the real story of The Nutcracker is about a girl whose toy nutcracker becomes a handsome prince, and leads her through an enchanted moonlit forest, where they encounter magical beings, all dancing fabulously for them, this is how Disney describes their weirdo new take on it: “All Clara wants is a key–a one-of-a-kind key that will unlock a box that holds a priceless gift from her late mother. A golden thread, presented to her at godfather Drosselmeyer’s annual holiday party, leads her to the coveted key–which promptly disappears into a strange and mysterious parallel world. It’s there that Clara encounters a soldier named Phillip, a gang of mice, and the regents who preside over three Realms: Land of Snowflakes, Land of Flowers, and Land of Sweets. Clara and Phillip must brave the ominous Fourth Realm, home to the tyrant Mother Ginger, to retrieve Clara’s key and hopefully return harmony to the unstable world.”

While the actual written story, which goes back to 1816, and the libretto for the 1892 ballet vary a bit, neither one is even close to the very idiotic story this new film is putting out. This one is annoying and tedious. I was shocked to learn later that it’s only an hour and forty minutes; it felt like at least three hours! Worst of all, especially for a holiday and/or Disney film, it’s absolutely soulless. 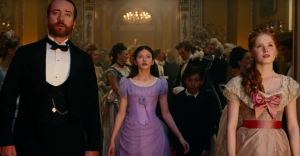 Clara flanked by her father and sister at the Christmas party.

It’s being marketed to families, like children know what a “realm” is!!! Guess what? They do not. So even the title is stupid!

And this ludicrous story has absolutely nothing to do with the actual toy nutcracker!!! At all! In any which what way! In any shape or form. (I think you get the picture.)

And some of it is downright frightening. In the opinion of this former teacher, The Nutcracker and the Four Realms is definitely not for kids, (which is a shame since it’s trying to be one of the big holiday films.) Or musophobes! I had to stop eating my popcorn because the mice were making me queasy. (And that’s saying something!)

And don’t get me started on the music! Throughout the entire debacle, there are just a few short strains of the magnificent original ballet score by Tchaikovsky! It’s basically just in the background every now and then. That superior symphony is mainly replaced by an inane new score. (It may get nominated for awards this season, but it pales in comparison to Tchaikovsky.)

The most egregious offense of all is that—there’s hardly any dancing! Who goes to see any version of The Nutcracker not expecting to see lots of beautiful ballet??? That answer is—no one! 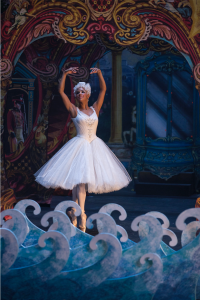 No wonder The Nutcracker and the Four Realms has been a complete bust! Well, financially, anyway, with it just about breaking even worldwide at this point.

To be completely fair, there are a couple of good things about the holiday film. First and foremost is that it’s visually spectacular. For me, they could have just turned-off the sound and allowed me to revel in those pictures. Leave it to Disney to come up with images like these. They’re all truly amazing, (a word I rarely use.)

Then there are the brief moments of Misty Copeland’s exquisite ballet dancing. I highly suggest we all always take any chance to see Misty Copeland dance, even if it’s for just these few minutes.

And I really appreciate that The Nutcracker and the Four Realms opens with a nod to Fantasia, Disney’s third animated feature, by having the conductor begin the proceedings, just like in that early film.

There is one line early on in the script with which I totally identified. Clara’s father tells the children, “Christmas comes whether we like it or not,” because this is the first Christmas without their mother, who had passed away earlier that year. (Another nutty deviation from the original tale, but it’s the incident on which the entire saga is based, so oh well.) That’s exactly what I’ve had to deal with in the past seven years since my mother died…on Christmas, which had always been my favorite holiday. That’s a trauma one does not ever get over, trust me. 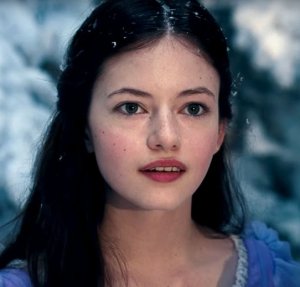 Mackenzie Foy as Clara. Look at the black line over her lip!

Speaking of traumas, this comment is not about the actual film, but visuals in it reminded me of this: It always boggles my mind when I see that, in the olden days, people decorated Christmas trees with…live candles! How did everyone’s homes not go up in flames, thus canceling the holiday for all time? And how did the masses not realize how dangerous that practice was?!

Now, as to the performances in The Nutcracker and the Four Realms, I was not the least bit impressed with the lot of them, even Helen Mirren, who just seemed a bit lost in there. I’m sure that other critics are making a fuss about Mackenzie Foy, the young girl who played Clara, but she did nothing for me. And perhaps they should have de-fuzzed her upper lip a bit. She was rocking an actual black line on it, like a man’s pencil ’stache. It looks like she drank a big mug of hot chocolate before every scene, and forgot to use a napkin! That begs the question—whyyyy??? (Obviously, not the best make-up people on this film.)

Speaking of upper lips, what is up with the nutcracker’s gold above-the-lip-lipstick??? I kept hoping he would wipe his mouth every time they showed the dude!!! 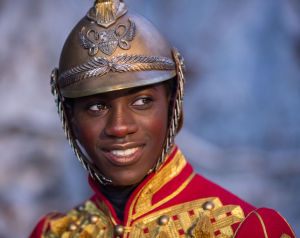 Jayden Fowora-Knight as the Nutcracker, with his crazy lip make-up!

And about him, I’d be remiss if I didn’t point-out that in everyone’s desperation for diversity in all things nowadays, they cast a black actor, Jayden Fowora-Knight, as…the nutcracker, which is just—sorry about this—nutty!!! (And then to make matters worse, his part is so trivial, even though he’s the title character, that he’s not even in the main cast list on Wikipedia!!!)

And Keira Knightley is dreadful as something or other (it’s not really clear what her role is) in one of the realms, (which it’s also not clear what they are!)

And what was American Morgan Freeman doing in there as the toymaker, and one of her mother’s best friends for life, when everyone else is British? Again, diverse casting desperation, I fear.

Okay, now that you know all this, and your expectations are lowered sufficiently, I say that, if you do plan to see The Nutcracker and the Four Realms, you must see it on a big screen. Dot, dash, end of story. So you had better hurry, because I have a feeling it will go quickly to video!