Do not take young children to see this movie!!! Period. Dot, dash, end of story. Most of the 2019 version of The Lion King is way too frightening and traumatizing. If you thought Bambi’s mother getting killed was heartbreaking, wait till you see this one!

Yes, I do know that the same scenarios happened in the 1994 cartoon version, and in the Broadway show that followed, but there’s something about seeing it with computer-generated true-to-life-appearing animals that makes it worse. (Not that I enjoyed the father’s death in any form, mind you.) 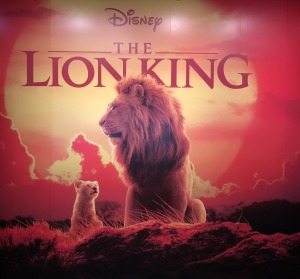 Photo (of the mural) by Karen Salkin, as is the one at the top of this page.

I’ve never been a fan of stories that feature violent deaths, for adults, and most especially for children. No one has to learn about this oh-too-real“circle of life” at too young an age. Let kids be kids!!! Sheesh.

And it’s not just that horrific death that upset me—most of the animals are downright terrifying! Especially the hyenas. I was actually screaming in fear! I grabbed Mr. X’s hands so hard that I injured his thumb!

But to witness the stunning animation, and some of the wonderful performances, (Beyonce’s definitely not included!,) grown-ups should all see it. I’m partial to actual cartoons, but this animation is mind-blowing!

The Lion King plays in some theatres in 3D, but I’m so glad that I did not see it in that format because I think I’d be scared out of my wits to see wild animals running towards me so realistically!  (For my really fun story of that happening to me in real life, click here: www.youtube.com/watch?v=spG8zu732hM&t=9s.) Forget the lions–I think I would have fainted if I saw those hyenas in 3D!

The funny parts are really amusing, but the violent parts are soooo violent! Leave it to Disney—they always put something sad into their films that are geared towards children. What is wrong with them??? The comedic sections are excellent, but at least two-thirds of The Lion King is horrifying animal-against-animal violence. Seeing all that just might give kids (and me) nightmares!

To be fair, (which I always am,) two young girls I know, one eleven, one eight, were fine with all of it. But they’re the offspring of the strongest, most mentally-stable couple I know, (who love all things Disney maybe even more than Walt did!,) so I can’t really judge by their reactions. I just wanted to give you another side to my thoughts. (But this is cute—the eight-year-old said that it might scare a three-year-old! I love that!) 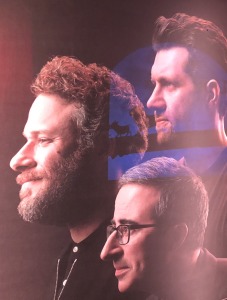 Now, as to the voice performances, it’s actually offensive that Disney has been promoting Beyonce’s appearance in this film more than that of the other truly talented actors, when she actually utters only a few sentences,* (and sucks at even those!) Yet I’ve never heard one peep about the regal James Earl Jones voicing the father!!! Not only is he the only original cast member from the cartoon version, but voices like his, (along with the perfectly evil Chiwetel Ejiofor as Scar, and the comic actors–John Oliver as Zazu, Seth Rogen as Pumbaa, Billy Eichner as Timon,) are what made this movie!!! *(Perhaps the producers made her part smaller after they witnessed her so-much-less-than-stellar performance.)

As a sidebar, I wonder what vegans think of this film which features animals eating other animals. Maybe those zealots want to move to the jungle and make the denizens eat a plant-based diet, too! (But those hypocrites will still keep our carnivore names, like “chicken,” “sausage,” and “turkey!” Don’t even get me started.)

I just realized this–The Lion King in live-action is like a Jordan Peele horror film! Everyone’s upbeat and smiley to start, but we end-up being in for a blood-curdling ride!

So my advice is to see it, but leave the children at home, until they’re at last thirty!!!

This hilarious video, from Honest Trailers, sums up my feelings exactly, in the best way possible:
www.facebook.com/HonestTrailers/videos/2407575619461495/UzpfSTEwMDAyOTIwNDIyMDkyOToyMDk5MjM3NjY2NTc3NjM.