Naomi Watts, as a real-life mother caught in the 2004 Indian Ocean tsunami with her young son, gives the absolutely best performance of the year! Not just in the female categories, either. [Disclaimer: As of yet, I haven’t had time to see Amour, Beasts of the Southern Wild, and Zero Dark Thirty, so I can’t judge those three nominated actress’ performances.]

As a matter of fact, the entire cast of The Impossible is superior! They were all so good that, at times, I thought they were the real people involved in this horror. [Note: the real-life survivors of this disaster are Spanish, while all the characters in the film are British. But it makes no nevermind.] 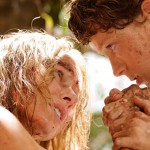 The cast should have been nominated for a SAG award in the Best Cast category, and young Tom Holland (who plays the son) should have gotten a Best Supporting Actor nod…from every award show! I’ve always loved Alan Arkin, but his nod for Argo is so undeserved, especially when it could have gone to this kid. (Tom was one of the original stars of the London production of Billy Elliot, The Musical, by the way, but this was his film debut! That was stunning news to me when I researched him after I saw it.)

I had a lump in my throat through the entire film. I don’t think I breathed for the whole two hours!

I don’t have much else to say about The Impossible, except that if you’re not grateful for your own life after seeing it, you’re not human. It was gut-wrenching.

One interesting note is that I’ve never seen so many credits as there were at the end of this one! They were eleven minutes long! With no fun out-takes because I have a feeling there weren’t any. The whole scene was just so intense, I can’t imagine much mirth on the set.

But, as hard as it to watch, because we know there are so many stories like this one created by that disaster, I highly recommend it. Not only for the incredible performances, but to help you appreciate what you have. I know that it re-affirmed that gratefulness in me.