[Note on the title: I refuse to call this film Lee Daniels’ The Butler because that title just annoys me. It was supposed to be called simply The Butler, but because Warner Brothers owns the rights to an obscure silent short of the same name, from 1916, they wouldn’t allow this movie to use the it. I feel for the producers of this film, even if it is the Weinsteins, because The Butler is the perfect moniker for it. But, if it had to be changed, I feel that something like The White House Butler, or simply White House Butler without the “the,” would be more appropriate than putting the director’s name in front of it. That’s just a vanity that rubs me the wrong way. If any name should have been in front of it, it should be Danny Strong, because he’s the one who wrote it, which is where I feel most of the credit for the success of the film should go to begin with. Well, along with Forest Whitaker, who sold the whole thing with his fabulous performance.

I still don’t get the “same title”ruling to begin with, because there have been several over the years. (There are two different Heaven Can Waits for example, and one isn’t even a remake of the other; they’re two completely different films. I’m sure there are many other examples like that.)

I really do think that no new film should be allowed to use the title of a film that’s already in existence, but since many already do, I really don’t get the ruling on this. Oh well. But I’m going to be calling it The Butler, just you know.]

Now to the review. Finally! 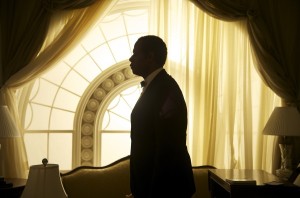 The movie itself was so exhausting that I don’t really have much energy left to write about it. But, even with its flaws that I’ll get to in a minute, I do feel that every American should see it for the historical significance. As I’m sure you all know by now, it’s based on the life of a real man who was a butler in the White House through many administrations. He’s black, and therefore we see the struggle of the black people in this country over many decades. (Okay, reading this last paragraph back, it looks like something I would’ve written in high school or college. And I don’t mean that in a good way about myself; I only wish that I still had my classic review of Catcher in the Rye. It was hilarious, but trust me, that wasn’t my aim. Let’s hope the rest of my review here is written better than this last paragraph.)

I’m sure most of us are aware of much of what went on in the civil rights movement, even if we haven’t experienced it ourselves, but seeing it up there on the big screen really brought it home for me. Some of it was excruciating to witness. And that a young white guy wrote this screenplay is just extraordinary to me. He should earn honorary membership in the NAACP!

So, the writing was excellent, Forest Whitaker gave his usual brilliant performance, and the supporting cast, including Oprah Winfrey, gave it their all. So kudos to the filmmakers on all those levels. Because of all of those factors, and also what I feel is the attempt on the part of all voting entities to assuage their guilt about so few people of color winning awards over the years, I feel that The Butler will win most everything this season. Some awards will be deserved, while others will not.

Several cast members, including Forest and Oprah, spoke at the post-screening Q&A session, and along with the rest of the assemblage, I stood and cheered when Forest came out. But I didn’t go as ga-ga over the production as a whole as most of the others seemed to. It took me awhile to put my finger on exactly why that was. In speaking to some also not-as-enthusiastic members of the audience, we figured out what exactly bothered us.

I realized that one of the problems was with many of the shots; there were too many close-ups, and also too much “filler.” Not every single moment was that important, yet the direction was trying to make it seem that way. As much as I hate to say this about Lee Daniels, whom everyone in show business seems to love at the moment, I was not really a fan of the direction, while some others cited the choppy editing. Some of us also really didn’t know what was happening half the time. We also had trouble making out half of the dialogue; some of it was the fault of the sound mixing, while another part of that particular problem can be attributed to some of the actors speaking either too softly or too indistinctly.

One thing I really didn’t like at was all the cameos. They were totally not necessary, and actually took my attention away from the action. I didn’t see Eisenhower; I saw a Robin Williams. I didn’t see Nixon; I saw John Cusack. I didn’t see Nancy Reagan; I saw Jane Fonda, (though that portrayal was actually the closest to the real thing.) And on and on. It was just distracting. I feel that it would’ve been much more effective with actors we’re not familiar with, and Lee Daniels could have been a hero to all of the unemployed actors who actually need the few lines. And who also might have been better in the roles. I mean, couldn’t you just see me as Jackie Kennedy?! (That last line was just to see if you’re paying attention to what you’re reading.)

One prime example of what I’m talking about is Mariah Carey. What was she doing in there??? We saw her for about three seconds in one scene and about a minute in another scene, and I don’t even think she had a line! Did he really need to use Mariah Carey for that, just so we could all marvel at how plain she looks without make-up? The audience deserves better, and actually so does Mariah.

I do believe that every American should see The Butler, but take it with several grains of salt. I’m sad to say that I never paid attention in Social Studies classes, so I really don’t know as much about American history as I should. So I tend to believe every portrayal I see in movies. But, according to Breitbart.com, new information came out yesterday that Ronald Reagan biographer Craig Shirley begs to differ with the portrayal of that president in regards to his stance on race issues around the world. So you have to remember to employ what I think is one of the golden rules of everything in life, “believe half of what you see and nothing of what you hear.” Remember, as good as it is, The Butler is not a documentary, but rather a scripted screenplay based on history.

So that’s pretty much all I have to say on the subject. I’m glad I saw it, and I’ll be interested to see how this awards season plays out. It’s only the second movie I’ve seen this summer, so I don’t have much else to compare it to. But every year, it seems to me that the voters of the Oscars, the Golden Globes, the SAGs, etc. are a bunch of sheep who just want to vote the way they think everybody else is voting. So I won’t be surprised if The Butler wins everything. And just how many reviewers will be clamoring to be the first to say “The Butler Did It!,” especially if it wins everything at the Academy Awards this year? Actually, since this is copyrighted, I guess I’m the first one to say! So, yay me!!! 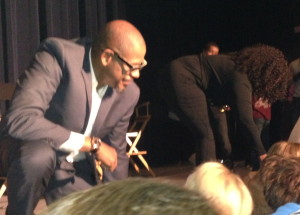 Forest Whitaker and Oprah Winfrey leaning over to talk to the audience members after the post-screening Q&A. Photo by Karen Salkin.

[Note to people who read my Oprah story from yesterday: I promised to tell you something that Oprah proudly announced that she did on the set during shooting. She thought she was so wonderful in doing this, but I just thought it was totally obnoxious of her. So here it is: She said that she wanted to keep the intimacy that her character of the wife would have with the husband played by Forest Whitaker. He was always really into the work, as well every actor should be, and would keep headphones on during hours of aging character make-up, and at other times, too. He told the assemblage of how he just needed to concentrate and connect with the character. (Trust me, he expressed it much better than I just did. And he even told a few of us privately, after the Q&A was over, of some ways in which he did that.) So, knowing how intense an actor he is, I feel she should have just left him alone, but she said that every time she saw him, she rubbed his back or grabbed his arm or whatever, just to say hi and keep the intimacy going. Gag me with a spoon. Obviously, Forest is too classy to tell us how that affected him, but even I know that if your fellow actor has headphones on, and is carrying the whole film, just leave him alone and interact with him once the director yells, “Action!” So that’s my little private story for you, and you can make of it what you will.]