[Note: Since I’ve had the privilege to serve on the Screen Actors Guild Nominating Committee this year, I’ve gotten to see all the important movies prior to their releases. I’ve already reviewed a few for them earlier on this season, and now I’m trying to get to most of the rest in the next month or so. At this point, I don’t know which of them are already out in theaters, but I hope I’m publishing these reviews early enough to help my readers with their decisions of which films to see, and which to skip. And unlike most other movie critics, I’m not here to give you my “Intro To Film” analysis; I’m just letting you know how good or bad it is.]

The Book Thief is the best movie of the year. Period. On every level.

Don’t be scared to see it because of its subject matter; it’s far from the most painful Nazi movie ever made. It’s just one story of what happened in that time, not of concentration camps, as I had feared. And it’s fictitious, which makes it even easier to take. (Unlike my mother, a voracious reader, I don’t have time for books, so I wasn’t aware of this novel.) 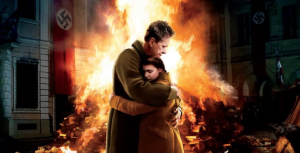 The story actually has a lot of charm, and the performances are perfect. Geoffrey Rush is his usual what-every-actor-should-be self, Emily Watson makes you forget she was ever an attractive ingenue, and what the two children were able to accomplish is just stunning.

Twelve-year-old Sophie Nelisse, in the title role, is mind-boggling. I was absolutely positive that she was an Eastern European child, but she’s actually French-Canadian. I’ve rarely seen another young performance to rival this one, except perhaps Dakota Fanning in I Am Sam a dozen years ago.

And little Nico Liersch as her male partner-in-crime could not have been more perfect. He plays every emotion so honestly, with no melodrama. And he’s absolutely beautiful, to boot!

I was lucky enough to get to hear Geoffrey Rush speak after the industry screening, and he could not stop praising little Sophie. He’s an actor’s actor, so if he says someone is great, we know that person is. (If he ever taught a master class, that’s one I’d actually wait in line to get into.)

His insights were really fascinating. When the bland moderator asked him how he and Sophie got up to speed to play father and adopted daughter (with a relationship so wonderful that I’m sure a lot of us are jealous of it–I know I am,) Mr. Rush subtly explained, “We were really lucky; we didn’t have an acting coach who made us do bonding exercises.  I would have thrown-up.” I never thought about him one way or another previously, but now I love that man.

One odd thing is that in his acting, his body is so still unless otherwise necessary to the character, but in person, he has Joe Cocker-esque hand movements! He just could not calm those puppies down. They were hypnotizing.

Even though the obviously insane majority of the SAG Nominating Committee (and the idiots at the Golden Globes, too) chose to ignore these incredible performances, I’m imploring you to please go see this movie. You’ll be a better person for it.