[Note: During this week leading up to the SAG Awards, I’ll be reviewing a quartet of the top films of the year. Any of the important ones that I don’t get to this week, I’ll review the week before the Oscars. And please don’t miss my critique of the best film of the year, by far, The Revenant, which you can still read here: itsnotaboutme.tv/news/movie-review-the-revenant.] 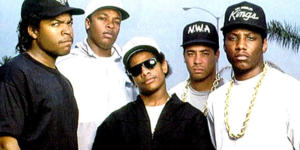 This story of the formation of the ’90s rap group N.W.A., and the aftermath, is actually a really interesting one.  I don’t know exactly how true every detail of it is, but oh well. (The same goes for the rest of the “based on a true story” films.) [Note: I do find it a tad strange, though, that they totally left-out all of Dr. Dre’s well-documented violence against women. That major omission made him look like too much of a good guy.]

I was a hip-hop club promoter during the end of the millennium, and my DJs always played a lot of the hits that were in this film. But I never for one second thought about where the music came from. So, I was riveted to the screen (even though I had many more questions than there were answers in the film.) 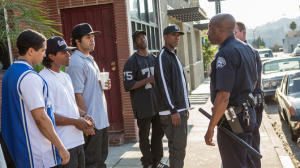 In case you haven’t even attempted to check it out, because it looks to be a “ghetto flick,” trust me when I tell you that I think you should. Don’t let the topic deter you; I was invested the whole time. (And, as much violence as there is in Straight Outta Compton, it’s actually much less than in Black Mass. And even The Revenant!)

A funny thing is that, because the dialogue is mostly “urban,” I assumed we’d need subtitles. But, this is probably the first movie I’ve seen all season where I could understand almost every word! I was shocked. (Well, I have to admit that there were tons of expletives, which are always easy to decipher.) I definitely needed subtitles for Tom Hardy’s dual role in Legend, but no such prob with Straight Outta Compton. At all.

But, to continue weighing-in a bit on the stupid Oscars “race” controversy, this movie’s story is all good to know, but, on the whole, the film is definitely not worthy of a Best Picture nod. (But neither are some of the others, in my humble opinion, such as Spotlight and The Big Short. I didn’t much like any of the films this year, outside of the amazing The Revenant. As Mr. X said, the idea for each film is better than the execution of it.) [Note: That statement of his, of course, does not include the aforementioned The Revenant, whose achievements in filmmaking he finds as astonishing as I do. And, as probably anyone who knows anything about the business does, as well!] I think many of the AMPAS voters may have just passed on seeing Straight Outta Compton, because of its subject matter, but, even had it been universally seen, and still not been nominated, I’m fine with that. 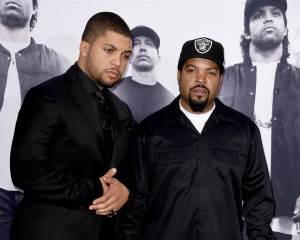 All those young actors are good, but not award-worthy individually. I’m still impressed with them, though.  Most are first time actors, which is just nuts.  And I loved seeing Ice Cube, Jr. (O’Shea Jackson, Jr.) who looks just like his dad.

But, different from the Oscars, where there’s the “Best Picture” category, the SAG Awards are for acting only. So we have the unusual category of “Best Ensemble.” And for that, I am voting for this cast because they deserve it, compared to the rest of the nominees. Shamefully, the cast of The Revenant was not nominated (so now the Native Americans can “boycott” this one,) and that’s for whom I would have voted. But, really, this whole Compton cast is excellent, especially for guys who had either never acted before, or have done just small, almost extra-work roles.

Really, the inane boycott of the Oscars almost turned me against these guys, but I reminded myself that I’m always fair. And, as a cast, they’re great. At times, I thought I was watching a documentary about N.W.A., since I had never seen many of the real players before. The guy channeling Suge Knight, R. Marcos Taylor, scared me as much as the real Suge does! And he’s a stunt guy, not an actor, per se. 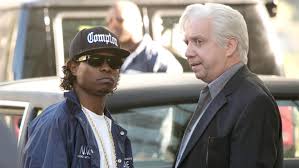 I predict big things for most of these actors in the future. I loved Jason Mitchell, who plays the pivotal role of Eazy-E. And the guy who brings Dr. Dre to life, Corey Hawkins, just joined the big-time, by taking over for Kiefer Sutherland as the star of the upcoming 24 reboot! Heck, this is even the first time that Paul Giamatti hasn’t bothered me!

So, there you have it. If you can stand witnessing the awful treatment of both young black guys and policemen, (which is a hard topic these days,) and can stomach the constant use of the “N-word” and the “F-word,” I say, see Straight Outta Compton. And the music is great!