I actually really enjoyed myself at this one. I went to a recent industry screening of Best Animated Film Oscar nominee Puss In Boots only because it was 3-D, which I love. But it featured two of my most hated things ever—cats and e-words. (In case you’re not familiar with what I refer to as “e-words,” because I can’t even bear to say, write, or even think the word, it’s what Humpty Dumpty is, who was the “co-star” in this movie.) 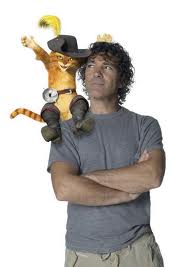 Despite those two, I loved it! The animation was great, the voices excellent, and the 3-D as wonderful as ever.

The only small problem is that we needed sub-titles for Antonio Banderas’ voice. And he was in every frame!

There’s not much to say about the story. It’s cute, has a beginning, middle, and end, is short enough to hold the attention of most viewers, and is perfect for kids and adults. And was an absolute joy after an entire season of nothing but downer films. I wish I had seen Puss In Boots in-between all the others, to break-up the depression!

There was a Q-and-A with Antonio after, and I was surprised by everything about him. He was intelligent, insightful, and articulate! Everything he said was educational for those of us in the biz, (which was just about everyone, in this case,) or entertaining. Or both. And he wasn’t at all full of it, like just about every other actor speaker I’ve ever heard at these things is.

And he really understands comedy. I was surprised to hear that he knew this would become a spin-off of Shrek…in 2005! That’s some insight, all right.

This review is short and sweet, to match the film.