Since Steven Spielberg’s mother, Leah Adler, was one of my biggest fans when I was doing my show, Karen’s Restaurant Revue, (yeah, I know–a lot of good that did me!,) I feel terrible telling you how much I did not like this film of his. At all!!! One any level. (Sorry, Leah.)

As I stated on Monday, I think that Daniel Day-Lewis will win Best Actor for this performance, really undeservedly so, because the voters don’t want to admit that they fell asleep during Lincoln. And they’re jealous of Hugh Jackman’s gorgeous looks and charming personality. And they think it makes them look more intelligent to vote for DDL. And Lincoln is about an American, not a Frenchman. As I said then, the list goes on and on.

I’m really a big fan of Mr. Day-Lewis, as both an actor and a human being. I think he’s great on the first count, and lovely as the latter. But this whole movie was such a supreme snoozefest that it’s hard to judge exactly what he was doing. Let me tell you, this was no My Left Foot! [Digression on that one: Mr. X was out of town when that film was out, and a really fun major film producer pal of mine asked to take me to dinner and a movie that Saturday night. What lonesome gal could refuse such a kind offer! I was expecting a night filled with our usual lots of laughs, but what I got was My Left Foot! OMG. Neither one of us looked-up the plot beforehand, because I never do, and it had just come out. I don’t know how I stayed home alone that night afterwards. I cried until morning. What an upper of on evening. But the second he came on-screen, I became a forever-after Daniel DayLewis fan.] 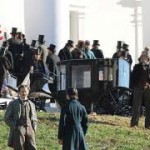 Okay, you know that personal story I just told? Even that was a million times more interesting than Lincoln!

On the other hand, Mr. X said the film is “extraordinary, intelligent, and deep.” All things I’m not! No wonder it wasn’t up my alley!

I was shocked to see Mr. X sitting there, glued to the proceedings. I had even given him a free pass to not join me for this one. And then I realized that, for him, it was just an extension of his daily political TV watching! He was riveted!

In the run-up to the voting for the SAG Awards, we often had choices of how to see each film with nominated performances. You could see it either in a theatre, at an industry screening, some on-line, and some on a DVD sent to our homes. Private screenings were always my first choice. I feel movies are made to be seen on a big screen with a great sound system, with others to enjoy, or not, it with. The ones I had to see at home, I always watched at night, to emulate a theatre atmosphere. Even with a great new giant TV, or crisp computer picture, I was disappointed if I missed one at a theatre. But, let me tell you, I’m beyond thrilled that, after passing on numerous screenings and theatre opportunities for Lincoln, I saw this one at home, where I could jot down my thoughts during it, and let my mind wander creatively as this wore on and on and on…and on. Staying in my seat elsewhere would have been tantamount to what I did in boring classes all through school.

So, here are some notes I accrued during the interminably long Lincoln. (Well, the parts I was able to stay awake for anyhow. Hey, don’t judge—I already knew the end!!!):

First let me state here and now that I have a 147 IQ, not to boast but to show you that I understand a lot in life. But I was lost from the beginning of this film.

Why does the little son have an English accent? He’s Australian in real life, and playing an American kid who’s as American as they get! He’s the President’s son, for goodness sake! Were there no American actors who could play an American??? First an Englishman playing our Prez, then this.

I don’t get the fuss over his choice of voice as Lincoln. He sounds like Bill Clinton!!! Good choice to emulate. I mean it! And we have no idea what the real Abe sounded like.

Who had patience for this? I assume only history geeks.

But I’m thrilled I own the DVD because I always have trouble sleeping. But I have a feeling that won’t be a problem anymore!

This is so wordy! The musical 1776 was easier to follow than this.

No wonder this dude got shot! If he was as boring as this film about him is, I would have done the deed myself.

The cast of The Impossible wasn’t nominated for a SAG Ensemble Award, but these people were? That’s nuts. The actors in this were all excellent…just as they should be to have gotten hired in the first place! But I feel that no one went above and beyond, like in The Impossible. Especially those kids in the latter, who gave it their all.

Like Tommy Lee Jones wasn’t unattractive enough, they had to give him that wig!

Everyone has a different accent. Crazy.

David Strathairn is a snooze and a half. Always.

I had on Tommy Lee Jones’ bored face (from the Golden Globes ceremony) throughout this whole film!

Who wants to see a movie of all unattractive men? They needed Hugh Jackman as…anybody! Even someone made-up, just to give us something good to look at! Was no one handsome in that day??? How did they sell snacks in the theatres this was playing in, if you get my drift?

I recognize its cinematic excellence, but I’m still bored to tears. And I’m only a half hour in!!!

The only way to watch it is at home with an iPad on our lap, so you can look everyone up.

How did they distinguish amongst themselves? They all have the same description, more or less. What did the casting notes call for?: men who are bad-looking, with bad teeth and a beard?

Daniel Day-Lewis is excellent, as he always is.

I may be shallow, but if I’m going to spend two-plus hours watching basically an all-male movie, the cast better darn well consist of Hugh Jackman, Simon Baker, Tom Welling, Will Estes, and Maxim Chmerikovskiy!!!

Have I mentioned I’m shallow? But that’s it for my review of Lincoln. Actually, that’s it for all my reviews of films with Oscar nominations before they get handed-out this Sunday’s. Whew.

Next week, my review of the Oscars themselves is up first, and then we get to the fun stuff—the gifting suites and parties. (Now would be a good time to refer to my first sentence of the last two paragraph.)