Trending
You are at:Home»Uncategorized»MOVIE REVIEW: LIKE CRAZY
By Karen Salkin on December 22, 2011 · Uncategorized

This love story is interesting enough, but fraught with pain.  I’m sure very many people will relate to the story, in one way or another, if not nearly exactly, and I think there’s something comforting in the pain to see it on the screen.

The camera work for the first ten minutes or so made me physically nauseated, and I actually thought of leaving the screening for awhile there. If that happens to you, I’m suggesting that you hang on because the camerawork gets better and the journey is worthwhile. (At the Q-and-A afterwards, we found out that some of those scenes were shot with just a hand-held camera, which explains the shakiness.) 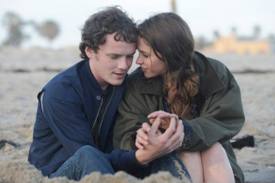 I’m not giving anything away to say that Like Crazy is about a young couple who fall in love in college in Los Angeles, but because of her student visa, she has to go back to England after graduation.  My stomach was in knots almost the whole time.  I actually spent a lot of time thinking about the story for days afterwards.

I realized while writing this that neither of them seemed to have friends to talk it all over with, which I found a tad unrealistic. But it’s basically the true story of the director, Drake Doremus, and his Austrian wife, so I guess it can happen. I also kept wondering why they didn’t just get married when the problem of begin apart so much arose, and they were still so much in love.

There were two parts of the story I identified with.  When I first came out to L.A. as a teen-ager, and had a great time with my summer program pals at UCLA, I knew that if I went back home then, the whole thing would seem like a dream to me, so I didn’t want to leave, either.

The other was serious for the heroine here, but amusing to me, when mine was resolved.  When she’s trying to come back into the United States, with her boyfriend at the airport to pick her up and get on with their lives, she’s detained by Customs, a horrible feeling that I experienced for myself. One time, when I arrived alone in Toronto to see Mr. X open in a play there, customs took me into a private room for a grilling.

They inquired as to my business in their country, and when I stated it, they then asked how much cash I had on me!  Those who know me, know that I don’t really attract money, so I had just about fifty dollars, at most, and told them the truth, not realizing that could be a problem.  They then informed me that I was being deported!!!  While Mr. X was waiting at the gate for me!  I was hysterical and begging them for an explanation.  They said that it’s suspicious that someone would enter their country with that little money, so I must be there for a suspicious activity!!!  I explained again that my boyfriend was earning the money, and it was plenty for both of us.  I guess they never saw a kept woman before, because it didn’t get cleared up until he was brought in to vouch for me!  It’s funny now, but it was quite the ordeal at the time.

Now, back to Like Crazy. [Note: before I left L.A. for the holidays, I had written myself a note to “write like crazy” in New York.  When I saw it last night, I spent a bit of time wondering what I had planned to spend so much time writing here.  Then I realized that I meant “write” the review of “Like Crazy.”]

If you’re like me, and need the storytellers to finish out their story, and not leave it up to us, then the ending won’t be satisfying. I was hoping that someone in the post-screening audience would ask what the ending was, and I got my wish–that was the first question offered!!! The panel, consisting of the above mentioned director and the two stars, Anton Yelchin and Felicity Jones, (who could play Amy Winehouse one day–just remember that you heard it here first!,) was too jokey (yet not amusing at all,) and was led by some terrible older woman moderator who seemed to just be flirting with Drake the whole time, so we never really got the answer. Since the real couple it’s based on is now divorced, I tend to think the ending wasn’t a good one in the film either.

But, outside of the innate sadness, it was interesting to witness a whole multi-year relationship in ninety minutes.  And I did leave the film with one positive thought–this story shows that anyone can adapt to their circumstances.  It’s just better if you don’t have to.