Being a lover of Westwood Village, (as it was my very first destination when I arrived in LA as a teen-ager,) I had passed by this Greek restaurant on Westwood Boulevard many a time.  (It’s not in the Village itself, but just a few blocks outside it.)  And then a friend came to town from San Diego recently, and mentioned that he wanted to try it. But I was never able to make the time until the other night, when I was invited to a sumptuous set dinner for a few select members of the press. 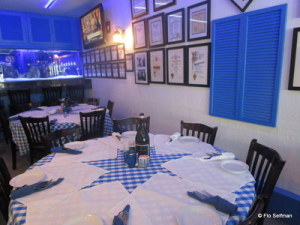 Since I had assumed that there would be a lot of foods I don’t eat, (including beef, lamb, and olives,) I brought along one of my trusty associates, Flo, who loves Greek food, and was excited at the prospect of finding a new ethnic eatery.

As we entered and were greeted by owner Roozbeh Farahanipour, and his pastry chef wife, Rana, the very first thing Flo noticed is that the “restaurant  is so clean; it looks brand new,” even though it had been there for over thirty-five years!  She also mentioned that the “bright white walls and vivid blue accents are very appealing.”  The intimate interior reminded me of the eateries in New York, so I instantly had a warm feeling towards it. And the Greek music that played throughout our stay, at a soft volume (thank goodness,) added to the ambiance. 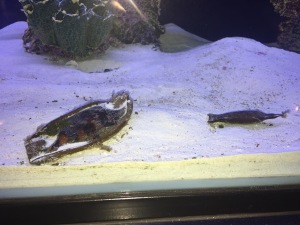 The two different kinds of shark e-words in one of the three fish tanks. Photo by Karen Salkin, as is the big one at the top of this page.

There’s a trio of fish tanks on the walls, which is very relaxing. The biggest one contains two soon-to-hatch sharks, which the rest of the guests were fascinated with.  I pointed-out that they’ll have to move all the other fish once these guys hatch, or else they’ll be the only two entities in that tank, if you get my drift!

After mingling for a while, we finally sat down to our very lengthy and delicious repast.  There was something for everyone.  We began with a potpourri of cold appetizers.  I tried only the hummus and tabouli, and found them both to be superior.  Here are Flo’s impressions of the others: She said that the taramasalata, which is red caviar whipped with olive oil and fresh lemon juice, was “light and not very fishy,” while the melitzanosalata, which is eggplant whipped with Greek yogurt, tahini, fresh garlic and Greek herbs, “was very tasty.” 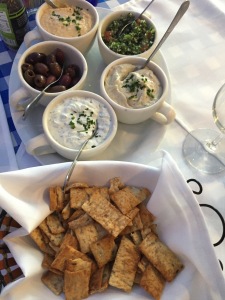 Then came a fun surprise for all of us—Rana brought out the saganaki flame, which is cheese soaked in cognac, and she…lit it on fire!  We all oohed and aahed.  And begged her to do it again!  (Which she did.  Four times, in fact, because there was one for each table of guests.)  It was very flavorful, too. Flo said the cheese was “mild and stretchy,” and that she could have eaten it all night. [Note: The big photo at the top of this page is of that special presentation. Photo by Karen Salkin.]

I almost passed on the avgolemono soup because Roozeh described it to me as chicken broth with e-words, but being the good sport I (sometimes) am, I said I’d try a taste.  But guess what?  It was my favorite dish of the night!  First of all, it wasn’t broth at all!  And second, there were no chunks of e-words.  It was basically cream of chicken soup with rice, minus the cream.  And it was yummy!!!

We realized later that we didn’t get to sample any salads, but we were so full by then that we didn’t even miss it.  And we can have salad anytime. The entrees were the main attraction, and there were plenty of those on the menu! 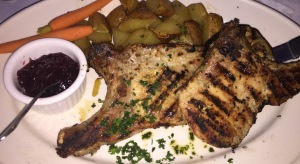 Being the picky eater that I am, I appreciated that we each got to choose our own dinner, which also made the vegetarian at my table happy. (I’m always thrilled when I’m not the only pain-in-the-butt at an event!)   There was a real variety of dishes; just at our one table of six, where we each chose something different. Flo wanted to be “traditional,” so she went with the pastitsio, which is a Greek signature dish. She told me, “The main ingredients were perfectly layered: macaroni-type pasta formed the base, topped with lightly seasoned ground beef and a firm layer of béchamel sauce and feta cheese; an unbeatable combination.”

But I believe that my pork chop was the winner.  Not only were the accompanying roasted potatoes and carrots delicious, as well, but it came with something I’ve never seen before—a side of cranberry sauce!  What fun! 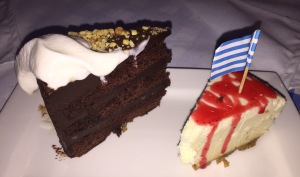 Flo and I were too full for dessert, (and I’m not supposed to eat sugar, anyway,) so I brought some bites of the non-traditional chocolate cake and cheesecake home to Mr. X who said they were “moist, rich, and better than delicious.”

This was a wonderful introduction to Delphi Greek.  I definitely plan to go back there with my posse to do a full review for you before the year is out.  Until then, you cannot go wrong with any of the dishes I just told you about.  As they say in Greece, “Oopa!!!”