I wasn’t planning on writing any movie reviews this year because of a combo of being time-constrained, (because of all my sports-watching, I admit,) and mostly not-special films, (save for Belfast and Coda.)

But I was so angry that I had wasted even a nano-second on the awful and confusing Licorice Pizza , (which is one of the worst movies I’ve ever seen!,) that I just sat down and started banging-out all the reasons I hated it, to warn you guys off it. There are soooo many reasons for my disdain, that what was meant to be a mini review became this big one. 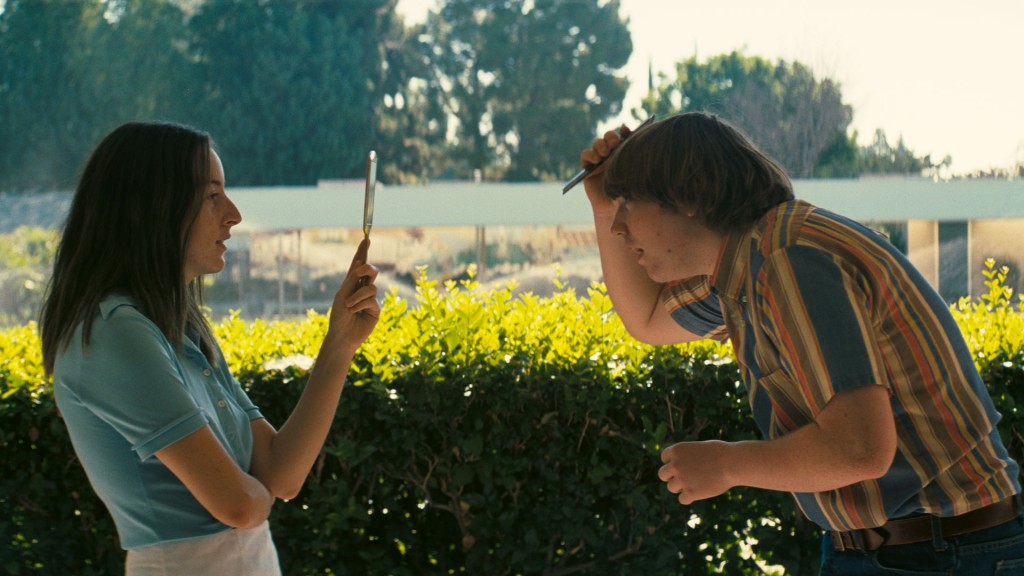 When they first meet, with her awful hunched-over posture. He’s taller than she is, so she should be standing up especially straight!

So I wound-up doing the minis of all the rest of this season’s films separately, (which you can read here: itsnotaboutme.tv/news/movie-reviews-mini-movie-reviews-2022.) Now on to just this show business travesty:

You know how some fans are suing the producers of Yesterday because Ana de Armas appears in the trailer but not in the actual movie? Well, I want to sue Licorice Pizza because the promos make it appear that there is fun in the movie, when it’s entirely devoid of that!!!

Here are just some of my reasons for wanting my money back, when I didn’t even pay to see it!:

First of all, the beginning made the premise confusing right from the get-go. When the male teen was asking the girl out at his high school, how were we to know that she was not his fellow student? It seemed like they totally knew each other. It also made no sense that she was being so nasty to him. And she never lightened-up throughout the film! 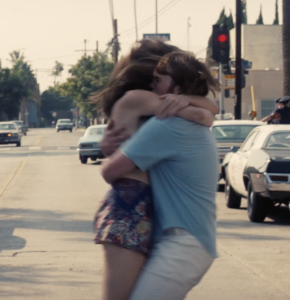 The pic of them kissing disappeared from the internet, so this scene of body-to-body contact is as close as we can get to the inappropriateness between the pair.

And then I got upset when it was revealed that the woman is in her mid-twenties, and the boy is…fifteen! Are we supposed to just accept the pedophilia aspect of the film, which is basically what the entire story is predicted on? You can’t have a twenty-five-year-old making-out with a fifteen-year-old, for goodness sake! We’re supposed to think that’s charming??? That’s disgusting, not to mention illegal!

Yes, it is somewhat normal for a teen-age boy to have a crush on an older woman, (believe me!,) but it’s weird for her to constantly hang-out with him. Where are his parents in all this? And, despite the director’s protestations to the contrary, (Paul Thomas Anderson said in an interview, “There is no line crossed, nothing but good intentions. There isn’t a provocative bone in this film’s body,”) they do kiss at the end, which, as I’ve mentioned, is illegal. And it’s intimated that that kiss means they’ll be a couple from then on. Ewww. Just ewww.

Plus, there’s zero chemistry between the two actors, Cooper Hoffman and Alana Haim. (By the way–I think he may have a bit of potential down the road, but going by this performance, she does not—she’s on one note the entire time. I can’t imagine that there are many other directors out there who are anxious to work with her.) The movie shows absolutely no reason why the kid would be obsessed with her. It looks like he loves her at first sight, but—let’s face it—she’s not exactly Grace Kelly. Or Goldie Hawn. Or Jennifer Lawrence. Or Saoirse Ronan. Or even Selena Gomez. Or even one of the Fannings! I could go on and on. We never see why he likes her to begin with, or ever, actually. (Nor, to be fair, she him, outside of that she’s so miserable and not attractive that she would be happy that any guy likes her.)

And her character is always snarling and unpleasant, and has nothing else to recommend her, such as brains, charm, wit, personality, athletic prowess, or business acumen. So I don’t get it. The role (in both the writing of it and the acting) really needed a female who could, at the very least, be cute and vulnerable. (Please see my list in the previous paragraph.)

And speaking of charming, (which I did a few paragraphs back, for those sticklers out there,) how did Bradley Cooper ever get a SAG nomination for this film??? I’m ashamed of my fellow actors for that ridiculousness. It’s like the people on the Nominating Committee just want to be able to tell him they nominated him if they ever bump into him!!! 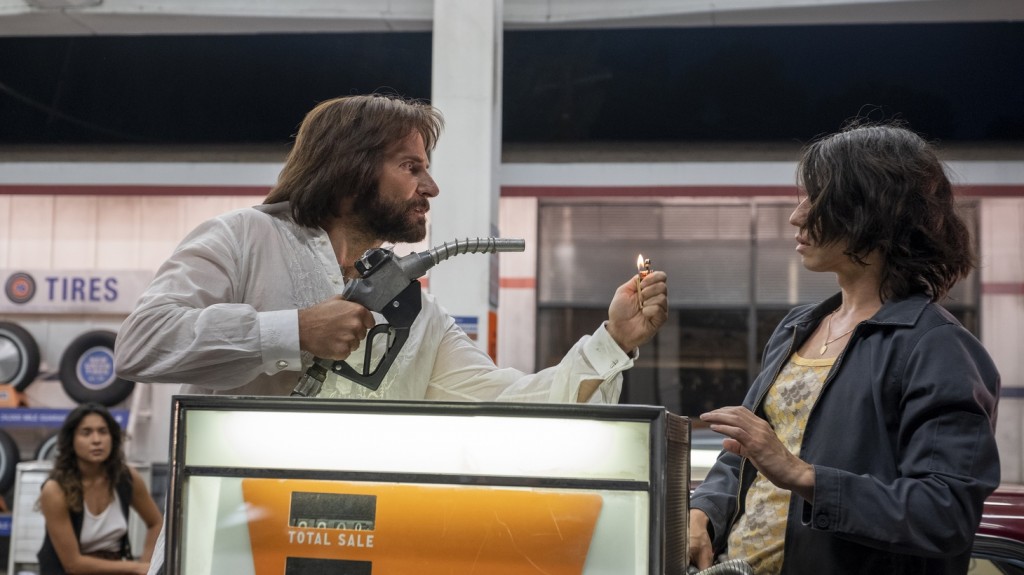 Second worse to the pedophelia is that nothing is ever explained. Does the kid really own a PR firm, and do his parents really work for him? Why do we never see his dad? And how does a fifteen-year-old own a car? Which he never even drives because he’s not old enough to do that yet.

The movie makes it seem like one can walk, (or run,) between Encino, Sherman Oaks, and North Hollywood in a matter of minutes, but you can’t even drive among them in that time!!! I’m sure the timing wasn’t much different in the ’70s.

When the teen tells his younger brother that he’s going to marry the woman, I erroneously assumed that meant the movie would progress years to that point, (especially because both actors look older than their movie ages,) where they had either stayed friends all along, or got together when he was of age. If that had been the case, Licorice Pizza would have had a modicum of a chance of being a tad okay. But, sadly for those of us who wasted time on this creepy tale, it did not. (As that scene unfolded, I flashed on France’s President Macron, who grew up to marry his high school drama teacher, whom he has stated he had always had a crush on. But they never dated until he was eighteen and out of school.)

And time in Licorice Pizza was portrayed terribly. I had no idea what was going on for most of it. Did the kid never go to school? Nor ever work in the biz again after doing several movies and commercials?

And what was the entire story even about? (Besides two and a quarter hours, which is waaay too long for this muddled mess.)

And why are the main characters always running??? That stupidity was the icing on the bum biscuit for me. 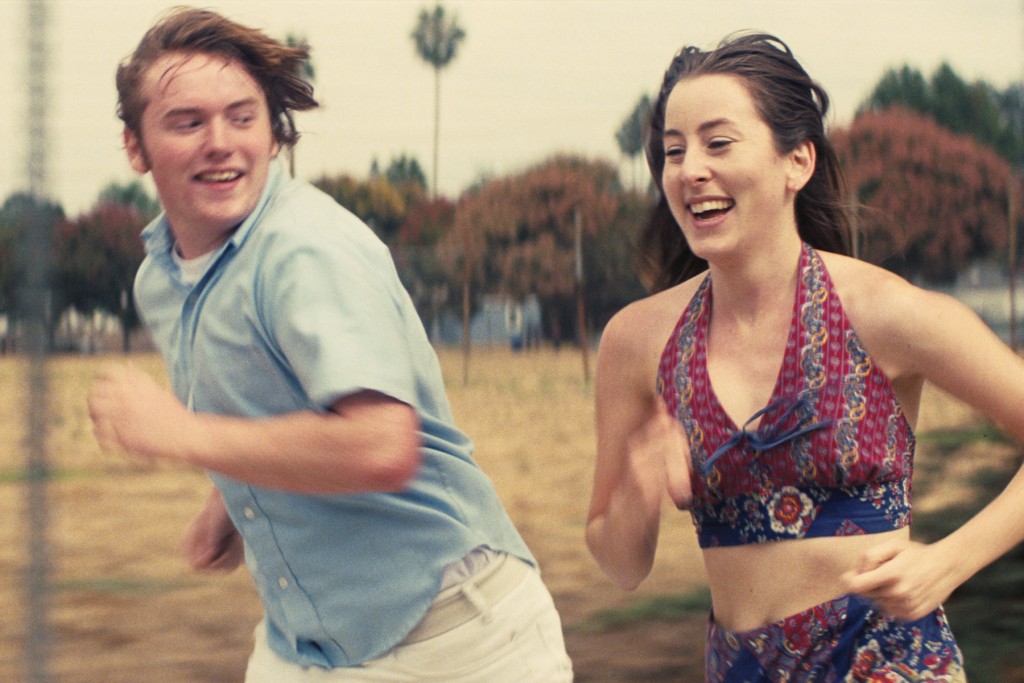 About twenty minutes in, it dawned on me that I didn’t like it, at all, and it kept getting worse. I had no idea that Paul Thomas Anderson had written and directed it, but when I saw his credit at the end, it made sense—I have never liked any of his films. I’ve seen seven of his nine works, and hated all of them. I feel bad saying that because he’s supposed to be a good guy. And his films do well. But he owes me now. I kept expecting this movie to get better because of all the over-gushing review lines in the ads for it.

The only realistic thing about Licorice Pizza, at all, is the depiction of a commercial audition. I’ve been on enough of those for the fictional scenario to have made my skin crawl. I’m glad the teen-age character was oblivious to the attitudes of the people in charge. He was a giant too-old kid in a room where all the other candidates were tiny and looked exactly alike. When I was doing my TV show, I always stuck-out in those rooms, as well. I was constantly called in to audition for roles calling for male comics, as the only female, because the casting people said there were no other funny girls at the time! And if I went on an audition for females, I was the only one with long hair and make-up; I refused to look goony to fit in. When the people in charge would come out and peruse the waiting room, they’d inevitably turn back and say, “You, with the hair—can you do something to look too glamorous?” I never fit into the commercial mode, so I felt for the character in this instance. 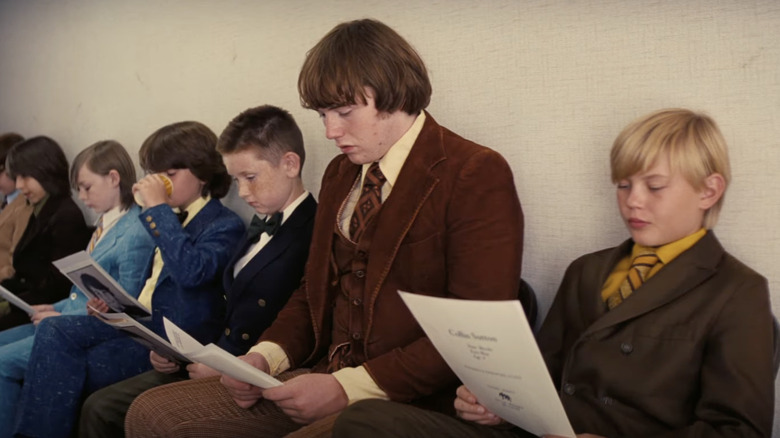 This scene is all too familiar to those of us in the biz.

Outside of that one scene, there is absolutely nothing to recommend this film, on any level.

And, on the shallowest of notes, the movie has nothing to do with licorice nor pizza. (It was the name of a record store in LA during that time period, but how many viewers would know that?!)

I did enjoy seeing old school LA, though. That was fun, albeit a tad depressing.

Good thing I didn’t try to cram all these thoughts into a mini review, after all.

For more of my movie bon mots, during the live Oscars this Sunday, please follow me on Twitter, @MajorCelebrity. I hope at least some of my tweets will be positive. (But don’t count on it!)