Let me begin this review of the film version of the musical Les Miserables by stating that Mr. X is perhaps the fairest person in his assessment of things, and rarely agrees with me. I have to be about a thousand percent correct for him to back me up on anything. And we agree on Les Miz. Actually, he goes way farther than I do in my not loving of this film. A few hours after we saw it, when we were still scratching our heads over the general praise of it, he said the movie was “soulless,” and all anxiety.” He added, “I didn’t buy the singing. And why so many close-ups?” I’m afraid I have to agree with him, on it all.

I know what he meant; halfway through, I noticed that I hadn’t gotten choked-up at all, not even once. And that non-feeling continued throughout, even at the end, which should have made me a sobbing mess. I cry at everything! Even Hallmark commercials. (Well, especially Hallmark commercials, But have you seen them?) And Les Miz left me caring about no one in it, except maybe Jean Valjean; but, if at all, just a quarter of an iota. 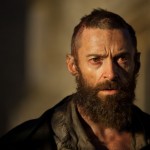 Who could have ever imagined that Hugh Jackman could look this bad??? That proves he's a great actor!

I also totally agree with Adam Lambert’s assessment of the singing, except for Hugh Jackman, who’s a real singer. He’s appeared in musicals throughout his career. His voice is actually my second favorite to that of Adam himself! (In case you missed his statement, and I’m paraphrasing here, Adam said basically that they should have hired singers for the film, rather than actors who can sing a little. But with Hugh, you get both, so Adam should have said he doesn’t mean Hugh. But he didn’t, which disappointed me a bit.)

Mr. X and I just don’t get how people can praise Anne Hathaway’s performance. I usually cry anytime I hear the song she sings in the film, I Dreamed A Dream. I downright balled when I first heard Susan Boyle’s rendition, as did everyone in the world, judging by how viral the video of her singing it on Britain’s Got Talent went. It was so painful and came from deep down inside her. In Les Miz, all I saw the whole time was…Anne Hathaway being Anne Hathaway! Nothing new or tender here. I witnessed her trying to be a person in pain, rather than being a person in pain. And why the fake English accent? This was France! What was she doing?!

And why the big deal over the fact that she had her hair cut on set? Who cares? That was so nothing for anyone to make a fuss about. She should have cut if for Locks of Love in real life, and then the woman who cut her hair in the film, for the two seconds we saw of it, could have cut a wig! Now, if Anne had had her teeth really pulled-out, that might have impressed me.

By the way, many of you may know by now that I just can’t stand Anne Hathaway, on any level. But, I swear, I was prepared to be blown away by her in the film, and I’m always fair, so I knew I’d have to laud her. But I really, truly feel that her performance was like something out of a college Theatre Department class. At the end, when Anne came back on-screen with her fake-ness, Mr. X, who always gives everyone a break, said, “For those of you who were happy that Anne left early, no such luck.”

And don’t get me started on Russell Crowe! I actually feel that since this is a film, rather than a stage show, it’s sort of okay to have good actors rather than good singers. But when there’s no dialogue, and just all singing, come on producers, you’ve got to get with the program and hire actors who can sing at least a little!!! Russell was dreadful. Dreadful! I couldn’t take that nasality. It was awful. The film definitely needed a much stronger Javert. Actually, had he been much older, Adam Lambert would have been perfect! But then he would have stolen the show from Hugh.

Digression—looking at Crowe’s mottled skin so up-close and personal, I realized he could play Richard Burton. Anyone else think that, too? (I actually mean that as a compliment. I think he’s an excellent actor, just not in this one.)

And Amanda Seyfried can’t sing either. But I thought she started-out in Mamma Mia. Maybe her role didn’t sing. Her voice in this one was like nails on a chalkboard. Her singing was like an SNL skit, although everyone on that show, though not musical performers, per we, sing better than she. How did she win the part by auditioning? How did almost any of them? Tom Hooper, the director, is English, so maybe Brits have the same taste in singing as they do in teeth!

The film did teach me one thing, though–I thought that Hugh Jackman could never look bad, but I was wrong. I don’t know how they did it, but I sometimes forgot, for just one second, that he was who he is, my biggest celebrity crush. That’s how excellent his acting was. I love that he’s always so happy and smiley in real life, but was so totally serious as Jean Valjean. There was no hint of his real self here, which is great acting. Compare that to what Anne Hathaway did, and maybe you’ll know what I’m talking about, on both of their parts.

I do have to give this production one thing, though: I’ve seen the stage show at least three times, (circumstance, not desire,) and this is the first time I understood most of the words. Maybe the orchestra is too loud in person.

But I don’t get the fuss everyone is making over the actors singing live (on film,) rather than recording it elsewhere and lip-syncing on camera. Stage actors in musicals do it every day! Actually, eight times a week! And the movie would have been hard to do that way because the whole script is sung. That would have meant that they would have had to lip-sync an entire almost-three-hour production! I think that would have been harder to do than just sing in front of the cameras, especially with all the emotions necessary.

So, the bottom line on Les Miserables is: This is a far cry from the 1935 classic film version of the great Victor Hugo novel. (That film, which starred Fredric March and Charles Laughton, did deviate from the book in a few instances, as does this version.) I didn’t care about any of this one. But, having seen all the nominated performances, I really do think that Hugh Jackman deserves the Oscar for Best Actor this year. I’m sure that Daniel Day-Lewis will beat him, really undeservedly so, because the voters don’t want to admit that they fell asleep during Lincoln. And they’re jealous of Hugh’s gorgeous looks and charming personality. And they think it makes them look more intelligent to vote for DDL. And Lincoln is about an American, not a Frenchman. The list goes on and on.

(And it will again later on this week, when I review Lincoln for you.)