After seeing Kill Your Darlings, I had to come home and research the topic to figure out what I had just viewed. Not exactly the mark of a good film.

And since I like to go into films knowing little-to-nothing of the story, I was confused the whole time. I knew it had something to do with the Beat Generation poets, (Allen Ginsberg, Jack Kerouac, and William Burroughs,) but I was surprised to find-out that there was a murder involved. I’m not really up on this literary group, but I know a bit about them, and I had never even heard this story hinted at. It turns out that it’s a “previously untold” one. 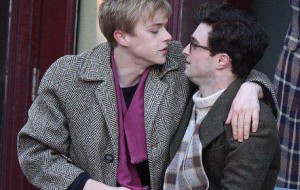 The performances seemed excellent, but since I couldn’t really tell what they were trying to portray, I guess not. The character of Lucien Carr, who’s the murderer, seems to be portrayed as totally gay, but in real-life, he always claimed to be straight. So that was confusing. The only people who knew the truth are deceased.

It was actually confusing from the beginning. It opened with what looked like a gay murder, and then moved to following young ’40s poet Allen Ginsberg from his home in New Jersey to his freshman year at Columbia University. Since I had never heard of him being involved in a homicide, I had no idea what was going on until almost the end. (I believe they do flash a sign near the beginning of the film stating that this is “based on a true story,” but you never really know what that means, in movie terms. In this case, I didn’t know if just the characters were real and the story was fake, or if the whole thing was true, or, as par for the course with films nowadays, partially true. Part of it is my bad for not reading up on what I was getting into in the first place.)

But worse than the whole confusion situation is how boring the film was. This could have been a riveting story, (which it was when I was reading about it later,) but the movie itself was pretty much a snooze-fest. The lighting was dark, (as were the sets and costumes, I guess befitting the times,) many of the scenes came out of nowhere, and most of it was just a muddled mess. I’m afraid I have to blame it all on the writer/director, newcomer John Krokidas. I applaud him for getting it all done, but it more than fell flat. (My friend just kept repeating, “I’m sorry, but that was awful. I didn’t enjoy it at all.” I hear ya, pal.)

There’s really not much more to say about Kill Your Darlings. I was impressed with one thing, though–the super-intense look of actor Dane DeHaan, who plays Lucien. It was surprising to see him at the post-screening Q&A then, because he had such a great look on film, but not so much in person. As an actor, though, I’m sure he’s glad it’s not the other way around.