[Note: Since I’ve had the privilege to serve on the Screen Actors Guild Nominating Committee this year, I’ve gotten to see all the important movies prior to their releases. I’ve already reviewed a few for them earlier on this season, and now I’m trying to get to most of the rest in the next month or so. At this point, I don’t know which of them are already out in theaters, but I hope I’m publishing these reviews early enough to help my readers with their decisions of which films to see, and which to skip. And unlike most other movie critics, I’m not here to give you my “Intro To Film” analysis; I’m just letting you know how good or bad it is.]

This movie was such a supreme waste of time that I don’t want to spend any more on turning my notes on it into a cohesive review. So, here are some of the thoughts I had as Gravity wore on. And on.

If this movie hadn’t been in 3-D, it would’ve been real close to a snoozefest. 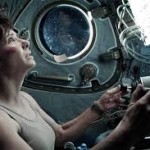 It was like All Is Lost, but with two people…and a lot of self-whispering.

These two films combined to show us all to just stay the frig on land!

But you can’t wait to see it on TV unless you have a great giant 3-D television!

Good thing Sandra Bullock never had Botox, so we could see the worry registered on her face!

Now what? (About the end.) No one may ever find her on whatever this piece of land is. ( A more literature-minded pal than I suggested that it didn’t matter because the triumph was that she did get back to land, so even if she dies here, she’s already a winner. Yeah, major victory for her, eh?)

If Sandra Bullock gets any nominations for this, we know that the nominators are either really dumb, or just voting for her because they like her as a person; there’s no way anyone could think that her performance here is anything close to superior. Heck, it’s barely adequate! [Note: we now know that she received nominations for at least the SAG Awards and Golden Globes, which, I swear, she absolutely does not deserve.]

The audience of actors with whom I saw it all laughed at the end!

I have a feeling people are gravitating towards this movie on just the names of the stars.

Okay, that’s it. And guess what?—I think this brief review is more interesting than the film itself! And that’s not saying much. For either one of us.