Since I make it a habit to never read about, or watch a trailer of, a film prior to seeing it for myself, (because every single review/blurb/ trailer gives away the entire movie,) I more often than not have no idea what to expect. (I just have Mr. X check out the genre because there is no way I will see a horror movie now, under any circumstances; I get way too many horrific images just reading/watching the news every day.) 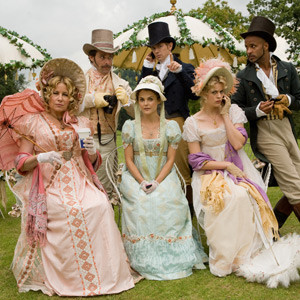 So off I went to see Austenland, thinking it was something about Texas and wondering why the word “land” was added on to the name of the city, and why they were misspelling the city to begin with! I was so pleased immediately when I saw that “Austenland” referred to an imagined experience in the world of Jane Austen. What a hilarious premise to begin with! (To those more literary-minded than I, I realize that most of you were aware of this as a humorous novel by Shannon Hale, but with all my obligations and situations in life right now, I unfortunately never get to read a book anymore.)

The whole story of how this film came to be made, including with a lot of help from Twilight series author Stephenie Meyer, is really interesting in and of itself, so if you have the time and interest, I really suggest you research the subject. But in this space, I just want to laud it.

Since I don’t like ruining the story for everyone, let me just say that it’s a lot of laughs. The cast was joking around after the industry screening I saw it at, indicating that they were worried that no guys would come see it since, on the surface, it appears to be a chick flick. But any guy with a sense of humor should enjoy it to. I know Mr. X will. Even though he wasn’t with me at this screening, I could hear him laughing in my head in so many instances. Part of that enjoyment will be due to seeing Bret McKenzie, one half of the comedy duo Flight of the Concordes, whom we absolutely love.

Even though Keri Russell is the star, and does a good job, the film is stolen, as usual, by Jennifer Coolidge. When isn’t it? Her name should be added to the old adage about no one ever wanting to work with dogs and children. I just know that if Jennifer is in a film, she’ll be the funniest one there, which Keri seems happy enough to have as the case in Austenland.

The actual underlying story of a romantic young women trying to find love may seem pat, but the execution is hysterical for the most part. And there are lots of twists and turns along the way, so pay attention the whole time. I don’t think they’ll be much drifting off of audience members in this one.

One interesting note is that I think that, in addition to the humor of the narrative and performances, I think the viewers can tell that the entire cast was having a blast shooting it, which makes us feel somehow a part of what’s going on rather than just observers, which is the case with most movies.

And that’s all I’m going to say about it. Even with the presence of Jane Seymour in the cast, of whom I’m not a fan in real life due to the condescending way she’s treated me on several occasions, (but that’s another story for another time—my show business tell-all book, perhaps?,) I thoroughly enjoyed Austenland. I wasn’t jealous of not being in it, even though I love doing comedies, until the very last super-colorful scene. I would’ve agreed to be an extra just to spend a day or two on that set!

So during this juicy Oscars-race season, in the midst of all the usual angst-ridden, depressing, dramatic films that are de rigueur to get nominations, do yourself a favor and make some time to see this one. I promise you’ll be glad you did.