I know that Argo will most likely win the Academy Award for Best Picture this year, but I’m not sure why that would be. (The win, not my thinking it.) My theory for its winning everything so far is that the voters for the various awards are trying to show that they’re so much smarter than the Academy members who snubbed Ben Affleck for a Best Director nod. So now, the body of the Academy, who voted in all the categories, will have to show that they’re not going be shown-up by members of the other boards (like the DGA, Golden Globes, BAFTAs, etc.) so they’ll have to make-up for his snub by voting for the film itself. 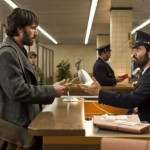 It was a good enough film, I feel. But one I forgot almost the second it was over. I usually ruminate on films I’ve seen for at least a week after. But this one just vanished from my mind. I wasn’t even particularly tense while watching it.

Mr. X, whose opinion I actually trust more than my own in all things entertainment, (because he’s a gazillion times better actor than I am, and has worked more than most people in this biz have,) said basically, “eh,” when it was over. He gets the fuss less than I do.

As I’ve been working on this review for weeks, it finally occurred to me that I have absolutely no opinion of this film! There’s nothing to say about it. It was neither here nor there. It’s evoking nothing in me, which is so rare! I always have fierce feelings…for everything! But, I’m jut not getting anything towards Argo. At all.

So, since Mr. X was not a fan, and I feel nothing, why don’t you guys tell me why it’s gotten so many accolades? The Comments section, below, is all yours. Most people with whom I’ve discussed the film say they think it was excellent, but when I ask them why, they’re blank. Nothing was particularly good or bad; not the acting, directing, story, tension factor (since we all knew it worked-out fine,) really nothing. Yet all categories have won some award this season, and are touted to be getting more at this week’s Oscars.

So, please let me know what we all are missing about Argo. If there are no comments, either way, I’ll take that as a nod that you all agree with my “nothing” assessment.