If you’re reading this on any device that involves plastic, or you’re using eyeglasses to do so, and maybe enjoying a beverage out of a plastic bottle, you have old school inventor Leo Baekeland to thank. And I know that not because I paid any attention at all in science class, but because I just watched All Things Bakelite, a fascinating documentary on the invention of a substance that I can just about guarantee that every single one of us takes for granted. 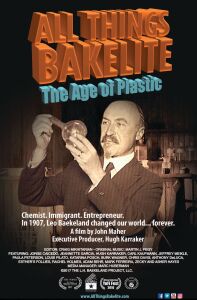 But lest you think this is a cut-and-dry science doc, let me assure you that it is not. As informative as it is, All Things Bakelite has a lot of charm to it, and includes many surprise elements. There are wonderful old home movies, journal entries, very brief recreations to help us understand the origins of the entire story, beautiful archived images, and even performances of original music! (And, for my fellow obsessed recyclers out there, there’s even a section about the downside of plastic these days, which I appreciate, even though, in my opinion, its upside is greater. One of the experts in the film, retired research chemist Burt Wagner, wisely acknowledges, “Plastics is both the finest and the worst expression of humankind.”)

Mr. X saw the film with me, and even he was impressed with the panoply, and many of you know how rare that is! He was especially in awe of how much “the visuals popped.”

Being an antiques lover, I’ve always been aware of retro Bakelite products, mostly jewelry and kitchenware, because of their value as collectibles. But that’s where my knowledge ended. I had absolutely no idea that Belgian chemist Leo Baekeland had invented the product that is basically what all plastics of today are based on. It boggles the mind. How did someone even think to do that in the first place, let alone figure-out the how??? 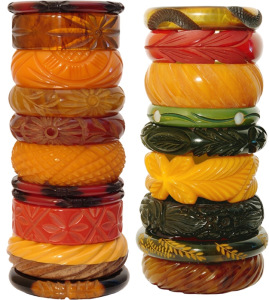 Of course, I can never explain the entire tale as perfectly (or even close to it,) as the two men behind this revealing documentary, Executive Producer Hugh Karraker, who is the great-grandson of Leo Baekeland, and John Maher, who is both the Director and Director of Photography of All Things Bakelite.

Being curious about what inspired them to make this film, I tracked them down for a little tete-a-tete. A-tete! (There were two of them and one of me; hence, a trio of tetes!!!) So now you all get to be privy to some of that conversation, as well.

Hugh Karraker, a long-time New York actor, and prolific film director John Maher, both Connecticut residents, met when Hugh and his wife danced the Lindy Hop in a previous film of John’s. (Now I’m going to watch that one, too!) Since All Things Bakelite is about Hugh’s ancestor, the germ of the idea came from him. And then John, a lifelong cinematographer, (whose first job out of high school was shooting Yankees games—how did I not know him back then?,) took the ball and ran with it.

The duo did research for about a year, and then took twice as long to bring the whole concept to the screen. John told me, “We took our time. I think of filmmaking as kind-of like rock-climbing in that you get yourself up a little higher with each piece of information or each interview, and when you get your eye up a little higher, you see a little further down the line, and that leads you to the next interview or the next question.” 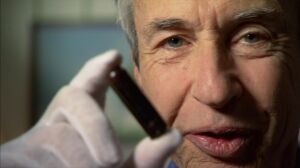 And Hugh explained that they had a “connection with the Union Carbide people in New Jersey.” That’s the company Bakelite was sold to back in the day, and I’m sure their assistance with the project was appreciated.

I wanted to make sure I understood the history of Bakelite correctly, (because my academia-oriented self is still always concerned there will be a pop quiz right around the corner,) so I asked John to tell me exactly what part of the plastics world Bakelite occupies. He answered, “I think it’s considered the first real, genuine, wholly synthetic plastic. It’s really the thing that got the ball rolling on all these other plastics that exploded out into the world, particularly around World War II, and after.” Impressive.

Leo Baekeland invented Bakelite in 1909, but, as John explained it, it didn’t become really famous in the non-scientific world, “until Andy Warhol started to collect it in the ’60s or ’70s. He was one of the first collectors of it, and he suddenly made it hip.”

Hugh even gave me a little lesson on how to authenticate Bakelite. He told me, “It has a weight to it, it’s heavy. If you rub it, it smells like formaldehyde.” (And as someone who’s not only Baekeland’s great-grandson, but has viewed over two thousand items made of the material when he visited a collector in Belgium, he should know!) 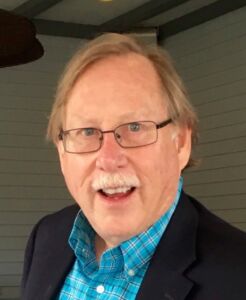 Getting back to the actual documentary on the subject, I feel that All Things Bakelite is the perfect length, with the chronology being spot-on. It also features an excellent mix of experts; they’re all different ages and nationalities, and come from various geographical areas.

Director Maher gives major kudos to everyone who worked on the film, in any and every capacity. He lauds them as a “very strong team.”

Since Mr. X and I were uber-impressed with the cinematography, I complimented John on that aspect of his work. He said, “I think it’s important that people be lit well, and that we have very strong compositions. It’s a visual medium, so I really wanted to get people to see things visually.” (Where was he when I was doing my TV show, with the worst lighting known to man???)

Hugh added that as a professional actor, having worked with lots of directors and photographers over the years, he rates John “primo,” an assessment I can agree with after seeing this documentary.

I loved that one of the speakers, IBM Research Chemist Jeanette Garcia, refers to what Leo created, as an “elegant molecule.” She makes it sound so attractive, that now I’ll have to find a way to elevate my own vocabulary by working that term into it. 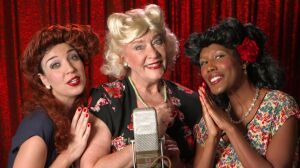 Some of the singers in All Things Bakelite.

A couple of the other experts who help us understand the magnitude of the invention of Bakelite in the film are Pratt Institute Professor of the History of Design, Dr. Katarina Posch, who declares, “Plastic is the material of dreams,” and cultural and design historian Stiles Professor in the Department of American Studies at the University of Texas at Austin, Jeffrey Meikle. (I’m wowed by their long titles alone; my lone one, as you know, is simply “Major Celebrity!”)

Messrs. Maher and Karraker and I had a funny moment, towards the end of our conversation, about one thing in the film that I really wanted to get to the bottom of. It’s such a minuscule item that I couldn’t imagine anybody else would even notice it, but I thought, “I have these gentlemen here, so why not ask them about the situation that I’m so curious about?” I thought they would think I was crazy for asking about it, but, thank goodness, they chuckled at my inquiry. And…they actually knew what I was talking about, and had an answer!

And the visual in question is this: Austrian expert Burt Wagner had a blue paper clip on his thumb for part of his sections, and you know how nutty I am about things like that, so I was wondering if it was a medical issue, a nervous habit, or something to do with actual Bakelite. To my absolute delight, John laughed and explained that Mr. Wagner had just picked it up for no particular reason, and he decided to keep it in the film. I think John and Hugh were surprised that anybody else had noticed it, and wanted to discuss it, but it gave us all a little bit of mirth over the topic. (And now you know to look for it, as well!) 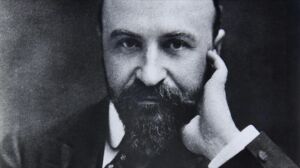 While Hugh continues to showcase and promote his great-grandfather’s incredible invention, John will be working on a film for the anniversary of 9/11, and at the same time, on a short doc based on a book about Bakelite, which that author refers to as “the material that makes metal ashamed of itself.”

On that note, all that’s left for me to do is thank Leo Baekeland, because I cannot even begin to imagine a world without plastic! And thanks also to John Maher and Hugh Karraker for making us aware of this extreme contribution to society.

All Things Bakelite rolls out worldwide tomorrow, June 29, 2021, on iTunes, Apple TV, Google Play, YouTube, and VUDU. (It’s also available for private screenings, so it would be perfect for educational purposes, or just gatherings of intelligent people!)

For more information, and to find-out how you can watch All Things Bakelite for yourselves, just go to www.allthingsbakelite.com.