Trending
You are at:Home»Uncategorized»MOVIE REVIEW: ALBERT NOBBS
By Karen Salkin on December 15, 2011 · Uncategorized

Albert Nobbs is weird and slow. But Glenn Close may just deserve an Oscar nod for her performance.

This film is like something from the mind of Ryan Murphy. For those of you not in the know, he’s the creator-producer of Glee, who’s turned so many of the regulars into gay characters, thus making everyone, actors and viewers alike, uncomfortable at all times!

It’s interesting, but kind-of stupid. SPOILER ALERT, although I don’t think I’m ruining anything to tell you guys that I just can’t believe that there could be more than one woman living as a man in the olden days, in the same little area of Ireland at that same time. It’s just weird. 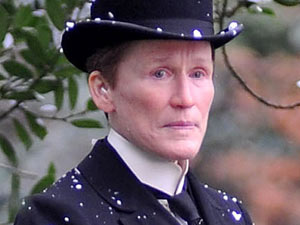 During the whole first part, I was wondering if we’re not supposed to notice that Albert is really a woman! It was kind-of obvious to me, except for the fact that I always thought that Glenn Close was indeed a man disguised as a woman!!! I swear, when I first saw her in The World According To Garp when was a kid, I was a little freaked-out! I thought she was an old man at the time! (I’m sure she’s a lovely person, but I’m just saying what you all are thinking.) 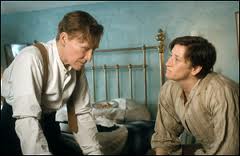 Make-up your own caption here--I throw my hands up on this one.

But when Janet McTeer, (who’s an excellent actress, so this is no slam on her thespian abilities,) came on, it was almost laughable to me. She looked like the daughter of Jane Lynch and K.D. Lang, for Pete’s sake! Or, in this case, the son of them. At least this film didn’t go the Yentl route and have the stars wear full-on chick make-up, as Barbra Streisand did in that film, when disguised as a boy. That was just downright strange as the director’s choice, which Babs also was. Talk about vanity!!!

The journey was just bizarre, and the ending didn’t make much sense to me—is it really realistic to think that, even in those hard times, a pretty girl’s only two choices in life are lesbians (or perhaps not) disguised as men? I just don’t get it. But how quickly would these characters be booked for Dancing With The Stars if it was on back then?! (They didn’t even have TVs back then, so no worries there.)

I must say that in talking it over with Lucia, and then giving it some thought afterwards myself, as I do with most films, whether I want to or not, it did become a little more clear to me. But during the screening, I was mostly just confused. I didn’t know who was supposed to be a lesbian or who was supposed to know what or what the purpose of the whole charade was to begin with. Maybe I should have seen it with Chaz Bono instead of Lucia!

To help with my understanding of the film’s message, I was never so glad to hear a post-screening Q-and-A; as one of the film’s writers, Glenn Close explained a lot of it. As much trouble as I had with understanding it now, I could have never gotten any of it when I was younger. I’m not good with sparse dialog and actors’ stares.

Ms. Close was also lauding the wigs they wore. Who needs wigs to portray women disguised as men??? Just cut your hair, for goodness sakes! Sometimes I just don’t get show biz. Now I have to go think the whole bloody thing all over again.