A WRINKLE IN TIME REVIEW

This is one of the dumbest, most waste-of-time movies I’ve ever seen!!!  On every level! I make many of the points against it in my new YouTube video, which you can watch here: www.youtube.com/watch?v=Hkbdlh4_0s8. (But then I suggest you also read this written review because they’re basically companion pieces.)

Okay, okay, A Wrinkle in Time does have excellent special effects, and also sound, if you see it in the right theatre.  (I recommend El Capitan to people in Southern California.)  But that is it!  The story is beyond stupid and the performances of the three famous women in it are just dreadful. 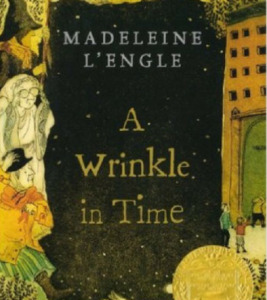 So, let’s go in as close to an order as I can, beginning with the awful (yes, I’m the only one brave enough to say it) book from 1962.  Thank goodness no teacher ever made me read it when I was little because I would have been even more confused about life than I already am.  But, when my little best friend, Ronnie Hazel, Jr. stayed with Mr. X and me about a decade ago when he was a tween, he had to read it for school.  So, of course, I was here for him, as always with his schoolwork.  (I even had Flat Stanley as a guest on my TV show back then!)  But when he asked me questions about “tesseract,” he lost me.

And I was just as confused seeing this film version of A Wrinkle in Time as I was back then!  I didn’t think anything could be worse than the book, but I have to hand it to Disney—they accomplished that dubious feat with this beyond-inane movie.

Before I get off the topic of the inordinately stupid story, here’s my theory on it, now that I’ve done a lot of research on the topic.  The author, Madeleine L’Engle, (who’s now deceased,) has admitted that all she wanted to do was write a successful science fiction book.  This one was turned down by dozens of agents and publishers, and it should have stayed that way, if you ask me, (which you are by reading this review!)  When I noticed what year it was written, this hit me—I feel like she was trying to sort-of copy Robert Heinlein’s seminal 1961 novel, Stranger in a Strange Land, on some levels.

I do admire director Ava Duverney, (and she’s a fellow UCLA girl, a school that has been so influential in my own life, as well,) but this work just does not live up to her past triumphs.  I have a feeling that someone else was pulling her strings on this one.  (*Cough*Oprah*cough*.)  It’s shocking to me that the director who brought us the serious, informative, worthwhile documentary 13th then moved down to this garbage! 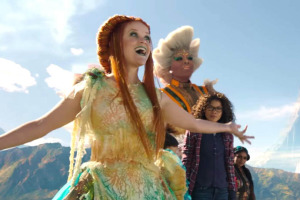 I tried to find pix that showed how much bigger Oprah Winfrey’s character is than the rest of the characters, but this was the closest I could come to it. I guess she didn’t want to keep reading that her image on screen is as gigantic as her ego!!!

Before I discuss my many complaints with A Wrinkle in Time, let me tell you that Facebook peeps are practically writing this review for me!!!  Here are just a tiny smattering of the negative mini-reviews I’ve been seeing on there:  Someone wrote, “Have never read the book.  Saw the movie this weekend.  Underwhelmed would be an understatement.  Oprah looked like a demented drag queen–RuPaul gone to pot.”  Another wrote, “Hopefully this will mean she won’t run for president.”  And yet another said of Oprah,  “After I saw her scenes, I almost gagged.  That was pure ego on her part: there is no way a figure that well known as a (supposedly) ‘real’ person would not ruin every scene she was in.  She looked ridiculous and broke any suspension of disbelief that an audience might have been able to generate.  From what I saw of it, the cinematography (for all the money spent) looked rather sub-par, very TV special.”  And all that was on just one thread!!!

I agree with all of that, and have to add to it.  For decades now, Oprah Winfrey has employed a fake English accent, ala Madonna, which is super-annoying.  It may have actually worked in this film since she’s supposed to be a character, rather than herself.  But she was never not herself in it.  And I have a sneaking suspicion that she had it put into her contract that she would be the physically biggest person in it, which made everything about her even more unbelievable.

And how many nose jobs has Oprah had?!  Maybe she should’ve also had a moustache-ectomy while she was at it.  Those hairs really show up on the big screen.

And while we’re on it, the other two “witches,” (or whatever the heck they were supposed to be,) were terribly miscast, as well.  I usually like Reese Witherspoon, but she was also too much herself in this one.  No one wants to see a valley girl as an ethereal being.  It just doesn’t work; she seems like she was doing a Saturday Night Live skit the entire time.  And I’ve never been a fan of Mindy Kaling, so this was just another sub-par performance on her part.  I don’t understand her ever getting acting jobs.  At least in this one, all she had to do was spew quotes from other people.

These three “spirits” should have been played by much better, lesser-known actresses; then maybe the whole shebang would have been more effective.  But when all you see in a story that demands you suspend belief is three famous women being themselves, it makes it that much worse. 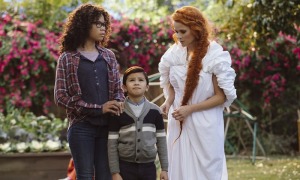 The sister, the brother, and whatever the heck Reese Witherspoon is.

Then there are all the other holes in it. There are too many to go into in this space, so I explain the rest in the video portion of this review. (Remember, you can see it here: www.youtube.com/watch?v=Hkbdlh4_0s8.)

But one really annoying aspect of this film version of A Wrinkle in Time is that they made the kids bi-racial. (I think that’s what was going on, anyway; I still don’t understand where the little boy came from because he was just there all of a sudden!) Why does everybody have to be bi-racial nowadays? Enough already! I was probably the earliest person I knew who had a boyfriend who’s black, and if I wanted kids, I would have loved to have a gorgeous bi-racial child myself. But more than that, I would have loved for our relationship to be universally accepted, which it definitely was not, even in liberal Los Angeles. So I’m thrilled that it’s that way for most mixed couples these days. I just feel that not every entertainment has to portray that!!! Even though the book of this story did not specify ethnicity, it was written in 1962, for goodness sake, so you know that the family was meant to be all white! How weird, and possibly offensive, would it be to do a movie of A Raisin in the Sun with the main characters being portrayed as Asian and white??? I’m just saying.

Another thing I didn’t like is that the film just starts all of a sudden, out of nowhere. I literally thought the beginning was some kind of ad. Like maybe for NASA because I saw that logo in there. I wanted to rewind and start it again, like with a DVR. A major film like this could have used some cool upfront credits! 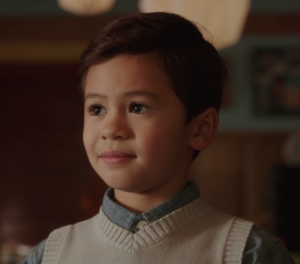 The little kid in the movie who looks just like Ronnie Hazel, Jr. did back in the day!

And then there’s the derivative of Lost aspect to it. Just about every “supernatural” scene and effect looked like it was plucked right out of that TV show! That being said, the fabulous visual effects and excellent sound are the only reasons to see this film, so at least those are good.

Speaking of good, the little kid is probably the best one in the film. And it doesn’t hurt that he looks just like Ronnie Hazel, Jr. at that age. To bring this review full-circle, Ronnie’s my pal with whom I first discovered this book to begin with, when he was eleven. So, seeing his doppelgänger in it was sort-of surreal to me. And I liked it. (But too bad the kid is King Obo in real life! He made an appearance before the opening night screening, and could not have been more obnoxious if he tried! So that sort-of ruined his performance for me. But I do have to acknowledge that he’s a natural little actor.) And Levi Miller, the guy who plays the sister’s teen-age suitor, is good, as well. And adorable. So there’s that. 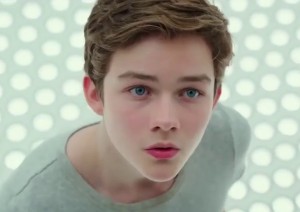 But still not reason enough to waste time and money on this one. Just wait till it comes on TV, (which should be soon, if everyone feels as I do,) and use it to fall asleep to.

Before you do that, though, please make sure to watch my whole video review of A Wrinkle in Time because I say things that are more fun received verbally than written. Here’s that link again, just in case you missed it the previous two times! It’s like my own little wrinkle in time!: www.youtube.com/watch?v=Hkbdlh4_0s8.