I have a friend who practically begged me to take her to a screening of A Single Man. She, like I, never reads reviews or descriptions of a film beforehand, and we both assumed by the title that it was a comedy about a singles guy’s dating life. Didn’t you all think that, too? As soon as it began, however, we knew it was serious and depressing, but never did we realize that it was about a gay older man who had recently lost his lover of sixteen years. Not that it matters–it’s just strange what certain titles erroneously evoke. 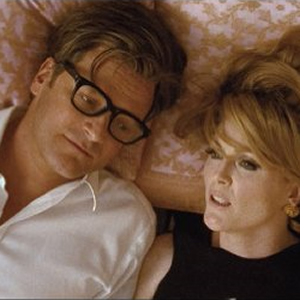 Firstly, I must say that Colin Firth as the “single man” was absolutely brilliant! In a fair world, he’d win every award. But I fear that this is shaping-up to be the year of Jeff Bridges, who was excellent in Crazy Heart, but whose performance isn’t quite as good as that of Mr. Firth. I swear, I had to go home and research him because I was thinking that I hadn’t realized before that he was gay! He’s not, but that’s how believable he was. By just being. It was truly remarkable.

I’ve often wondered what makes a man visibly homosexual, without us being told. Usually, it’s some outright stereotypical things. But, in this case, none of those were there. He plays a college professor in 1962, when I’m assuming that most men weren’t “out.” So he was totally low-key about it. But, even in the stillness, you would know this man is gay, even if you knew nothing of the film. Amazing.

As I was watching the drama unfold, I was aware that the film was a tad slow, especially for one who was expecting a Swingers type of story. But it has really stayed with me and I find myself reflecting on it often and still feeling the professor’s pain. I can’t even begin to imagine a time when a same-sex couple could be together for almost two decades and have to keep it to just themselves and their few close friends. I think that must have been horrific. I marvel at just how far the world has come.

I’m also pretty impressed with Tom Ford’s direction, especially being that this is his first film. We should all have such successful debuts in new careers. While much of the slow pace is due to the fact that the story takes place in one single day, the flashbacks definitely help. I usually hate that device and want stories to be told in a linear fashion, but this time they made the film more interesting–kind-of like a mystery.

It was like we, the audience, were becoming his confidants and getting to peel back the layers of his life a little at a time.

So, we have a slow-ish, sad-ish film with several beautiful men, (especially Nicholas Hoult, who I can’t believe was the pudgy, funny-looking kid star of Hugh Gant’s About A Boy just eight short years ago!,) the aforementioned brilliant performance of Colin Firth, and the very yellow teeth of Julianne Moore (I know people didn’t whiten their teeth back then, and she was playing an Englishwoman, but puh-lease!.)

In addition to all that, I really enjoyed seeing all the old school appointments; especially interesting were the automobiles, phones, and…pencil sharpeners! I had forgotten all about those, except for one for eyeliner.

So, I highly recommend A Single Man to everyone. Just make sure to get some good shuteye before you go, so the slow pace doesn’t lull you to sleep. It’s worth staying awake for.