I believe that A Better Life has come and gone in the general public, (a pal who was with me at an art opening for caricatures of the nominees looked at the one of Damian Bichir, the Best Actor Oscar-nominated star of this film, and asked who he was and when this was out!,) but I think everyone, especially the pampered people of Los Angeles, should see it, somehow. Nothing really terrible happens, like a death, but it’s uncomfortable all the way through. I try to be nice to everybody in life, but when our twice-a-year gardener rang the bell the morning after I saw this movie, I was extra warm. I had to hold myself back from grilling him about his family. (You’ll understand that when you see the film.) 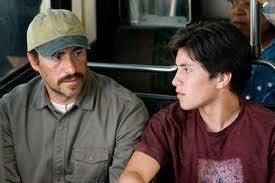 It’s about a gardener from Mexico, (where else?,) trying to raise his teen-aged son and keep their heads above water. It was frightening in it’s realness. How often do we drive-by undocumented workers, standing on a corner, hoping someone will hire them? And how unoften do we even notice them???

The star, Demian Bichir, is great in his simplicity. It’s almost a documentary! [Note: not as much so as Dexter Gordon’s absolutely brilliant performance in Round Midnight. I was young enough when I saw that one that I thought it actually was a documentary!]

This is such a simple and true-ringing story that it has stayed with me for weeks. Of course, I’ve been labeled an Empath, but I think it will affect normal people the same way.

I must say that when Mr. X and I moved into our house many years ago, I hired a young housekeeper whose first job this was. (First time for me, as well; I had been brought up by Edna, who was my best friend until the day she died, but I never had someone work for me.) I not only made Vilma lunch when she worked, and taught her English, but I employed her husband, procured all her other jobs for her, let her bring her sisters and disabled son to work, and gave her big family every piece of clothing I wasn’t using. When I found-out that a chiropractor was giving them false hope that her son would walk again, I got the child free x-rays, brought them around to my orthopedic surgeons, and got him a free operation in Santa Monica Hospital!!! I visited with balloons and toys for him, and pastries for the family. (And then she left me for a horrible woman I had gotten her a job with! But that’s another story for another time.)

The point is, I don’t really expect anyone else to go out of their way in that manner for their employees, but I hope A Better Life at least opens people’s eyes to what the workers we middle class take for granted go through on a daily basis. And maybe we’ll all be a little more sensitive to the plight of others after seeing it. At least, that’s my hope.