[Note: In this week’s run-up to the Oscars, I planned to dedicate all five days to movie reviews.  But then I realized that, since I had the privilege to serve on the Screen Actors Guild Nominating Committee this year, and therefore finished seeing all the important films ages ago, (most even prior to their releases,) I’m so done with the topic.  I’ve already reviewed many of them earlier this season, so if you missed them, just check-out my archives to the left of the front page. They’re all in the Movie Reviews section. Duh!  But I will review a couple of more this week, to add to the mix.  And please be aware that unlike most other movie critics, I’m not here to give you my “Intro To Film” analysis; I’m just letting you know how good or bad I think a film is.] 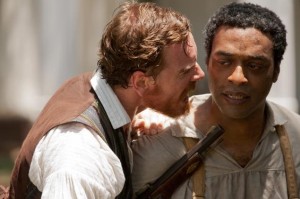 Michael Fassbender and Chiwetel Ejiofor, as bad guy and good guy. Guess which is which?

As good as this film is, it’s a hard one to watch, especially on a big screen. I barely slept for a couple of weeks after I saw it.

In case you don’t already know, 12 Years a Slave is the true story of a guy who was, guess what?, a slave! For a dozen years! Duh! And since he’s the one who wrote the book that the movie is based on, you know that it has a happy ending, which was the only reason I was brave enough to see it.

It’s an important story, so I suggest you see it, and just bear down to get through it. We as a society seem to often forget the horrors that black people, Jews, and other ethnic groups have gone through. (And many, unfortunately, still go though.) As horrible as it is to witness on film, I feel we all should be reminded of struggle occasionally.

If you haven’t yet seen it, I suggest you do, at some point. It might be easier to view at home, rather than at a theatre where you can’t cry out in pain, or grab onto a pillow, during many of the scenes.

I’m so grateful that the sojourn had a happy conclusion for the man who lived through it, Solomon Northup, but just remember that it didn’t turn-out that way for most slaves. And be grateful for your own lives when the screen goes dark.