Trending
You are at:Home»Uncategorized»MISCELLANEOUS: WORD CUBE, I HATE YOU
By Karen Salkin on October 7, 2011 · Uncategorized

WORD CUBE, I HATE YOU

I have had many love/hate relationships over the years, including with Mr. X! But I’ve never had one as badly as the one with the Word Cube game! I love it. But I hate it. In all honesty, I’m addicted. (Mr. X pointed out that he knew I was addicted when I started taking multiple pictures of my highest scores, which, I’m proud to say, top out at 66,900 as of this writing!) [Note: in case you’re re-reading this column, which I would really appreciate, by the way, I don’t want you to think you’re going nuts; I do keep changing the totals to reflect my new highest score.]

Until a few years ago, when her eyesight fell victim to macular degeneration, my mother did crosswords constantly, and my friends are always amazed how sharp she is, which I really do feel is, in at least part, due to constantly challenging her mind. 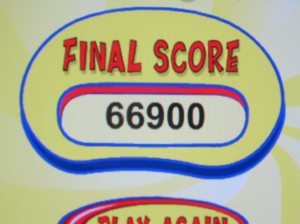 I, too, love crosswords; the harder the better. But, with my crazy, busy life, and running this E-zine, I never have time to just sit somewhere quiet and do puzzles anymore. And Solitaire just doesn’t cut it for mental stimulation. (Nor do most of the TV shows I watch, which I’ll be reviewing next week.)

Solitaire you can stop and come back to anytime, even days later. But Word Cube is different; you have to Jack Bauer it. I always feel like I’m going to vomit. My heart stops, and I can’t focus on anything else. It’s really perfect for when my brain gets too scattered.

Also, crosswords are satisfying only on real paper with a pen. (Yes, I do do them in pen. Jealous???) But nowadays, between iPads, laptops, desktop computers, and intelligent phones, (that so far I’m shunning,) sadly, who has time to find a pen and paper?

It all started in United Airlines’ Business Class. I was on my way to New York in July because my mother had been rushed to the hospital. I was a wreck, had been up overnight to fly stand-by, and couldn’t stop crying. Even though I love watching movies on the personal entertainment centers the airline provides, I knew I didn’t have the concentration to do so.

But, I didn’t want to keep thinking about what awaited me in Brooklyn, because I’d scare my seat-mate with my hysterics. So, to occupy my myself until I’d fall asleep, I figured a mindless game would do the job. Boy, was I wrong! I chose Word Cube and the rest is history. I played it for most of the five hour flight!

Thank goodness you can’t get it on the iPad or who knows what would have become of me in the two months I spent on the east coast, but on the plane back to Los Angeles, I picked-up right where I left off. And I’ve been making myself sick playing it on every electronic device at home for the past three weeks. (Maybe it’s time to switch airlines? And actually, not just because of the game, but I’ll tell you that debacle some other time. I have to hurry and finish this column so I can get back to my game.)

So, lest you read this and think, for some reason, that Word Cube sounds fun, here’s a little story that Mr. X once told me: For a period of a few weeks when he was a teen-ager, he and his pals couldn’t stop playing Chinese checkers. They then started having a strange reaction to the non-stop gaming.  No matter where they were–at the movies, in traffic, in restaurants–they all were making mental jumps over people’s heads, a la the board game! They couldn’t stop. 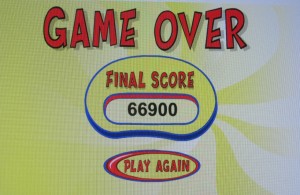 I told you I take multiple pictures of my scores!!!

He predicted this would happen to me with Word Cube, and he was, unfortunately, correct. I can’t stop spelling words; in my sleep, when I hear people talk, even at parties. I constantly visualize a word cube. It’s driving me nuts.

So, there you have it—the reason I didn’t post every day this week. I sit down at the computer to write, and wind-up playing Word Cube. If I start writing columns in only three- or four-letter words, you’ll know why.

So, if ever I miss a day here, please don’t worry about me, as some of you kindly do, which I really appreciate, by the way. Just assume I lost a day to mind-strengthening. And really, if I have to have an addiction, isn’t this a healthy one to have?