Trending
You are at:Home»DINING»MISCELLANEOUS: WHERE IN THE WORLD IS KAREN SALKIN?
By Karen Salkin on July 12, 2013 · DINING

WHERE IN THE WORLD IS KAREN SALKIN?

You’re not going to believe this, but…I’m in New York again!!!

Mr. X and company are holding down the fort at home in Los Angeles, while my usual posse, (and some special guest stars,) will be hard at work on my house in Brooklyn. Thank goodness I have a few good pals! When Bette Midler sang, “Oh, you gotta have frie-ends…,” she knew what she was talking about! Trust me on this!!! (It still kills me, and them, that my two best New York friends both moved to Colorado just in the past couple of years. Boy, do I need them now!) 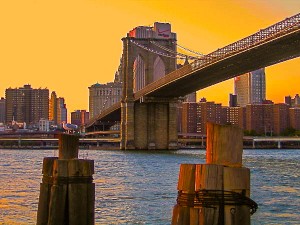 Sun setting over the Brooklyn Bridge. How apropos for me this trip! Photo by Anna Kader.

I expect to be broken-hearted when I return to L.A., (over leaving my house in New York for the last time,) but until then, I want to appreciate my very first home up until the very last minute. (How many people over the age of twenty-five even still have their childhood homes??? With tons of their fabulous possessions in it, to boot! Well, fabulous to them! My fifth grade math homework, anyone?)

As usual, I’m mainly just working on the old homestead, but also as usual, all work and no play makes Karen a dull girl. So I’ll be reporting on some fun events in New York, including new restaurant reviews, the Hamptons, a play here and there, and, fingers crossed, happenings around the All-Star game in Citi Field!

Sadly, from so much typing for this e-zine, (and doing it all with my hands in what Mr. X calls a “ballerina position,”) I’ve developed serious carpal syndrome, so I’m not supposed to be doing a lot of typing in the near future.  So, for the next month or so, I’m aiming to publish only every other day, rather than week-daily.  But we’ll see; I usually break down and do whatever is for the greater good.

So, please hang in there with me.  This is my last planned trip to New York, which is so sad, but it means that, as soon as I get back to LA, I’ll be back working hard on INAM every second. I also have an exciting new writing gig, but I’ll tell you about it in the next week or so.

Until then, if you need an INAM fix more often, please just follow me on twitter. @KarenSalkin. (It’s less to type there!)