Trending
You are at:Home»KAREN'S MUSINGS»KAREN’S MUSINGS: THE MERITS OF SOLITAIRE (NO JOKE)
By Karen Salkin on June 3, 2014 · KAREN'S MUSINGS

THE MERITS OF SOLITAIRE (NO JOKE)

I’m not defending the playing of Solitaire; for the most part, it’s a complete and utter waste of time. And it can even promote self-loathing. I often actually hate myself while I’m playing because of the time I’m wasting, and I spend the whole time silently reprimanding myself. 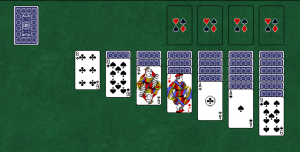 But, on the other and, Solitaire-playing does have its good points. Here are some of them that I just realized the other day, (while I was engaging in it, of course!):

~ It’s a good way to ease into the day. (For those of you who have the time to stay in bed for awhile, of course, not for people who have to be up at the crack of dawn for work.) I used to have to force myself to get up and going in the morning. But now I play a few games in bed, on my iPad, and it gets me up and at ‘em, with no jolts.

~ Playing such a mindless game is way better than counting sheep for getting to sleep; the counting method can often lead to thinking of things better left for waking hours. Or never. But the repetitive moves when one is already tired is an instant sleep-inducer.

~ I’ve found that playing this game is actually a good stress reliever! This is one outcome that doesn’t matter in life, so no one cares if they lose a game, which, of course, we all do. Repeatedly. I find that playing a stupid, unimportant game makes my mind calm down from all I’m going through the rest of the day.

~ Along those lines, I’ve noticed that playing a mindless game helps me process problems without dwelling on them. And that’s a Godsend nowadays!

~ If you do it on a computer, (rather than with actual cards,) getting to try each hand over again can also lead to learning different ways to solve problems.

~ And deal with disappointments.

~ And to have some patience.

~ And to work quickly, if necessary.

~ And learn to let go and not obsess over every little thing, which I’m wont to do.

~ On a deeper level, I’ve often noticed that I feel better when there’s a blend of black and red suits, rather than just one color, sort-of like in life.

~ Playing Solitaire also gives me somewhat of a concept of what I can accomplish in how long a period of time.

I’m not rationalizing this for Mr. X’s sake, even though I’m sure that’s what he thinks I’m doing. I can always feel his disdain when he sees me playing on the iPad in bed most mornings. But after he reads this, maybe he’ll feel a little better about my Solitaire semi-addiction recently. And maybe you guys will about yours! At least, I hope so.