STATES I’VE BEEN TO

This list was inspired by watching the second round of Elite Eights in the NCAA March Madness college basketball tournament.  I was just realizing that I’ve been viewing these kids from the prism of my own life, as traveled as it is.  And then I realized that many of them come from small towns, with no prospects outside of sports.  What a world their basketball skills have afforded them!

So, I started to think of exactly where I’ve traveled in North America, and to what I owe the pleasure.  (Or pain.)  Much of the east coast is due to my parents, the middle of the country due to my own young road trips, and several specialized spots due to my career, (or that of Mr. X.) 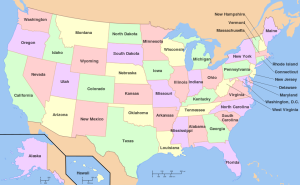 I just counted them up, (outside of when I count things like that to fall asleep,) and I was pleasantly surprised to find that I’ve been in thirty-three states!!!  Some I just passed through, but most

I’ve spent at least a day in. (It may actually be more because I can’t remember exactly what route one of my teen-age cross-country trips took.)

Anyway, here’s the mostly non-detailed list, with just a few comments along the way:

Arizona—When I played in a celebrity bowling tournament here, (don’t ask,) I had the best afternoon tea at the Phoenician Hotel!

Colorado—I spent at least a dozen summers in Aspen, where most of my favorite pals lived. (Only one is left there now.)

Connecticut—My first favorite state away from home. It’s where I first honed all my flirting skills…when I was two!

Florida—Ugh. To all trips there. Let’s just say that it makes my hair look like Monica’s in Barbados!

Hawaii—Love Oahu! Mr. X did a TV show here, and I was lucky enough to tag along.

Maryland—I did the worst morning TV show ever here! They made food with the wrong ingredients on purpose to try to get me to spit it out on-air!!! Good segment producer, eh? And for that, they flew me there and put me up in a nice hotel!

New Mexico—Mr. X went to school in Santa Fe, and when he first took me there for an event, I hated it. But, by our third visit to Ten Thousand Waves, (where you spend time in a private hot tub followed by a massage,) I was hooked!

Oregon–I played in a celebrity golf tournament in Dallas, Oregon, and the assemblage there taught me that the state is really pronounced “Organ.”

Pennsylvania–I love this state!!!  I spent so many summers in Bucks County when I was growing up, and I can still feel the summer air at the theatres I loved so much there.

Rhode Island–The only state that still has my heart, outside of my native New York, and my adopted-as-a-teen-ager California.  Outside of Mr. X, the only other family I consider myself to still be somewhat a part of, the Hazels, live here.

Texas–I have vivid memories of driving through this state with a female pal-at-the-time and two guys we just met, in a car with Saran Wrap as my window!  Good times.

As pleased as I was to find that I’ve been to most of the United States, I was a bit bummed to discover that I’ve visited just a handful of other countries. They are, in order of my time there: Mexico, Canada, Italy, Malta, and England. Good enough, but I hope to do more, now that my obligations in New York are finally over! Fingers crossed, anyhow.