Trending
You are at:Home»Uncategorized»MISCELLANEOUS: NEWTOWN TRAGEDY
By Karen Salkin on December 17, 2012 · Uncategorized

I’m writing this while in the deep throes of the flu, so it may not be my best writing. But I feel the need to acknowledge what happened this past Friday in Newtown, Connecticut.

I have no flowery words to make anyone feel better, nor ones of more outrage than has already been expressed by everyone else in the world. Adding my two cents is far from necessary. But I couldn’t get back to mainly frivolous writings if I didn’t weigh-in. (I had posted a hair salon review on Friday before I knew about the elementary school shootings, and cringed all day at the thought of that frivolity in the light of the shocking sadness.) 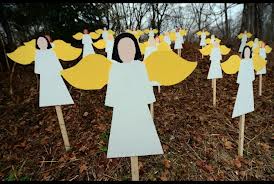 There’s no normal person in the world who is not affected by this tragedy. All murders are horrible, and all mass murders that much more so. But, when it involves the killing of innocent children, it’s so much more horrific. And losing so many brave adults who perished trying to save their young charges is unfathomable. Would the rest of us be so brave? I pray we never have to find-out.

When the President of the United States, known for his stoic demeanor, tears up in front of the world, even the hardest of hearts has to break a little more.

The moment I read the news of the Sandy Hook Elementary School shootings, my first thought wasn’t of the Columbine or Virginia Tech shootings; it was of the movie We Need To Talk About Kevin. In it, troubled teen-ager Kevin kills many people in his school, and we see flashbacks to his whole life, and his mother’s aloneness in what she witnesses of his behavior through the years. When I saw it, though it was a work of fiction, I kept wondering why there was no one who could have helped the boy before this happened.

And now, here, on Friday, in a quiet little New England neighborhood, was the very same situation. In real life. Not something we can even try to forget, as a movie scenario. And we should not forget, so that we as a people can keep fighting for change.

My second thought was of a real-life situation that most of you probably don’t know about. In 1996, in Scotland, at the elementary school where tennis champion Andy Murray was a student, a similar horror occurred. Andy has never spoken publicly about it, (but members of his fmaily have.) Maybe he will now, to discuss the measures that his government then took to ensure no other similar incidents will ever occur.

There’s not much more to say on the subject, except to add my name to the list of people who are again calling for not only gun control, but for mental health help. While none of us can predict who will commit such violent acts, mental health professionals can possibly help avoid them. It’s at least worth a try. And, at the very least, will provide assistant to those who most need it, which is a worthwhile endeavor unto itself.

I pray that these families can someday find at least a modicum of peace.