I thought I’d give you guys a little taste of what my non-stop activities are like by combining the reviews of three events that I attended in the space of twenty-four hours two week-ends ago. I hope you don’t get as exhausted reading about them as I did living them!

This was a really special three-part evening, held at the downtown Grammy Museum, a venue that added to the panache of the event. It was billed as “Levitt Pavilions presents An Evening With Grammy Legends Jimmy Webb and Thelma Houston,” but it was so much more than that.

I had never heard of Levitt Pavilions before, but throughout the evening I was apprised of the fabulous work their nonprofit organization does, bringing music and entertainment to the masses. It’s the only national network of outdoor performance venues with free programming, and each pavilion presents at least fifty concerts a year. Pretty momentous.

We in Los Angeles are lucky to have two locations right here, one in Pasadena and the newest one, in MacArthur Park, which is downtown. I truly love organizations like this, who care about entertaining the people who may possibly not be able to afford to go to concerts otherwise. I really encourage you to go to their website and learn more because even the pre-concert speeches were interesting. There’s a lot to learn about Levitt Pavilions. 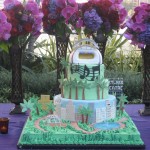 The cake depicting the MacArthur Park Levitt Pavilion: obviously, no one "left the cake out in the rain" this time!

Anyway, back to the fete! It was interesting to see that all the guests dressed-up, which made the whole event feel really festive. First up was a lovely cocktail reception on the roof. Next, we headed into the museum to look around for a few minutes before being admitted to the Clive Davis Theater, which was the perfect size for an intimate evening of music. I sat near the back and didn’t even crave my usual binoculars, (which I use to study every muscle movement and maybe even a wardrobe malfunction, like a goon.)

I had heard of Jimmy Webb, and could tell you that he wrote the iconic MacArthur Park, but that’s about it. Turns out, he wrote so many famous songs, I can’t even begin to list them! But much more than that, he was a charming, honest, amusing story-teller, to go along with his “and then I wrote” set, which was truly impressive. (Note: Mr. Webb never once said, “And then I wrote…”; rather, it’s how Mr. X and I admiringly describe presentations where songwriters have many credits to their names.) 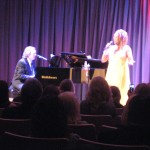 Jimmy Webb and Thelma Houston. I took this picture from my seat near the back--that's how wonderfully intimate this space is!

As he went along, I kept thinking that he should have been a recording artist himself. He has a Leon Russell kind-of voice (at least I think that’s who I was thinking of while listening to him) and it went great with his songs. He did a perfect-length set himself, and then brought on Thelma Houston, (who doesn’t have a wrinkle, despite being in the biz for over three decades.)

As it told us in the informative program, Ms. Houston has the distinction of being the first solo female artist at Motown to win a Grammy for Best R&B Female Vocal Performance. Kudos to her. She sang her big disco hit, Don’t Leave Me This Way, to a track, and then Mr. Webb got back to his piano to back her up for the rest of her numbers, many of which he had produced. Most heart-warming to see was the gusto in his accompaniment. His love and admiration for her was super-apparent, and lovely to observe.

They finished the performance portion of the evening by dueting on MacArthur Park, his famous song that was inspired by the Los Angeles park where the new Levitt Pavilion is located. Back when he composed it, it was a haven for druggies and the like, and his story of what each lyric means made me appreciate the song for the first time in my life. I actually almost shed a tear.

Nothing could beat the show, not even dessert, but it was fun to gather on the roof and adjoining lounge once again for some sweet treats. And every guest was invited to meet the stars. I, strangely for me, opted not to, because I was happy to leave with the memory of their show.

Total Woman Gym & Day Spa in Brea celebrated their one-year anniversary with a lovely event that included tours of the beautiful gym and spa, food from local restaurants, (our faves were Entourage’s appetizers and Rubio’s’ salad,) activities for children, and little samplings of some of their services. It was actually interesting to take a day trip down there as Brea is an Orange County city I had never been to before. 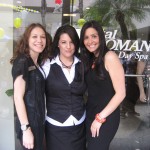 I love that it’s a women-only gym. I hate having to look cute to sweat! Now, with the one-year membership that they gifted to all their celebrity guests, I can’t wait to work-out looking my worst! I know why they gave it to me, too–they must have seen how out of shape I am, after four months of sitting around nursing my back. (Note: I still can’t work out for a few more months, so don’t judge the gym if you see me around town before October.)

The company has nine locations (Laguna Hills, Brea, Irvine, Placentia, Glendale, Westlake Village, Woodland Hills, Northridge and Encinitas,) but unfortunately, none are very close to me, so I hope that by the time I start using my membership, the secret one that I know is coming this year, that’s close to my ’hood, will be open. I’ll definitely keep you posted on the location…and my progress!

In the meantime, I want to thank Sara and Linda for the hand treatments my guest and I had the pleasure of relaxing with, and Tiffany, Kim, Royce, and Annette for showing us around and spending time with us. I feel that personnel is the most important aspect of a gym and spa, being that it’s such an intimate experience, and the ladies at Total Woman Gym could not have been kinder. They made us feel like we all were sorority sisters (but without the back-stabbing, of course!) and we were totally comfortable with them all. So, much so that my friend and I were the first to arrive and the last to leave! I never do that, unless it’s a party for a males-only gym, with all cute guys.

As someone who attends many small-theatre productions throughout the year, I don’t laud one company over others. (In all honesty, I’m sure that I would if I were in one, like I always did on my show when I was in the Laugh Factory Improv Troupe for a couple of years, but, with the success that you’ve all made of this website, knock on wood, who has time for acting anymore?)

But I did attend a fun fund-raiser for the Seaglass Theatre Company recently, and the party was well-done, so I thought I’d tell you about it. (And I did review their Wonders Of The World last summer, which you can find in the Theatre section.) 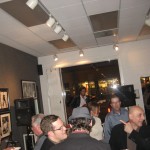 I’ve noticed over the years of throwing my own soirees that the secret to a happening event is to hold it in a small space so the guests have to mingle. They achieved that by having it in an art gallery in the Valley, that featured interesting photography, which added to the atmosphere.

Food is always the #1 consideration to me at a party, (Mr. X says, “Food makes the party,”…and he’s skinny!,) and they did a nice job here, with basic home-made eats presented creatively. There were three stations that featured menus from different cities that mean something to the company: Los Angeles, Chicago, and New Orleans. I could not stop eating the jumbalaya, so props to the Seaglass member who cooked it up!

They put-up a small stage in the front of the gallery and had bands and lone singer/guitarists throughout the evening. I guess the musical highlight to most guests was seeing Seaglass board member James Denton, from Desperate Housewives, rocking-out with his band.

Here’s where I must make a confession, that leads to an amusing story. I make a concentrated effort to watch every new show before I pass judgment, but most I can’t get through the first few minutes of, and just don’t have time to waste in my life. That’s what happened with Desperate Housewives when it premiered, so I’ve never watched it outside of those first minutes. Consequently, I’m not familiar with the cast, except for the female leads.

So, when a man I knew at the party introduced me to James Denton, I just said “nice to meet you,” as I do to everyone, and he went about his business. The man asked me why I didn’t have any questions for the guy (who was James.) I queried, “Why would I have questions for a stranger?”–I thought James was just a friend of his! (I know–you Housewives fans are in shock.)

So, I’m sorry to report I have no dish on that front, except to say that he seemed like a really nice guy and people there said he was. He seemed very fatherly and genuine, so I liked him, no matter what his job is. But I’m sad I didn’t take a picture with him to show to my friends who might be impressed.

Sidebar on that issue: I find it strange when people give actors extra credit for being nice or real or down to earth–we’re just people! Why shouldn’t we be all those things? Everyone should be! (I was always amused when viewers came up to me to say hi, and then surprisedly told me, “You’re so nice! You’re just like you are on your show!” I always was thinking, “Of course I’m the same–I’m me!)

Anyway, I wish Seaglass the best of luck on their upcoming season, and I’ll try to review some of their plays. And I do think it’s really nice for an actor on a successful series to stay true to his roots. Maybe I’ll even sneak a peek at his next episode! (But don’t hold your breath.)