Trending
You are at:Home»Uncategorized»MISCELLANEOUS: I'M ON TWITTER NOW!
By Karen Salkin on October 23, 2011 · Uncategorized

There’s not really much more to say–the title basically says it all. I’ve broken down and begun tweeting. 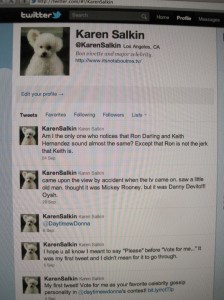 If Twitter had been an option when I was doing my TV show, Karen’s Restaurant Revue, I would have been an avid user. It would have been a great way to stay in touch with all my loyal viewers. But nowadays, I don’t even know how people have time to live life with all the social media they’re engaging in!

But, with my going back and forth to New York so often now, nursing my poor little mother back to health, this will be easier for me to give short updates on what’s going on to anyone who’s interested. Not to mention my daily, if not hourly, bon mots that only Mr. X and a handful of pals have been privy to up until now.

(Here’s one I should have tweeted, but was too lazy: on the night of the “Most Memorable Years” dances on Dancing With The Stars, a little while after Carson Kressely had already had his turn on the floor, he was sitting in that celebrity area, and Maks was behind him, fixing Carson’s collar. I said to Mr. X, “Is it too late for Carson to change his most memorable experience?” And that was before I had watched previous shows where Carson declares his crush on Maks! Yup, that’s just one example of the gems you’ve been missing.)

So, now especially while I’ll be in New York for the next two weeks, and therefore may not have time to write daily columns, you may want to check-out my tweets. My “handle,” or whatever it’s called, is @KarenSalkin. Clever, eh? You can tell I put a lot of thought into that one!