Trending
You are at:Home»Uncategorized»MISCELLANEOUS: I HATE THE NEW HOTMAIL!!!
By Karen Salkin on April 3, 2013 · Uncategorized

I HATE THE NEW HOTMAIL!!!

Why do companies, especially ones on the internet, feel that they have to keep “upgrading”?????

I have been a very loyal Hotmail user forever! I began my internet journey with two other email accounts, but when Mr. X singed me up for hotmail, even though I abhor change, I felt instantly better. It was perfect for me. (Since then, newspapers and websites I’ve written for have assigned me two others, and, as a joke, Mr. X went even one further. So, I think I have six accounts all together. But I use only three; mainly hotmail and I check two others occasionally.) 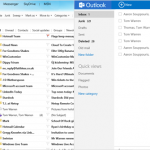 This comparison is from www.theverge.com because my old account is already no more. The former preferred style is on the left.

Over the years, the Hotmail people have changed it a few times, making it a bit harder to work with, not easier. But this newest change is driving me crazy!

Yes, I absolutely know that it’s trimmed in a color I love, Monopoly’s “Boardwalk Blue,” (a term I just coined, I believe. Yay, me!) But my like of it stops there.

It’s so hard to use! You have to think of adding a subject line on every single email! Who has time for that??? And they don’t let you know how many contacts you have! And there’s no top to the page, really, so you have to try to remember if you scrolled already! It’s just horrible.

I guess someone has to justify his or her time on the payroll, so they come up with these inanities! It’s just nuts!

And you have to type the whole message off to the right side, rather than to the left, where all writing begins in America, or in the center. I can’t stand it!

As someone who reads and sends hundreds of emails a day, (vomit to begin with,) I want it to be easy, not difficult! I know they won’t go back to how it was, because no one ever admits their mistakes, but I’ll keep my fingers crossed. [Note: even Mr. X hates it, by the way, and he’s a techie.]

And, if any of you are happy with your email service, please let me know in the Comments section, so I can look into them. (I don’t like Gmail or Roadrunner, either, by the way; they’re actually worse than the new Hotmail, if that’s even possible!) Help!