Trending
You are at:Home»Uncategorized»MISCELLANEOUS: HAPPY 2011!/EXCLUSIVE SEDAN
By Karen Salkin on January 10, 2011 · Uncategorized

After a natural-phenomena-filled three weeks in New York, including an unusual lunar eclipse and the Great Blizzard Of 2010, (as it’s being called,) I’m happy to be back in Los Angeles. (And just in time for my January 14th birthday, I might add!)

Don’t get me wrong–I had a “phenomenal” time, in every sense of the word, even though Mr. X thinks that we’re not “winter people,” (as he stated in an absolutely hysterical email that he sent me the other night–from the next room!) And, as space permits in the days and weeks ahead, I’ll fill you in on all the gory details, humorous and not. (But you know me–it’s all funny to me now.) 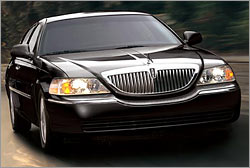 But first I must laud the company that made my leaving town, and coming back in, so easy and stress-free. Exclusive Sedan was a dream to work with! Trust me, I’ve worked with many different limo companies through the years, (including, regrettably, hooking one up with a very prestigious television network account,) so I’m more than familiar with luxury transportation. And now I feel that I’ve finally found one that does it the right way.

I first came upon the men who run Exclusive Sedan at one of the GBK suites, and we chatted for quite awhile. They were pleasant and seemed sincere, so I made a note to try them out the next time I needed a car. Mr. X and I always take each other to the airport because I hate leaving being on time for a plane in the hands of strangers. But we were traveling together this time, so I had to trust someone and Exclusive came into my brain.

As soon as I saw how efficient they were with the paperwork and email confirmations, I knew I was in good hands, and that they wouldn’t be receiving a hysterical phone call from me on the morning of our travel. Mr. X was a tad concerned, at first, because we needed the car to be here at 6AM, but he needn’t have been because we looked-out the window way before that and saw the car already here!!!

Andrew was the driver and could not have been more perfect. Besides being beyond on-time, he was very professional and had knowledge that even I, the great “cruise director” and “human GPS,” (as friends have called me,) did not! For instance, I needed to mail something before New York, and Andrew knew exactly where a post office was near the airport, and the best place to pull-up so that we didn’t have to get out of the car. And this one I ashamed to report about myself, but I was never aware of the Premiere Check-in entrance! We were amazed! It’s little extras like those that impress me.

Another bonus is that even with four full-size suitcases and three carry-ons, we didn’t need a stretch limo–a town car had plenty of room. We were pleased and surprised.

The whole outbound experience was so easy that I never stressed about our return during the whole three weeks away. I had given Exclusive our itinerary before we left, and we knew we were in good hands. I just sent them an email that morning, but was so confidant, I never even checked back for a reply!

I called when we landed at LAX at 11PM, (an hour early!!!), and was told that our guy, Mike, was already in baggage claim! How’s that for being on top of the situation???

I wish all of our time in New York had been as buttery as Exclusive made getting there and back. Maybe next time, I’ll just skip the plane ride and take a sedan!