I can’t believe it’s April already!!! I swear—I thought that March was just beginning. Why is life going so fast?!

So, anyhow, I have a couple of thoughts from the past few days, so I’ll share them quickly. 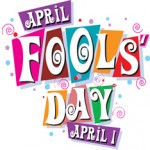 First of all, in case you hadn’t noticed, I took yesterday off. I had to do that because I didn’t want to remind my pals that it was April Fool’s Day! It’s my favorite day of the year, and I had to “get” as many people as I could. I got everyone I set out to, but not as many as I usually do because, as the past did, the day just got away from me. So, don’t be insulted it you didn’t receive a personally-designed April Fool’s joke from me—there’s always next year!

Speaking of waiting a year for this date, I must commend the only other person (besides Mr. X who got me late at night when I was too tired to be on my guard) who got me! Sheila Tracy of Galena, Ohio got me good…in an email, no less!!! When I congratulated her, (because I’m just as good a victim, in this case, as I am a perpetrator,) she said she had been waiting it out for a year since the successful prank I pulled on her in 2012. That’s joke dedication, boy!

And no, to the people who already asked today, that giant “Happy March” sign in the big box is not an April Fool’s joke! My web guy is off today, and he’s the only one who can change it. I didn’t want it changed yesterday because I didn’t want any of my peeps, especially Mr. X, to be aware that it was April 1st, so that I could pull off all my jokes.  There should be something equally goony in there by tomorrow.

Here’s a quick tutorial on how to do these jokes, which many of you need. I want to prevent another one like a Facebook pal pulled yesterday, which was really bad because she did it all wrong. I could tell it was a falsehood right away, but most of her friends were crushed when it was revealed as a joke. So, here are the main points of how to pull off a successful April Fool’s prank:

First of all, it can’t be horrific or really painful, in either direction! That’s just not acceptable.

Secondly, you have to make it something bad, so the recipient will be relieved when you take it away. You can’t tell them something great, like they got a job or somebody likes them, etc., and then take the good thing away. That would just be a bummer all the way around. Here’s an example of how it should be played: As I was leaving the house in the morning, I told Mr. X that a new potential co-worker was coming over earlier than expected, and he had to entertain her until I got back. That was a situation he more than didn’t want to happen, so when I gleefully declared, “April Fool’s!,” he was really relieved and could join me in my mirth.

Thirdly, the more based in truth it is, like in the above case, where I made it a worker who he knew would be coming over sometime in the next month, when I would be home, but he wouldn’t, the more believable it will be.

And, most importantly, it has to be quick. You can’t prolong the pain, or it will lose it’s goal of making everyone laugh. It will just make you look like a douchebag.

So, there are the secrets from the supreme jokester. Use them wisely. [Note: actually my old pal, Jeanine Anderson, was even better at it than I, back in the day. Two that she pulled on me, that have lived in infamy, were really elaborate, and made me sort-of sick. But I was so relieved when she said those three magic words at the end.] 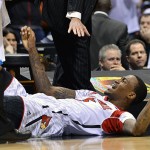 Okay, switching topics, in last-day-of-March sports news, I want to wish Louisville basketball player, Kevin Ware, a speedy, and complete, recovery from the horribly broken leg he suffered during the final Elite 8 game in the NCAA basketball tournament. CBS has stopped playing the tape, but I was watching live, and couldn’t believe my eyes. We saw his shin bone break in two, and his leg hanging there, with the bone sticking straight out. I, along with his teammates, coaches, opposing players, and even the broadcasters, went to pieces. (Pardon the sort-of pun there.) It was perhaps the most horrific thing I’ve ever witnessed. I just could not stop crying. Nor could his big, strong guy squad. Outside of the sobbing, there was stunned silence all around. Kevin had surgery within two hours, his team won, and then they made a beeline for the hospital to share the victory with him. By yesterday, he was already walking on crutches. But the awful break transported me right back to seeing almost the same thing happen to the Washington Redskins’ Joe Theismann when I was young; that injury ended his pro football career. But Ware is way younger than Theismann was, and medical procedures have come a long since then. So, I, and the whole sports world, are praying for his return next season.

One more sports note: CBS was hoping that a tennis final would be over before the pre-game show for the tourney, but no such luck. When the final match between Andy Murray and David Ferrer went into a last set tie-break, CBS relegated it to the Tennis Channel!!! If I had been taping it, which would have meant I wouldn’t have known to switch over, I would have been livid, as I’m sure many were. They couldn’t have let the match finish, let the viewers see the brief trophy presentation, have a proper pre-show for the basketball, and then have the game start perhaps thirty minutes late??? We sports fans (and I’m sure the players, as well, being sportsmen themselves) would have understood, and appreciated, that all, and lauded CBS for that decision. The way they did do it though, reminded me of the legend of the “Heidi Game,” way back in the day. (I wrote about it somewhat a few years ago, which you can read here: www.itsnotaboutme.tv/news/2010/09/14/karens-rants-espn-you-suck-aka-heidi-re-visited.)

And, yet one more horrible sports note: Andy Enfield, the coach of Florida’s Gulf Coast University’s fabulous basketball team, has just defected to the evil USC! Talk about a traitor. He just went from so likable to horrible creep, for me. I’m sick over it. Is having a zillion dollars and an former model for a wife not enough for him?! I feel terrible for his young former team. I hope that FGCU gets someone great to be their new coach, and that they win it all next year! Beating rotten USC along the way, of course!

Is this guy the epitome of a douche, or what? And I love the overalls with the high heels on him! Ugh.

And lastly, switching topics once more, since last night was a Dancing With The Stars competition one, I have to say that Sean Lowe, that Bachelor creep is one of the biggest douches I’ve ever seen. And trust me, I’ve seen more than my share of them. He can’t move at all, (no wonder he’s a born again virgin!,) and he thinks he’s the bomb! Who’s voting for this douche?! I want names! All he did last night was dance to YMCA, something we’ve all done at clubs and weddings, and they’re calling that a ballroom dance?! And he had four guys joining him who can dance, so he looked even worse to the normal eye. But viewers will vote for him because they’ll think the whole presentation is fun. Having to watch him, and the just-a-little-less-creepy Lisa woman, is seriously ruining the show for me. We need to get them both off there, and fast!

Okay, that’s it for welcoming in April. Now I have to go face the always-daunting task of making reservations for what may be my last trip to New York. I hate making reservations more than anything. Combine that with the stress of embarking on a long trip, not knowing with what dramas I’ll be met, and you’ll have my mental and emotional conditions for the next few months. Wish me luck!

And Happy April, everyone! Hope it’s a great one!