ALL THAT SKATE REVIEW

I took copious notes during All That Skate’s opening night at the Staples Center this past week-end, because the way the show was done gave me the perfect opportunity to jot down my thoughts quickly in-between acts, but now I decided that it doesn’t have to be inspected that closely. 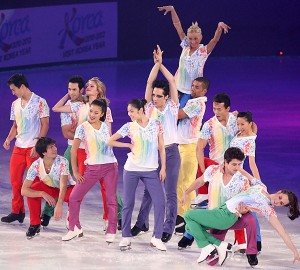 All you really need to know is that this is a fun show with a stellar cast of great skaters, all of whom, with the exception of newcomer Ashley Wagner, have been Champions of either Nationals, Worlds, or Olympics. Outside of the amazing Chinese pair of Shen Xue & Zhao Hongbo and thirty-year-old Michelle Kwan, who looks absolutely fantastic, this is a very young cast. And their vital performances reflect that youth and exuberance.

Karen with Men's Champion Johnny Weir at a previous event.

Each time I deemed someone to be my favorite, it changed with the next number. The largely Korean audience went wild for their own current Olympic Champion, Yuna Kim, who’s a beautiful lyrical skater. But aside from her popularity, which was no surprise, and the audience’s overwhelming reaction to perennial crowd favorite Johnny Weir, of whom I’m a major fan, both professionally and personally (I used to know him during the Champion On Ice days, and he’s just adorable and charming,) of whom my guest exclaimed after his first number, “I don’t have to see another skater,“ the real surprise to me was former World Champion and Olympic Silver Medalist, Stephane Lambiel. (How’s that for a run-on sentence???)

I wasn’t surprised by his fabulous performance because I’ve long been a fan of this Swiss spinning master. I was pleasantly surprised that the audience went so wild for him, leaping to our feet as one after both of his solo numbers. Great to see such a knowledgeable crowd in attendance. Stephane even made me not miss the gorgeous Brian Joubert, who was listed in the original press materials and who I reported to you would be in the show. I don’t know what happened there, but with all the major talent we saw, he was not missed at all. 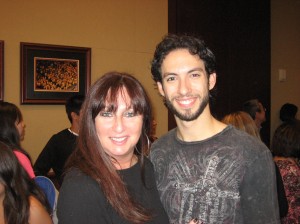 I was planning on going backstage after the show, as I’ve always done with all ice shows forever, to say hi to the athletes I’ve known over the years, like Johnny, Stepane, and the lovely Ben Agosto, who, with his partner, is a four-time world medalist in Ice Dance, but for some reason unbeknownst to me, it didn’t happen this time. (Luckily, I got to greet other legends in the skating world, like Champions On Ice founder Tommy Collins, looking better than ever, I might add, and the never-aging Mr. Debonair from my childhood, Richard Dwyer, at half-time. I hope they didn’t think me rude or uncaring to not meet them backstage post-show, but rather realize it was out of my control.)

I do have one small gossip tidbit for you skating fans, but as a blind item, I’m afraid, which I’ve never done before, but I want to still protect the skating fam in general. There was one man in the audience, whom I’ve also known for years, who sat there like a supreme sourpuss. In the front row! He didn’t applaud for one single act! Including at the finale, when the rest of us were on our feet, whooping and hollering like lunatics. And, almost more than anyone else, he should know better. I hate it when people from the same world show-up at performances and don’t support their fellow whatevers. Even if I don’t like another actor’s performance, if I’m in the audience, I always at least put my hands together to be a good sport. I was really shocked by the negativity he was projecting.

But that weirdness aside, All That Skate is a really fun show, with all skaters who are known to current audiences. From the spectacular costumes (especially Yuna’s stunning dress in the second half) to the colorful videos that were projected on the backdrop the whole time (which was honestly sometimes a little distracting, but usually fun) to the hip-hop dancers and young Korean girl singer, there was not a moment of boredom.

So, if the show comes to a city near you, I recommend seeing it. The only problem for you is that you guys won’t have my favorite usher of all time, the always-pleasant-and-willing-to-help Luis Ayala at your venue because the Staples Center is his lucky home base.