Trending
You are at:Home»Uncategorized»LISTS: BEST MOVIE PERFORMANCES OF ALL TIME
By Karen Salkin on December 28, 2010 · Uncategorized

BEST MOVIE PERFORMANCES OF ALL TIME

I’m sure I’m forgetting one or two, and it will hit me sometime later and I’ll get angry at myself for not thinking of it in time, but here’s what I’ve come up with so far.  (And for this list, they’re in order.) 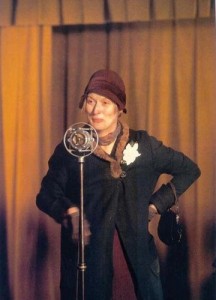 1) Meryl Streep in Ironweed. It was too painfully real for Mr. X–he had to leave the room after she sang in the bar. (As with about half of these, I saw them on TV.)

2) Leonardo Di Caprio in What’s Eating Gilbert Grape. I had never seen him before and I kept marveling at that a mentally-challenged boy could act that well. I still cannot believe that that was just a young actor being so truly amazing at his craft!

3) Dexter Gordon in Round Midnight. I actually kept checking to see if it was really a documentary.

4) Sean Penn in I Am Sam. He was so immersed in this role of a retarded man and his daughter that I kept forgetting he was really Sean Penn, which is amazing when he’s such a famous actor.

5) Sean Penn in The Assassination of Richard Nixon. Such a little-seen film but there was one scene especially, in the middle, that knocked my socks off. (I believe he was on the phone in it.)

6) Peter Sellers in Being There. Shame that DeNiro made Raging Bull that same year, or Sellers would have won the Oscar.

7) Speaking of which, Robert DeNiro in Raging Bull. I think this is the film that Mr. X and I quote the most.

8) Penelope Cruz in Vicky Cristina Barcelona. She was hilarious! And this, from such a serious actress.

9) Dakota Fanning in I Am Sam. She was just a little girl then, but so perfect.

10) This is the only one not in order–Javier Bardem in ANYTHING!!!