Trending
You are at:Home»DINING»LIST/DINING: RESTAURANT CLOSINGS IN LOS ANGELES OVER THE YEARS THAT I'M SAD ABOUT
By Karen Salkin on August 7, 2012 · DINING, LISTS

As a long time restaurant critic, and fan before the profession even kicked-in, I’ve seen a lot of beloved Los Angeles eateries go by the wayside.  It’s so much harder of a business than the general public can ever imagine.

Mr. X says that every restaurant I choose to go to is closed.  I hate to say that in many cases, he’s correct.  Sometimes we just go on the wrong dates or times, but more often than not, unfortunately, the place has closed down for good.

I can’t remember what got me started on getting nostalgic over these closings over the years, but I believe it was recent thoughts on the first one on the list, which I’ll explain when we get there.  Maybe these will bring back some memories for you guys.  I hope not sad ones, even though you may be sad that they’re gone, like I am.

So, see if you, too, lament the closing of these eateries of yesteryear. And, please feel free to join in the misery by adding ones of your own in the comments below.

This list is in the order that they came to me. 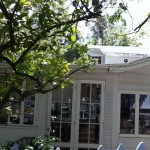 Four Oaks—the saddest one of all!  Every July, I get all depressed over it again, which is what I believe got me started on this list to begin with.  Seven years ago, on the day that we consider to be our anniversary, (we have a lot of them,) all I wanted to do was go to lunch there.  Not much to ask.  I had been really sick for two weeks, but forced myself to get up, wash my hair, and put on a cute, new, anniversary outfit.  I went downstairs to get something, after Mr. X even put on a hip suit, and when I got back up, he was undressed and back in bed!  He had just caught my flu! He apologized and said we’d go when he feels better.  And guess what?  By the time he did, in over a week, the place had closed!  After about fifty years!  Happy Anniversary to us, eh?  [Note: It’s still sitting there, with tables all set, and no one has inhabited it since!  It’s a sorry sight.  And site.]

Ship’s–nothing like making your own toast at your table!

Mumm’s—a coffee shop in North Hollywood, with the best zucchini bread in history!

Westside Cafe—this was a little French restaurant in West LA, where we ate at least once week during our first couple of years together. I think its closing is what made Mr. X not want to go out to eat anymore. Seriously.

Ye Olde Spaghetti Factory—this was the second most recent closing on this list, I believe. It was in Hollywood, and we were just as sad about the Noodle one in Venice. The best places to eat for not a lot of money.

L’Hermitage—the classiest restaurant on LaCienega. And they welcomed me with open arms!

Jimmy’s—You knew you had made it when Jimmy called you by name. We actually ran in the Jimmy Stewart Marathon on the same celebrity team!

Ma Maison—never has there been a room full of more celebrities on a daily basis.

Joe Allen’s—when I first started going there when I got to town, I actually thought it was a private club for celebrities! For real. And oh those burgers!

Duke’s—this very recent closing is the most shocking; it had been around forever and was inhabited by denizens of the bluesy-rock world, such as Tom Waits, Ricki Lee Jones, and Chuck E. Weiss. It was my very first review on my very first show! They had asked for my picture to hang on the wall, which was a sure sign that you had made it in this town, but alas, I got lazy and never gave them one, which I regret to this day. After it moved from Santa Monica Blvd., to make room for the Ramada, to the Sunset Strip, it was never the same. We basically picked-up food from then on, rather than eating in. But oh how I’ll miss those Club Butter Crust Grilled sandwiches and Bobby’s Salad. I can taste them right now!