I’m excited that now that I’ve had my third Covid vaccine I’ll be attending a show this very week-end, for the first time in a year and three-quarters!!! I don’t think that I’ve ever been away from the theatre for that long since I was around two!!!

Now that theatres all over have finally opened up again, we have the incredible opportunity to begin our experiences at those venues anew, and to become better audience members than we were before. 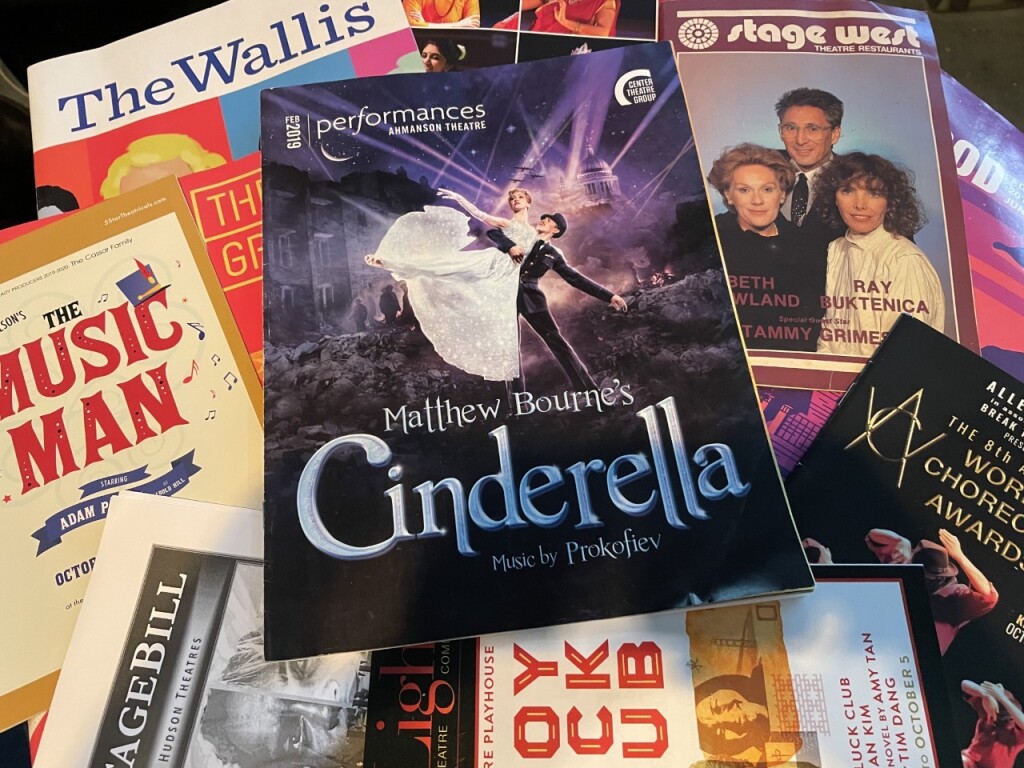 Just a very few of my own hundreds of theatre programs! Photo by Karen Salkin, as is the pic at the top of this article.

I actually have many suggestions of how to accomplish that, but, not wanting to overwhelm anyone, I’m concentrating on one tiny improvement today. And that is…to read your programs! Not during the presentation, of course, which I’ve seen some rudesters do over the years. (So they’re abusing their eyes as well as the people around them.) But either before the show begins, at intermission, or even at home.

There’s actually a lot to learn in the programs; they’re usually a fount of information! First and foremost, you learn about the players, some of whom you may even see in the future. When I was cleaning-out my childhood home a few years ago, I came upon a treasure trove of old Playbills from Broadway and off-Broadways shows; I had even saved a bunch from all the summer stock my parents were smart enough to take us to. And I came upon one from when I was a little girl, with the entire Daly family in it—James Daly and his future-star children, Tyne and Tim! I’m so glad I took the time to re-read those old programs.

In some of the modern-day ones, you can often find-out the interesting backgrounds of shows. And, of course, even though many of them are actually advertisements, there are usually restaurant recommendations for the area of the theatre you’re in. 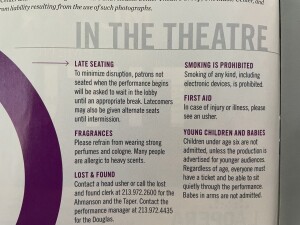 The notices in the middle of one theatre’s program, asking patrons to refrain from wearing fragrances! Photo by Karen Salkin.

But, most importantly to me, even though it’s in small print in the middle of a further-back page, is the note to not wear fragrances!!! It’s obviously too late for the admonition when the patrons are seeing it, but we can all hope they’ll remember it for next time. It is truly beyond rude to wear any sort of fragrance to the theatre where you know you’re going to be sitting shoulder-to-shoulder with a stranger who might have health issues! Please, everyone, try to have even a modicum of kindness when you’re going to be around other people!

One of the few good aspects of being forced to stay in the house for a year and a half is that…I’ve had no asthma attacks! Not a one. That’s because I haven’t been near anyone who’s wearing perfume, or has cat hair on their clothing, or has recently smoked a cigarette, the trio of things that threaten my life. Literally!

Now if only the programs would caution people to not wear their hair up, or wear hats, or glasses on their heads, all of which obstruct the view of the people behind them. And ask them not to chew gum loudly, constantly play with their hair, or stage-whisper to the person next to them. 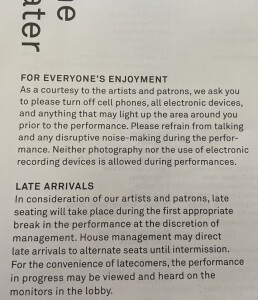 And it would be wonderful if they’d ask audience members to not look at their phones during the performance, because the light is annoying to everyone around them. Believe me, you all know how sports-obsessed I am, but I would never check my phone for scores during a production, as I see so many men do!!! I marvel at how people can be so rude.

While some programs do say to please not text during the show, (and theatres even make announcements to that effect before the show begins, along with telling them to not open their noisy candy during the show,) it boggles my mind that even one person would require that talking-to.

What writing this is making me realize is just how sad it is that people need these reminders of how to be courteous to their fellow man to begin with. Shame on the ones who don’t know how to act in public.

So if everyone would please just heed all these suggestions, the polite among us would be the happiest theatre-goers ever! Now read those programs to see what else you can find-out in them.