Trending
You are at:Home»KAREN'S TIPS»KAREN’S TIPS: TIPS ON WATCHING THIS LATEST 2018 ROYAL WEDDING
By Karen Salkin on May 17, 2018 · KAREN'S TIPS

Just a few days more than seven years ago, I gave you all the best tips for watching the grand wedding of Kate and William, a union I think everyone in the world was delighted to witness.  So even though I’m not at all into these nuptials, in the interest of fairness I feel that I must do the same for Harry and his commoner, (in every sense of the word,) Meghan.  (I’m just wondering how soon the Brits will start referring to her as “our Meggie”? The fact that they haven’t yet might be telling.) 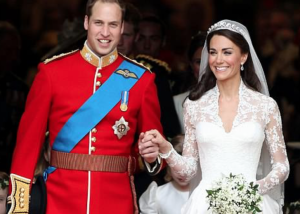 The lovely William and Kate then…

Some things have stayed constant since then, (after all, this is Great Britain we’re talking about, where things change at a snail’s pace,) but one major situation has changed, which is really interesting in the scheme of the world—a real Prince of England, who is now sixth in line to the throne since William’s new son was born, (do you believe he and Kate have had three kids in just seven years???,) is allowed to not only marry a divorcee, who is older than he, and an American, to boot, but a black girl!!!  (I applaud that last part, by the way.) Who ever thought any of that would happen in our lifetime?!  (But maybe it means that someone is soon planning to prove that he is the son of James Hewitt, rather than Prince Charles, so they can get rid of both Harry and Meghan in one fell swoop.) 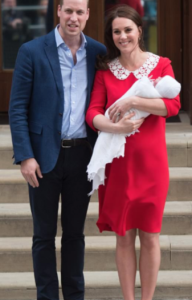 …and just a few weeks ago, with their new baby. And they look the same!

[Note: In case you haven’t noticed, things are already falling apart with her family. How did the Queen let Harry choose this woman?! If we can all see that this is an impending train wreck, why can’t the Royal Family??? Or do they just not give a fig?]

On the positive side, another change is that this time, I’ll be live-tweeting the proceedings. Yay!  So, if you don’t already follow me, this would be a grand time to do so.  @MajorCelebrity.

But what hasn’t changed is how to watch the royal wedding, which takes place on Saturday morning at the crack of dawn, United States time. (Check the TV listings for all the coverage options and times.  Many stations will repeat it all at some point, but I’m planning on watching it live, beginning at 1AM, complete with wardrobe and appropriate fare. And on the BBC feed, of course. It’s the only way to do it, dah-lings!)

So, here again, let me help you all out with some tips for watching the Royal Wedding to make it the most fun experience for yourself, no matter what you think of the new duchess.  [Note: That will be her title; not “Princess,” which I have a feeling will really chap that fame-seeker’s hide.]

Make it a True Fete:  How fun would it be to have a party for it?  If, as I am, you’re on the West Coast of America, a late-night, after-club gathering will be perf.  After all, you’re already awake and in a party mood!  On the East Coast, how about a very early morning week-end pajama party brunch?  (My readers in the rest of the world can figure it out from there.) 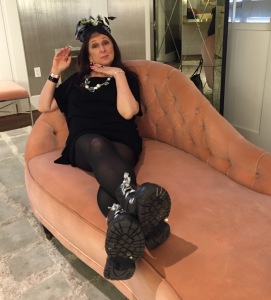 Wardrobe:  Women–you absolutely must wear a hat!  It’s mandatory.  And not just any hat–it must be a fascinator.  And don’t forget the skinny gloves.  Even if the rest of your ensemble is pajamas and a bathrobe, which both must be silk, of course!

Food:  As many of you know, my real area of dining expertise is Afternoon Tea, and I’m very exacting about it.  Even though I’m super strict about the rules of this repast, (such as: that High Tea is a totally different animal from Afternoon Tea, the actual dishes have to be served in the correct order, and the time of this meal must be somewhere between 2-5PM,) I’m loosening them a bit for this occasion, or else we could not partake of all that deliciousness at this early morning hour.

So, please have at least some of these treats during the festivities.  I’m sure that a few of you will love the excuse to sip a spot of sherry or champagne at this hour, too, so go for it!  I wholeheartedly recommend that at the very least, you feast on some scones with clotted cream and jam (my mouth is actually watering as I write that,) and tea with milk and honey.  (Just remember to hold your teacup with your pinky out to the side!) 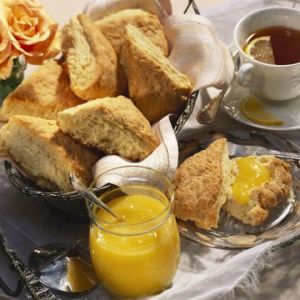 Scones with lemon curd. (There’s a lot of lemon going on in this picture!)

Scones are very filling, so even one should get you through at least the first few hours of coverage.  And some fresh strawberries and cream, in any form, will be a lovely accompaniment.  (And, with that dish, you can be satisfied knowing that you’re fulfilling a “fruit portion” of your diet so early in the day!)

If you need a bit more hearty sustenance, add a few finger sandwiches. Chicken, turkey, or salmon fillings will make it feel the most like a meal, while cucumber and cream cheese ones will be the classiest. And most proper for the occasion. And a fun, flavored cream cheese spread, such as a nutty one, on cinnamon-raison bread, will be a special guest star. 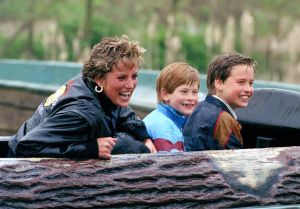 This is my favorite photo of Princess Diana and her young princes.

Extras: I suggest you have at least one big box of tissues handy, just in case.  You may think you’re above the emotion of it all, and are just watching for the history of it, but trust me, even if, like moi, you’re not a fan of this bride, the fact that it’s a wedding at all will get us a tad teary-eyed. (And many of us will be thinking of that poor little boy who had to walk behind his beloved mother’s hearse, which will bring on the waterfalls for sure!)

And, since this is England we’re talking about, and we want to keep up their traditions for this special occasion, you don’t even have to brush your teeth for the wedding!  I’m just saying.

I promise to try my best to live-tweet it all, between bites of scones, that is!  So please don’t forget to follow me before then. @MajorCelebrity. 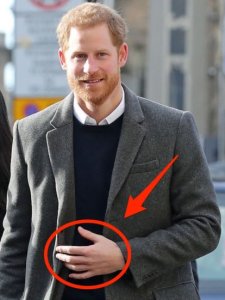 Next Step: I assume that, after staying up overnight to watch the proceedings, (which is after being out all night, reviewing a new play and opening night reception,) I’ll be too exhausted for the rest of the week-end to write the review of it all for Monday.  But I really do plan to try, so look for it here early next week.   Maybe I’ll even surprise us all, me included, and not hate the new Duchess.  There’s only one way to find-out.

My only two real hopes are that Harry is truly happy, (and stays that way for the rest of his life.)  And, more importantly, I’m praying for the safety of the entire United Kingdom during what should be an uber-festive time for that country.  I hate that these days, we have to give even a second’s thought to what crazies might be planning.  What a supreme shame it is that the world has gotten so scary.  But that just means that we should all appreciate being alive during a real-life fairy story even more.

Whether you watch live along with me, or later in reruns, have a fabulous Royal Wedding Day.  Remember, they’re few and far between, so enjoy.  Ta-ta for now.  And cheerio!  (And don’t forget to check-out my live tweets!)