Trending
You are at:Home»KAREN'S THOUGHTS»KAREN’S THOUGHTS: ISOLATION PART VII—THE PEOPLE I FEEL BAD FOR AND THE THINGS I MISS
By Karen Salkin on June 30, 2020 · KAREN'S THOUGHTS 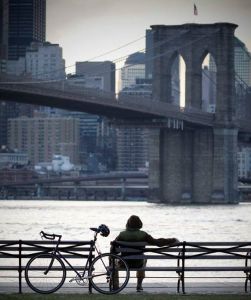 As June is winding down, and I’ve been in the house for just about sixteen weeks now, I’ve had tons of time to think about this entire “stay at home” situation.

People keep thinking that I’m missing so much in life for these past few months. They all assume my bon vivette self is going crazy in the house.

But it’s all really quite the opposite. I’m mostly enjoying just chilling and bonding with Mr. X. (And not having to do hair, make-up, and wardrobe for all these months!) And even when I do get a tad nervous about life right now, I know that no matter how long I’m stuck inside, I always have tons to do here. I have never in all this time, for even one second, felt bad for myself.

But I feel awful for all the people who… 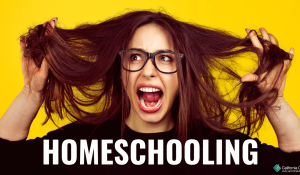 …are losing loved ones and can’t even bury them properly!

…can’t get the proper medical attention medical personnel who basically have to work now, (like my new nurse friend, Betsy) 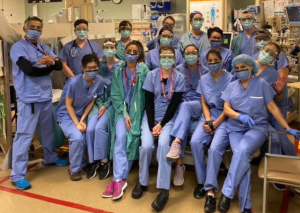 …have to work in places where there are no proper precautions taken, and alongside infected coworkers

…are victims of domestic abuse and violence, and can’t get away from their abusers because they’re in a house together all the time now

…are performers who were due to be in a Broadway show, which, for many, is their dream come true, and their shows are now cancelled

…are non-famous musicians who don’t have work now.

I could go on. But I’m assuming that we all feel the same way about what’s happening, so you all get it.

I don’t miss all my usual events—parties, screenings, play openings, gifting suites—because…they’re not happening right now! It’s not like I’m being left-out of anything—there’s nothing going on.

I don’t even miss restaurants, even though I’ve been eatery-obsessed my entire life! I can tell you what I had for so many meals since I was two! (But back then, all I ate was hot dogs, watermelon, and cucumbers! And chocolate milk and little soup crackers for my snacks.) I’m just grateful that I’m also just plain food-obsessed, so I’ve been content coming up with meals for Mr. X and me on my own. (I have to admit, though, that I will be thrilled when someone else does the cooking for me again!) 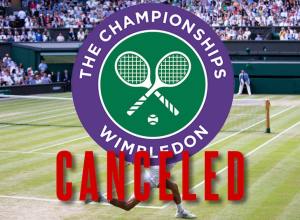 No Wimbledon this year. (And apparently, no one who can spell announcing that it was canceLLed!)

At first, I was really miserable that all my favorite sporting events have gone by the wayside: March Madness, the Figure Skating World Championships, Wimbledon, (which has been cancelled for the first time since World War II!,) and—I can barely even write this one—the Olympics! I seriously have planned my life around watching these happenings for decades now. I had even started writing my column proclaiming that March Madness was beginning. I got a knot in the pit of my stomach when I came upon that now-unnecessary page the other day. [Note: the NBA Play-offs, the entire baseball season, and the Kentucky Derby and Preakness are just postponed. But, in my humble opinion, baseball and basketball should just pack it in for this year. Just sayin’.]

The weird thing is that I’m not really missing them, per se, again because they’re not happening. But I feel awful for all those athletes who have missed-out on what are quite possibly chances of a lifetime. I don’t watch sports for sports sake—I care about the genre so much because I care about the people and their journeys. That was most likely the last chance for the college basketball players, (and perhaps the football teams, as well,) but I hope the same Olympians will still get their opportunity when it’s back on in a year from now. (From my mouth to God’s ears!)

But there is a growing list of some of the few things I do miss. 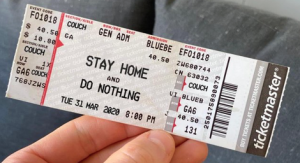 For example, I do feel a tad bad that all the events I had planned, from late March through July, didn’t/aren’t going to happen. But oh well. That should be the worst of it for everyone. I’ve been waiting ages to see the musical Once Upon An Island, and have been feeling bad for a few years now that I had missed a few opportunities in the recent past. So I am totally disappointed that the production that was due to open at the Ahmanson Theatre in April had to be cancelled altogether, not just postponed. The irony is that it was due to open on April Fool’s Day, so that’s the biggest AFD joke to happen to me in quite awhile.

And I’ve really begun to miss bumping into old friends. Or other first-nighters. Actually, the entire social scene, in general.

And I really miss my far-away friends, but I always miss them! Especially my Aspen pals, who are now spread-out around the world: Gina and Aaron in New Zealand, Alex in Australia, Simone and Heinrich in Austria. Who knew they’d all be grown-up parents since we were all last together?!

I also haven’t seen the uber-pleasant Mary since I stopped spending summers in Aspen, although she’s still in that town, which is much closer than all the countries my other pals have settled in. And speaking of Colorado, my two Brooklyn besties, Carol and Patti, have been living near Denver for about a decade now, so I haven’t seen them, either.

I always miss my Rhode Island peeps, most of whom I haven’t seen since Mother’s Day 2013! I’m always thankful I made that trip then.

But none of those absences are due to the coronavirus pandemic; they’re all just due to life. I’m always too busy to travel much, and now that I’m not busy at all, there is no traveling to be done! It’s such a catch 22.

But right now, I’m missing the New York crowd; I was due to be spending the entire month of May there! I feel awful for my young pal, Caitlin, for whose wedding shower I was making the trip. Not only has she missed-out on those festivities, but now her October wedding is in doubt!

So, in addition to here, right now I’m also missing Sheila, Manny, Lauren, Jill, Betsy, Sharon, Helen, Taylor, Joan, and all the rest of the people I was planning to meet up with in the Big Apple.

And my friend Noelle was due to be here in LA this week, for the next fortnight, so I’m really sad that’s not happening anymore. We had planned it for so long! 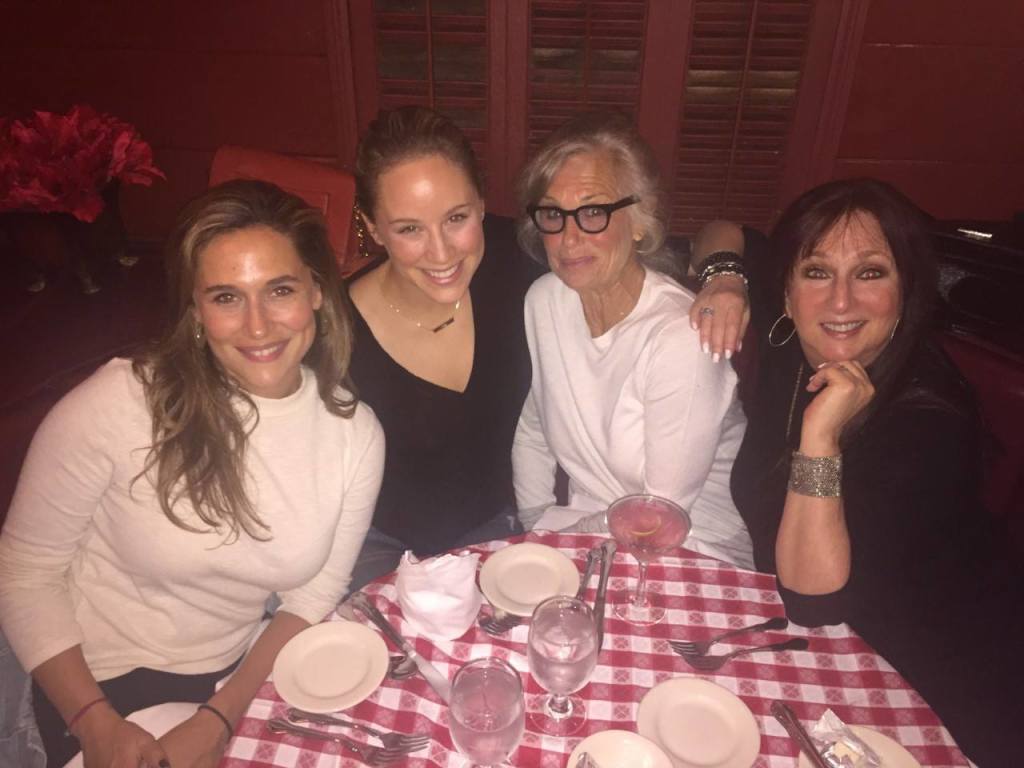 Karen Salkin on the right, at a birthday dinner with friends in the good old days (of last year!) Photo by Dan Tana’s staff. That’s Karen Salkin at the top of this page, as well, looking sad about the world right now. (That photo is by Herb Weil.)

But, luckily for me, that’s the main thing in my “missing” column: friends. I do occasionally think of someone here in LA, and picture running into them somewhere, as I always do when the world is normal, and just hugging them. And then I remember that stuff like that won’t be happening again for at least another year. And that’s the kind-of thing that makes me feel a tad down.

And then this morning, I realized there’s something else I, shockingly, kind-of miss–my old daily routine. It’s no biggie, just something I had gotten used to for the decade that this e-zine has been in existence. This was it before: Getting up early to write before there are too many distractions, FaceTiming with Mr. X while he’s being kind enough to shop for us, sneaking a bit of TV from the night before while he’s out, getting ready for two hours (at least,) and then going out for whatever adventure each night held for me.  I really have almost forgotten how all that feels.  But on the plus side, now I get to sleep late; I get into bed between 1 and 2AM, don’t fall asleep until at least 4, and then sleep until between 10:30 and 2!  Why rush to get up???

Lastly, I know that some of America has re-opened recently, but it’s very possible it will be closing again soon. The idiots who feel that they don’t have to wear masks, and can congregate with hoards of people, are ruining it for everybody! So I’m playing it smart and safe and will continue to stay in until the intelligent and knowledgable powers-that-be, like Dr. Fauci, Dr. Ferrer, Gavin Newsom, and Andrew Cuomo, tell us otherwise. I hope everyone reading this everywhere will do the same.

[Note: And if you’re missing me right about now, because I haven’t been publishing columns as often as before the pandemic, you can always catch-up on the stories you may have missed before—my archives are on the right side of this page. Or just watch my YouTube videos! They’re all right here: www.youtube.com/channel/UCF7mwI2jwcB2xB9dBCBxLZg. Just please don’t judge my isolation looks!]