[Note: all this Manti Te’o news, with new info breaking constantly, is backing-up my awards seasons columns, including many movie reviews and one more gifting suite. I promise those will be forthcoming in the next couple of days, but this insane story is too compelling to discuss in just short tweets.]

Over the week-end, Manti Te’o finally did a sit-down interview with Jeremy Schaap of ESPN. The deal is that it wouldn’t be filmed or taped, but could be voice-recorded, which it was, with a few stills taken as the meeting progressed.

I think the truth of the situation is now revealed: Manti Te’o is an idiot rather than a con artist. But what an idiot!!!

At least he knows that he’s a crazy person because he admitted that he insinuated to everyone—press, family, friends, teammates—that he had indeed met his fake girlfriend in person, because he didn’t want them to think that he was crazy to say someone he never met is his girlfriend!!! Ya think???!!!

I apologize in advance for all the exclamation points and many question marks as my thoughts move along here, but I’m incredulous at his naïveté, stupidity, gullible-ness, whatever you want to call it. At the very least, he has an overwhelming lack of judgement! 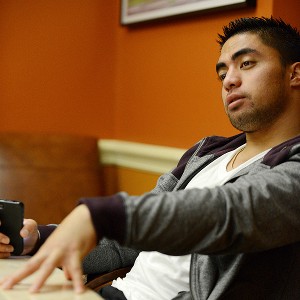 Manti Te'o, explaining it all to ESPN's Jeremy Schaap.

Manti said that his “first clue” that his “girlfriend” was fake was when when she called him three months after she had died! Really?! That was his first clue??? [Note: I wrote this way before Saturday Night Live aired this week-end, and, when I read it back, I erroneously predicted to myself that Seth Myers would do his Really??? segment on this story. I can’t believe SNL missed such a fun opportunity. So, good thing you’re reading this article now!]

It wasn’t when she kept canceling on meeting him in person? Or when her image while Skyping and FaceTime-ing came up as just a black box? Or when she asked for his bank account number, to “put money into his account”??? As Johnny Carson once said to me on The Tonight Show, give me a break here!

In the interview with Schaap, one of the things Manti said is this, about when the supposed dead girl called him three months later: “She said, ‘Well, Manti, it’s me.’ That’s all she said. And I played stupid for a little bit. I was like, ‘Oh, I know it’s you, [the dead girl’s sister]. What do you mean?’ ” That’s when he played stupid??? Not during the entire time of this hoax? Oh, yeah, that’s right—he wasn’t playing stupid—he was stupid!!!

As crazy, and sad, as this whole situation is, it would never have been brought to light if he weren’t a public figure. So, please everyone out there on social media sites, especially young, or lonely people, let this be a cautionary tale for you. I’m fine with couples meeting through on-line dating, (I actually know of a very successful marriage from that method,) but be cautious. Very cautious! And do tons of research. And, by all means, meet the other person, for goodness sake!!! (In a public place during daylight hours, with letting your pals know where you’ll be; you can never be too cautious.)

Addendum: After I wrote all the above, I read some new articles on this topic because, obviously, I’m fascinated with it, as I’m sure many of you are. I ran across one by Ted Miller of ESPN.com, who makes some brilliant points that even I hadn’t thought of! Here’s what he wrote: “Can we completely buy in to Te’o’s account? It’s important to note that since the story broke, Te’o has been huddled with advisors. His agent, Tom Condon, has every sort of public relations, crisis management professional on his speed dial. The prime directive of this brain trust is not to provide you the honest and entire truth. It is to ferret out a plausible version of events that best protects Te’o’s interests. Without, of course, getting caught in an obvious lie.” [Note: his whole column is so well-written that I suggest you check it out.] I can’t believe that I, Hollywood Karen, hadn’t thought of that! I guess that makes me almost as naïve as Manti! At least, my boyfriend, Mr. X is real! (Contrary to what many of my fans, who see me out without him all the time, believe.)

We’ll get to see Manti Te’o tell his story, real or fake, to Katie Couric later on this week. I can’t wait to hear this spin!