Trending
You are at:Home»KAREN'S RANTS»KAREN’S RANT/THEATRE: SHAME ON CBS FOR THEIR TONY AWARDS VERSUS GREASE DEBACLE
By Karen Salkin on May 20, 2020 · KAREN'S RANTS, THEATRE

SHAME ON CBS FOR THEIR TONY AWARDS VERSUS GREASE DEBACLE

One of the wonderful annual events that has, very sadly, had to be canceled because of the coronavirus situation is Broadway’s Tony Awards. The classiest awards show was due to be on CBS on June 7, 2020, but as with all live events this year, it has gone by the wayside.  Especially because…there haven’t been any Broadway shows since March 12!!! 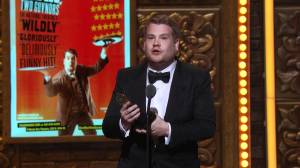 The 2012 Tonys introduced most Americans to Tony Award winner James Corden, who’s also featured in the image at the top of this page, hosting the awards telecast just a few years later.

As I wrote once before, my poor Broadway-musical-loving friend, Noelle Hannibal, had just driven down to New York City from Montreal, Canada, to see four musicals in forty-eight hours. The first day went well, but when she got to the theatre the following afternoon, the management made an announcement that Broadway was closing down that very second, for the foreseeable future. How disappointing for her. And for all the performers.  And tourists. And everyone who cares about live theatre.

So right away, with so many shows not opening, fans started wondering what would happen with the Tonys. As the new version of our collective reality began to set in, I think we all realized if there was any possible way the Tonys would go ahead in 2020, it wouldn’t be anytime soon.

And now we know that it won’t even be this year at all. They’ll either call this season a wash, or just combine this abbreviated one with next year’s. (Assuming Broadway will get to open by 2021!!! And people will be able to congregate once again.)

But CBS just basically piled on this week. Since they now have those two empty hours to fill, they decided to run…the old movie version of the musical Grease! How absolutely insulting to every Broadway performer ever!!! Everything about that decision is wrong. First of all, it’s a movie filling the spot of a tribute to live theatre!!! Second of all, out of that entire very large cast, only John Travolta and the late Jeff Conaway have ever appeared on Broadway. And outside of those two and Olivia Newton-John, no one in the film is even a very good singer. (That aspect of this debacle might be okay, though, because on top of everything else, this will be a singalong version, so the viewers at home can just drown them out.)

But the most egregious element of this horrible decision that CBS made is its downright insensitivity. There are any number of ways that Tonys night could be commemorated on their network in place of the awards show, using Broadway performers, instead of this Grease stupidity. Shame on CBS! How about a sing-along led by Tony winner, (and both CBS and audience favorite) James Corden?! Featuring known Broadway stars. I’m sure that even Hugh Jackman would be more than happy to participate. And so would Neil Patrick Harris. The list could go on and on. I think the entire world, not just Broadway aficionados, would love seeing all that. 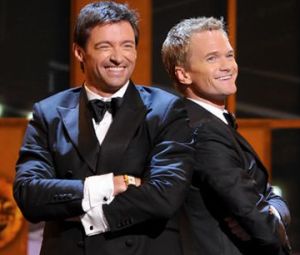 And, since televised benefits seem to be de rigueur these days, (like that absolutely brutal supposed comedy one for Feeding America recently,) this one could benefit out-of-work stage actors, most of whom could really use the help right about now.

Hey, CBS, if I can come up with this concept on a moment’s notice, why can’t anyone at your network???

My former cameraman, Craig Woods, suggests,”A Tonys Award clip show would be better…so many great performances.” Someone else suggested running one of the many already-filmed taped Broadways shows that are available right now. Heck, even having strangers do karaoke of Broadway tunes would be better than the movie version of Grease!!!

Maybe John Travolta and Marilu Henner and other known people who’ve starred in at least a touring company of Grease could just sing songs from the show in a Zoom format!

Come on, CBS—if my peeps and I can brainstorm better ideas for those two hours, why can’t you? Stop being lazy! And unkind. Show us that, as your on-air promos always tell us, CBS Cares. If you don’t overturn this abominable decision, we’ll know that you absolutely do not care.