Trending
You are at:Home»KAREN'S RANTS»KAREN’S RANT/TELEVISION: THE STUPIDEST MISS AMERICA COMPETITION EVER!
By Karen Salkin on December 24, 2019 · KAREN'S RANTS, TELEVISION

THE STUPIDEST MISS AMERICA COMPETITION EVER!

As a lifelong Miss America fan, who can run the category on Jeopardy, I swear this was the absolute worst, most stupid, waste-of-time competition in history! A hunched-over, speed-talking woman, with zero talent whatsoever, won! And I still can not calm down about it. Everything was wrong with last week’s Miss America 2020 competition! I don’t even know where to begin! [Note: Even though I’m spending my precious time writing this, after wasting even more of it watching that nonsense, if you’d rather hear me heatedly talk about the situation, which I highly suggest you do, please watch my latest YouTube video, right here: www.youtube.com/watch?v=-f2Lbms-mF0&feature=youtu.be.]

Okay, for those of you who would rather read my thoughts on the subject, (which are a bit different from the video ones,) here they are, in no particular order: 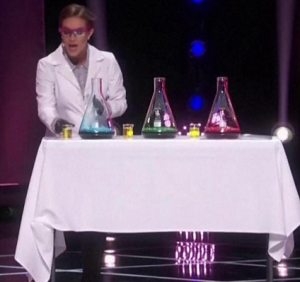 This is the “talent” that won! She poured those small cups of peroxide into the beakers. Shameful!

I have watched the Miss America telecasts ever since I was a little girl. It was one of my favorite events all year. And I lived for the talent portions. As I grew-up, I started embracing the philosophy: the worse, the better.

So they started losing me a bit a few years ago, when they didn’t allow the entire top group to do their performances. And they did it in a cruel way—they made them all put on their performance garb and sit there on stage, waiting to find-out it they’d be called to do it.

I didn’t think the contest could get any worse than that, but this year, the entire shebang slipped to new depths. In every phase of the competition. Every…single…one.

I hated this show so much. It was not even a pageant!!! They were trying to re-invent the beauty pageant by labeling it “Miss America 2.0.” It was downright stupidity. The people who watch this nonsense to begin with, outside of the families and organizations involved, are people like me, who want to see it the way we’re used to. The producers missed the mark in every category this time!

People who don’t want women to be judged on looks should watch a different show. Period. The powers-that-be were trying to make this one not about appearance at all by including so many unattractive females. But then why did all the contestants do their hair, make-up, and wardrobe anyway??? It was so idiotic. Let’s be honest here–Amy Farrah Fowler couldn’t win, while dumb ol’ Penny definitely could! (Those are The Big Bang Theory references, for those of you not in the know.)

Despite those efforts, most of them were all dressed so badly for the stupid make-believe “job interviews” portion of the competition. (Actually, that’s what they called the whole thing this year—not a “contest,” nor a “competition,” nor even a “pageant.” They labeled it all a “job interview!!!” For the job of being Miss America. Can you throw-up?!) 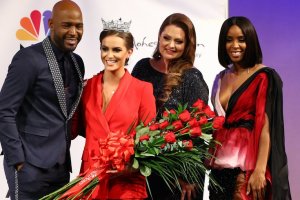 The winner with the paltry three judges who awarded her the title.

And how did they have only three judges chose the new Miss America? It’s called “Miss America,” where well over three hundred million people live—how do just three people, make that decision??? And none of them are even qualified to judge it!!! One is some obscure Canadian actress with few credits. And—believe me, I know how politically incorrect this is to say, but it’s relevant here—she’s very chubby and has bad skin!!!  How can she judge even partial appearance when she allows herself to look like that?! (I know they’re trying to make it not be a “beauty” pageant anymore, and even though more than half of them were far from “ten”s, just by the way they were trying to look, it shows that looks do count. Of course they do!)

The whole show was creepier without the bathing suit completion that it is with it! And why couldn’t the have the evening gown competition??? They’ll have to bring the latter back next year when, in an effort to be politically correct by including everyone who makes a fuss abut entering, the contestants will all be drag queens!

The main girls never got to participate again, after the beginning where they just sat still to introduce themselves. They usually get to at least be on stage, dancing and strutting, in every phase of the competition. It makes them be a part of it, after working so hard to get there!

And that small stage made it look like not even a state pageant—it all had the feel of a regional one! Even a county fair has a better stage!

And it was so cruel how they cut the Top Seven down to five, by telling someone that “you did great in the interview, but sorry, you didn’t make it any further” in front of everyone. So horrible. And when they got the first fifteen, they didn’t even let them strut their stuff or anything! The next thing we knew, they’re cutting them down to seven. 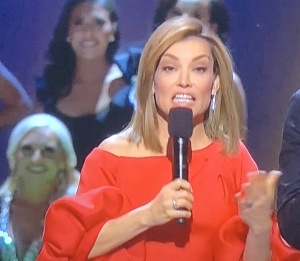 And whoever the stupid woman Kit is, how did she get to host a show like this? She was worse than dreadful. When she announced each girl’s talent, she said something so idiotic it boggles the mind. She said that one of them was about to “perform a classical performance.” OMG. And she said another one was going to now “sing a song.” Hey, as Johnny Carson once said to me about my review of a restaurant, don’t get too technical for me!

And how did they producers think it’s alright for the judges to give critiques to each woman after her performance? That was sooo rude! They were trying to make it be like TV talent competitions, (like AGT and American Idol,) by having just three judges who critique after each contestant had “performed,” but this is such a different show. They did away with all the fun traditions, like the bathing suit and evening gown competitions, but added much cruelty to the mix!!!

But this was the least talented group ever! The only one who “danced,” (and I use that term very loosely—you really need to see me describe it in my YouTube video on the subject,) did the absolute, hands-down worst dancing I have ever seen in my life. And it was from the girl I wanted to win!  And then the male judge points-out that she just “started dancing recently.”  Yeah, of course she did!!! Her state handlers just put this together for her for this competition because she had no other talent and they figured this would be the easiest one to give her. I guess they forgot about packing a suitcase. When someone who does a science experiment is better than a dancer to me, you know her dancing was dreadful.

And the baton twirler twirled in the dark! They didn’t even give her any light. Which is probably better because she really looked pretty bad.  They turned the lights on when she was done! Maybe she should take that as a hint.

The last one’s talent was pouring peroxide from beakers to make a colorful mass! That was her talent?! I did better experiments with my students when I taught elementary school! I could be the next Miss America if that’s a talent. Actually, this is what I’ve always said I would do as my talent for Miss America: I’d ask to go last because my talent is making fun of everybody who went before me. That’s actually better than what I saw on this year’s show! (Again, watch my new video.) 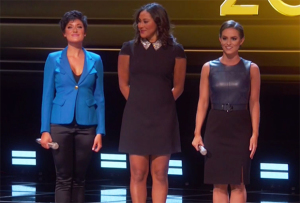 The Final 3. Can you see how hunched-over the winner on the right is?

These final three were–how shall I put it?–the least sparkling finalists ever.

The one who was talking about drug education was making me want to take drugs! (And she won!!!)

Wait—they needed Ernst and Young to tabulate the results of the three judges for two women??? Are they kidding us??? The three judges could just say that one or that one. Oh my God—I could have tabulated it.

This is pitiful that a little hunched-over annoying person who’s on speed is the new Miss America. Horrible result. (It should have been Miss Hawaii from the get-to, or Miss New York, but neither even made it out of the Top Fifteen!!!)

And they had one of the judges announce the winner instead of the host. How creepy. (I think they just didn’t want a man to do it.)

And they didn’t let last year’s winner do her final walk! Nor the new one do her first walk!

And they didn’t announce who won the overall talent competition from the whole week, nor give-out Miss Congeniality!

I think Miss America is going to lose me after this travesty, and when they do, there will be nobody left to watch next year’s version—the 3.0—which will be robots competing!!!

I think this pretty much covers it, but just in case my writing didn’t show just how upset I am over this, and you haven’t yet seen my video on the topic, just click here: www.youtube.com/watch?v=-f2Lbms-mF0&feature=youtu.be.