It’s been four days since Dancing With The Stars announced which four duos would be in this season’s final, and I still can’t calm down from those horrendous results! I’ve been seething since that night. As have most viewers of this dance competition show. (I’ll explain it all as I go along here—I have to just get it all out in a stream-of-consciousness now.) 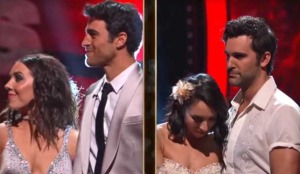 The two couples who got eliminated in the semi-final–Joe, the worst one on the left, and the best one, Juan Pablo, on the right.

I know they have to allow the viewers to vote to keep them engaged and watching, but it’s just not working this season. It’s turned into a popularity contest, and has nothing to do with exactly who is performing the best.

Part of all this nonsense has to do with ABC taking away their results show a few seasons ago. So, after having just performed, most of them admirably, one of the couples gets eliminated that same night. That’s depressing and disgraceful. ABC could not afford them one little half hour the following night? I know there would be the added expense of having all the workers come in again, but they can maybe recoup those losses in ad revenue. Either way, the performers, and more importantly, the audience, deserves that respect. 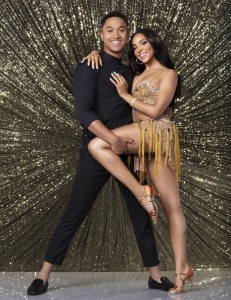 Tinashe and Brandon Armstrong, who should have been the winners!!!

The way they have it now, we don’t know which judges’ votes go with which night’s audience votes. It’s all very murky.

Perhaps they should start doing it the way World of Dance does, and have the judges be the only ones who vote. After all, they usually know best, don’t they? (Not always on that show, but most often.) WOD is an extremely successful series, so people will still watch even if they don’t have to vote. Maybe even more, since we don’t have to jump up and “work” for complete strangers!

Or maybe even use their own Dancing With The Stars: Juniors show as the model. On each episode, they the judges’ scores are combined with those of the studio audience to come up with the result. And only strangers in the audience can cast their vote, (and only one per customer, by the way,) and not any of the dancers’ guests! That makes it so much more fair. 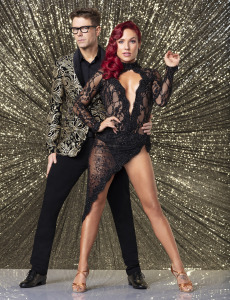 And that way, total lummoxes, such as some regular person they refer to as “Grocery Store Joe,” (who I believe was the first one eliminated on a season of The Bachelorette, and should not have been on DWTS to begin with!,) and idiotic Bobby Bones, a country music DJ, (who has more Twitter followers, because of his vocation, than just about any other competitor this season,) can’t be saved each week because of popularity among one goony group or another!

Because I’m such a dance aficionado, I’ve watched every single moment of all twenty-seven seasons of this show, and I’ve never seen so many voting travesties as I have this season. Often, there are one or two disappointments, (like when Cheetah Girl Sabrina Bryan, who was clearly the best one that season, got ousted in Week Six,) but usually, the correct person wins. Or is at least the runner-up.

But this year, three of the four who should have definitely made the final were eliminated before it!!! Singer Tinashe, who should have won the whole thing, was voted off in only the fourth week! Then footballer DeMarcus Ware, who deserved to finish third or fourth, got eliminated in the quarter-final. 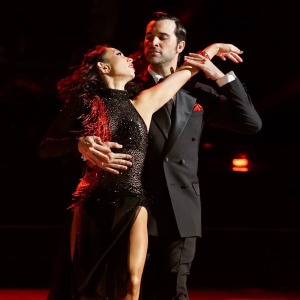 Juan Pablo Di Pace and Cheryl Burke doing the best tango ever seen on this show!

But the cruelest cut of all was Juan Pablo Di Pace. I’m still not sure what his credentials are to be a “star” on this show, but this season was comprised of all strangers and has-beens. There were no “stars” to dance with! But no matter—that guy has danced circles around the competition! In his two dances this past Monday, (the night he got eliminated,) he looked like he was one of the pros! His tango was the most professional dance I’ve ever seen on this show! (Mr. X pointed-out that past winner Meryl Davis’ tango with Maks Chmerikovskiy was equal to it, but Juan Pablo is the male, which is the much harder role of the two, because the man has to lead, and his leading of his partner Cheryl Burke was masterful! So it counts a bit more, in my mind.)

The judges in shock that Juan Pablo did not win, let alone make it to the final.

Even the judges were outraged by that result! The entire room, (save for the people who got to be in the Final because of Juan Pablo’s ouster,) looked stricken. Carrie Anne Inaba kept repeating, “Wrong,” while Head Judge Len Goodman stated, “I know the Americans, we like fair play, but mostly we like justice, and there’s no justice here.” Amen to that. Well said. 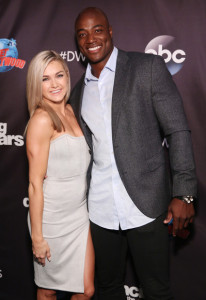 DeMarcus Ware and Lindsay Arnold, who should have come in third, for his smile alone!

On top of all that, now we can’t even vote on the contestants’ often title-clinching final freestyle dances!!! That’s because the winner will be announced…on that same show! They’re ruining this season for everybody, in every which, what, way imaginable! [That’s an expression my first talent manager always said, and I’ve never gotten to use it until right now.]

But, wait—the east coast can vote live that night! I guess the other three-quarters of this country don’t matter. (Where have I heard that before in the past couple of years?)

To sum up how upset I am about all of this, in the immortal words of that original most famous Latin celeb entertainer, ABC (and this show’s production team,) has a lot of ’splainin’ to do! 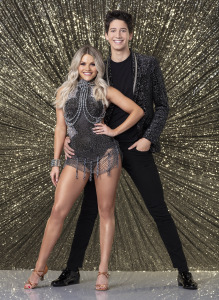 Witney Carson and Milo Manheim, who I now hope will win this season!

But now, I’m just praying that adorable teen-ager, Milo Manheim, and his equally-adorable partner, Witney Carson, will be the victors. But it’s out of our hands at this point. I just hope that the judges do the right thing, and give Bobby Bones the 2s (out of 10,) that he deserves for his awful “dancing.” But I still think his followers will help him grab the mirrorball trophy this season, which will make Mr. X and me puke. At least I’ll be happy for his lovely partner, Sharna Burgess, who’s always been the bridesmaid and never the bride. So, there’s that to cheer me up. I’m just hoping it does not come to that.

But even with all that unfairness, the voting this season is not the worst part of Dancing With The Stars—that dubious honor still belongs to the uber-creepy, full-of-herself, horrible-voiced-and-speeched, obnoxious co-host Erin Andrews. I don’t know even one person who’s a fan or hers, and I do know several people who had to stop watching the show because of her presence on there. ABC might like to explain that one, as well, while they’re at it!

Whew—it’s good to get all of that off my chest. Now let’s all hope that the show and network listen to me, and get it together before next season.