Is there anyone more repulsive on American television than Dr. Phil? I think not. How is it fair that he’s a success and so many deserving people aren’t? What has Oprah wrought? This guy is the creepiest!

How nauseating is this person?! And he looks crazy, too.

I had never watched his show because he really does make me physically nauseous. I actually don’t watch any daytime TV at all! But, one day in early February, as I was setting my DVR for that night, a sensationalistic promo for the Dr. Phil show caught my prurient attention. I’m ashamed of myself, but it did. So, for about a week, I forced myself to try to ignore the host and watch to see these sad stories they were featuring, that were almost akin to something on the Jerry Springer or Maury Povich shows. (I’ve never watched a whole one of those, either, but I’ve seen clips over the years. Are they even still on? I think, and hope, not.)

But at least those two vile shows don’t take themselves seriously. They know they’re junk, and even play that up! And then there’s self-righteous, horrible-looking, hillbilly-accented Dr. Phil, who’s always singing his own praises. (I guess he feels that someone has to do it, right?)

After a few days of watching, I couldn’t waste my time anymore, so the stories of stalking neighbors, possible murderers awaiting trial, and family feuds would have to be left to others with more time on their hands. And lesser IQs. 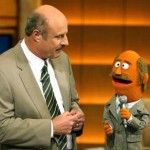 The one on the right is so much more attractive than the other. And much more genuine, too!

But then, while I was lying on the couch, struggling to breathe from my recent bout of pneumonia, I put the TV on during the day to distract me. It was on that channel as the show was coming on, and in my medical-induced stupor, I got sucked-in. And then outraged. The bad doctor was downright abusing some foreign young woman for being engaged to, and having a baby with, a guy who’s thirteen years younger than she, but she was holding her own. He was so far from fair it was ridiculous!

Mr. X was stuck in the room with me, so he had to listen, (even though he refused to watch such crap,) and what Dr. Phil was doing to this poor girl was pitiful. Mr X was disgusted by it, and said, “He takes advantage of naive, low-brow people. It’s a sin…that’s what you go to hell for.” (By the way–he wasn’t saying that in a religious sense; he was just so outraged by what he hearing that he needed strong words like that to express it.)

The last straw for me, and the reason I’m writing this to begin with, came near the end of the show. The girl is thirty, and her beau is seventeen. I realize that’s he’s a minor, so her having sex with him is considered a crime, (even though sometimes a seventeen-year-old is more mature than a thirty-year-old,) but I feel that that you have to take each case on its own merit. Just look at Mary Kay Letourneau and Vili Fualaau! Look at what those two had to go through to be together, and they still are. Sometimes it’s just meant to be. (By the way, I’m not condoning it in general; I’m just being fair and saying each instance is unique.)

But, even though I stick-up for Mary Kay and Vili, that one was quite a different case—he was just twelve, I believe, and she was his much older, married with children, teacher. It was weird. But, obviously, they had a stronger love than most of us can imagine. I think it’s one of those “you had to be there” type of things.

[Oh, digression! When I was a college student in Rhode Island, my boyfriend’s best friend, who was a teacher, (and a major nerd!,) married his shy girlfriend, who was sort-of messed-up emotionally. She even had to get counseled by a nun to be able to try to have sex! But that’s a digression within this digression! There were lots of whispered phone calls between my bf at the time and this guy, and finally, that couple got an annulment. The reason for it all was—get ready for it—because he was dating his twelve-year-old student!!! This guy was absolutely not from whom you’d expect something like that! Trust me. I can’t express that enough.

I finally met the girl when she was seventeen, and, I’m not joking, I thought she was at least thirty-five! I had never seen anyone that mature before! (When some of my friends met her, they figured that the secret had been that this guy was dating a much older woman because she seemed, and looked, like that!)

Anyway, to make a super-long story a little shorter, they got married and had two kids. She and I became pals over the years, and one night, when she about twenty, I asked her to tell me the whole story, which, shockingly, she was happy to. It turns out that she went after him! She said she knew she was in love with him the second she saw him, (which makes me question her mind to begin with,) and set out to get him. At twelve!!! She was from a very wealthy upper crust New England family who had always treated her as an adult, even as a little kid, so she was just always mature.

It’s hard for me to fathom such behavior because I’ve always been immature, but there are people like that. I knew another twelve-year-old like that, too, in New York, but that’s a digression for another time.]

So, back to the story that was going on over at Dr. Phil. The couple that day were much different from the ones I mentioned above. They met on-line when the guy saw her picture, and he lied and said he was older. On the show, they really did look the same age. And he’s about to turn eighteen. Having a baby was his idea, they live together as a family, and they’re planning to get married pronto. But, of course, the girl is facing many years in prison because he was underage when they began having sex.

English is clearly not her first language, and she doesn’t appear to be a mental giant, but she expressed herself exceptionally well. Both Mr. X and I were pleasantly surprised by what she had to say. But Dr. Phil just berated her the entire time. He was brutal. The couple said they came on there to hear his assessment of the situation, and to get his advice. This poor girl is facing fifteen years in jail, which I feel is so unfair.

Near the end of the show, with Phil pontificating, without giving her a chance to speak further, she uttered a sentence to stick-up for herself. And at that, this evil grown-up man had the audacity to nastily tell this poor girl, who can’t afford a lawyer and has a baby at home, that he knows how she can stay out of jail, but now he wouldn’t tell her because she had just talked! I’m not exaggerating! How immature is that??? He stopped short of adding the schoolyard sing-song, “Nah nah nana nah.” And this is a person who’s telling others how to behave?! I was seriously appalled!

Why would anyone go on that awful show? They know he’s a pompous ass who’s always against everyone! He’s just on there to promote himself, and there’s not even a thought in his mind of helping anyone. This is a true shonda. (I usually use that word jokingly, but if ever there was a real one, this is it!) 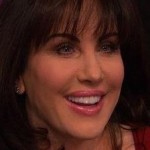 How stupid does she think people are to believe she hasn't had anything done to her face! It's all plastic!!!

And what’s with having to walk-off with his goony wife at the end of every show??? Is it so the producers have to pay her, too? It’s nauseating. She just sits in the audience with her creepy plastic surgery visage, making stupid faces and nodding in agreement to whatever he says. She occasionally rolls her eyes at what someone else says. No one wants to see any of that!

And how many plastic surgeries has she had? Maybe the pair of them need to be on an addiction show to discuss why she keeps doing that. Her face looks like a mask! (But she claims she hasn’t had any work done! If you research images of her, as I just wasted an hour doing, you can clearly see that she’s had a nose job, her eyes done, Botox or the like, and fake teeth. There’s another topic for his show—people who lie about their plastic surgery!!!)

Last little thing, but it’s important because he puts himself out there like he’s smarter than everyone else. On that particular episode, he used the word “grandiose” when he meant “gracious!” That’s a major mistake. They’re two completely different words, with totally different, unrelated meanings. But he should know about grandiosity because it’s grandiose of him to think that he’s using these big words correctly! Maybe he should do an episode about that!