Trending
You are at:Home»KAREN'S RANTS»KAREN’S RANTS/SPECIAL DAYS: THE MOST IMPORTANT PRESIDENTIAL ELECTION IN HISTORY IS FINALLY UPON US! SO PLEASE VOTE, BUT ONLY FOR BIDEN!
By Karen Salkin on November 1, 2020 · KAREN'S RANTS, SPECIAL DAYS

THE MOST IMPORTANT PRESIDENTIAL ELECTION IN HISTORY IS FINALLY UPON US! SO PLEASE VOTE, BUT ONLY FOR BIDEN!

Unlike the generic “vote” that everyone else keeps imploring others to do, I can’t leave it at that. I say to vote only if it’s for Joe Biden! I’m with the always-truth-speaking Charles Barkley when I say to Orange Hitler supporters: Don’t be a damn fool this time! 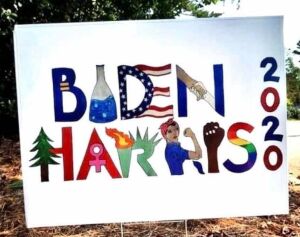 If you are a damn fool, I tell you to should vote on Wednesday, November 4th. (His supporters are just dumb enough to believe that!)

Speaking of that Hitler-wannabe, let me break him down for you, in case you still need the enlightenment—he is racist, sexist, homophobic, elitist, traitorous, and just all-around demonic and deranged. Not to mention insane, incompetent, vindictive, mentally unstable, egomaniacal, and downright stupid. And a pathological liar, to boot. And oh so insecure, (because of either his tiny hands or even smaller brain. Or both.)

Is a devil like that who anyone, outside of people who are all those things themselves, wants leading us? I should hope not. Even his own former White House Chief of Staff, John Kelly, has said, “The depth of his dishonesty is just astounding to me. The dishonesty, the transactional nature of every relationship, though, is more pathetic than anything else. He is the most flawed person I have ever seen in my life.” Wow. Just wow. 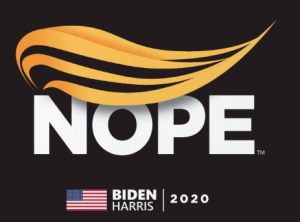 Yet another creative anti-Trump sign. (This one must especially chap his hide.)

This next part sounds like a joke, but it’s actually what Orange Hitler said about the virus, in a row, without skipping even a beat in-between, during the last debate: “I take full responsibility. It’s not my fault that it came here.” How can anyone possibly support this moron??? I just cannot understand how anyone with an IQ over forty is that stupid. Seriously. And, by the way, both Joe Biden and the easy-on-Hitler debate moderator should have called him out for that idiocy.

But all that being said, I never count my chickens. People are already celebrating the change of administration, but I say not so fast. Please keep in mind what happened last election. To use that lunatic’s favorite word, it was a disaster!

And with so much ballot-tampering from the Republicans and foreign powers, I’m biting my nails until it’s over. (And you know how serious I am about my nails!) 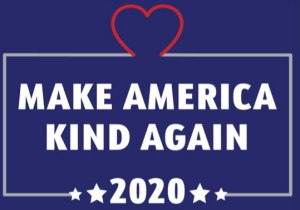 This one doesn’t even have to say BIDEN on it–it’s implied, since he’s the only kind candidate.

So America needs every single eligible person to vote for Joe Biden for President right now! He may not be as wonderful as Barack Obama, but he is still an intelligent, compassionate man who will do his best to bring our country back from the abyss we’ve been led into over the past four years. And, honestly, a potato would be a better leader than that Trump moron!!!

It’s a good thing we’ve all had so much practice in staying at home. If, God forbid, bite my tongue, pooh pooh pooh, Orange Hitler wins, we can never leave our houses again! There will be trigger-happy lunatics at every turn around the entire country. 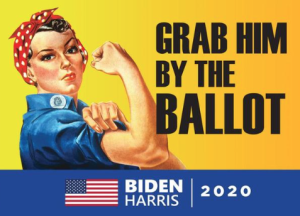 Any woman who votes for Trump should be ashamed of herself for the rest of her life.

Even now, stores are boarding-up everywhere, expecting riots on and around Election Day. Mr. X and I drove through a few Los Angeles neighborhoods this week-end, and noticed those board going up everywhere. What has this country come to? My heart just breaks for it.

I’ve never in my whole life been political before. My parents were Democrats, so theirs are the views I believed in as I grew-up. And then, when I was aware enough to examine the world for myself, I totally concurred with them. I’ve always felt safer with Dems in charge, and over the years, I’ve noticed that many Republican officials are not very bright. And I’ve always wanted our leaders to be smarter than I am! So, to have a complete moron in charge has had me depressed for four years now. And this whole debacle has now forced me to be political, for self-and-world-preservation. 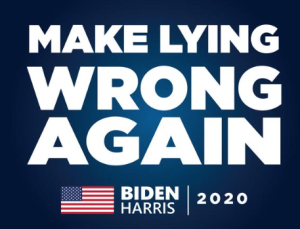 This one spells it right out there–get rid of the pathelogical liar running for re-election!

I can’t stand this tension of waiting for the election results. I think I’m going to get into bed very early Tuesday evening, pull the covers over my head, and tell Mr. X to wake me when it’s all over, and we have a decision. And also have my bags packed and passport ready, just in case, God forbid, it goes Orange Hitler’s way. That will mean there are more stupid and evil people in this country than there are intelligent and fair ones, and that is not a country I want to be living in.

So, please everyone, vote tomorrow, (if you haven’t already,) but only for Joe Biden!

[Note: I’m taking the rest of the week off, either to celebrate or to hide from life, God forbid. If you’re curious about my thoughts on the election results, please follow me on Twitter—@MajorCelebrity—because, as of now, that’s the only place I’m planning to be communicating for the rest of the week.]