[Note: I’ve been writing this since Jada Pinkett first made her announcement that she’s boycotting the Oscars this year. But I keep sitting on it because I don’t want to offend anyone, on either side. But, with this blowing-up into such a big issue, I decided to finally publish it, for better or worse. Please read the entirety to know exactly what I’m saying.]

I’ve been upset about this Oscars situation all week now, but not in the way you probably think. I told myself to not weigh-in on it publicly, but then the other night I woke up at 4AM, writing this in my sleep. So, for better or worse, here goes:

Here’s some breaking news: I’m not going to the Oscars, either. Not because I’m boycotting, but because I like to stay home and watch them. And you know what? People care about me not going as much as they care about the Smiths not going! Which means nobody cares who misses them. So, please blowhards, stop announcing it like you’re hurting anybody. I’ll actually enjoy the arrival interviews much more knowing that I won’t have to listen to that self-righteous duo. And I won’t have to hear that woman repeatedly use the phrase “at the end of the day!” That’s a major bonus. 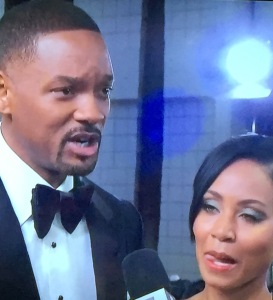 So let’s discuss the topic at hand. In case you didn’t already know this about me, let me state it here because it’s important to my stand on this new issue: I am all for equality. And I’ve never been prejudiced against any peoples. (Well, except maybe Hare Krishna and Disney kid actors. And people who aren’t good to their mothers!) But this Oscars situation has gotten out of hand. It’s actually just a few people of color who are saying these things, not a whole race, so please blame only those who are speaking-out, without even understanding how it all works.

Before I say what’s on my mind, perhaps I should state this, just so you know where I’m coming from: I don’t feel the need to give my civil-rights-equality resume, but trust me when I tell you that I had rarely seen people’s races my whole life, except in a good way. I actually felt that I was part black myself, because of my attachment to Edna, the wonderful woman who brought me up (along with my parents, of course. But that’s all a story for another time.) I’m not quite Rachel Dolezal, but no other Caucasian has grown up being more on the side of African-Americans, or African-Anythings, than I. I’ve taken lots of heat over that throughout my life, including losing many so-called friends. But more than anything, I’m on the side of fairness…to everyone!

I’ve actually had fights with my own Jewish people on behalf of black people. I’ll always stick up for what’s right. When I was a dance club promoter not that long ago, I kept getting reprimanded, and even fired, because my guest list was mainly black guys, but I refused to change it.

[Note: As a matter of fact, my two favorite famous people that I’ve met in my entire life are Muhammad Ali and Sidney Poitier. Not really a hard choice, and I actually forget that they’re black, because I don’t think of their race when I’m admiring them! That’s why I’m adding this a day after I first published it. I just had that realization.]

So, I am not against black people on this Oscars issue, in the least. I’m just trying to open eyes to the fact that the voting system is not against them, either. Or against anyone, as a body. I may not be happy with certain nominations, but those have nothing to do with anything other than that I was not enamored of their performances. Period.

No one was snubbing black actors and artists. The group of AMPAS members does not get together and discuss whom to nominate. Each one sees the films on his or her own, and votes on a secret ballot, just like most other awards groups do. They’re voting on what appeals to them, and what each one feels is universally deserving, and then it’s all tallied. And that’s it. No one is snubbing any group of peoples. Perhaps a few are racially (or in some other way) biased, but not as a body.

Jada Pinkett Smith is just upset that her husband Will Smith, didn’t get a nod this year for his starring role in Concussion. But neither did he get one from the very diverse SAG Awards committee. (When I saw that film, I thought he was very good, but not better than the males who wound-up getting nominated. But I actually did think he would bump one of the others just because they wanted to keep the nominations ethnically-diverse! That’s just nuts that even I thought that way! So, I’m proud of all the nominators for voting for performance over fear of a racial backlash.)

I haven’t finished seeing all the eligible movies yet, so I really don’t know exactly who deserves what. The only movie of color that’s a possibility to being with is Straight Outta Compton, and the only actor or actress who could have been in the running, as I understand it, is Idris Elba in Beasts of No Nation. But what else is there?!

Which brings me to this main point to these malcontents (no matter how long I took to get here): You can’t just complain in general. You have to cite specifics, as in who should replace whom for which award!

Yes, there could have been two more films in the Best Picture category, but obviously the voters didn’t feel that Straight Outta Compton or any of the other hundreds movies made this year, cut it for that award. They may be wrong in some viewers minds, but them’s the breaks. (I liked it better when there were only five nominees in that category, and not the recent bit of up to ten films!)

How are people racists if they prefer a white actor’s specific work over that of a black actor’s? Or a Latino actor’s? Or an Asian actor’s? Should they vote on skin color or performance? Just whom should they take over whom? And why?

And not to mention, what about gay actors? For all their advancements in all other areas of life recently, I haven’t noticed a lot gays getting Oscars nods. Of course, they haven’t had many roles, but isn’t that the same boat that all the other ethnicities are in? You can’t get nominated if you haven’t had a juicy role! Duh.

Every year, some deserving actor doesn’t the nod, no matter what his ethnicity. Or sexual orientation. Or age!

The one who really should be upset is Joseph Tremblay, the little kid from Room. He’s so much more deserving than Mark Ruffalo for Spotlight! (And I love Mark, just not in that film.) But perhaps it’s discrimination against young people. So maybe they should boycott. (How adorable would that be?! Tons of little moppets in front of the Dolby Theatre with picket signs?)

And what about all the Indians in The Revenant? Perhaps the AMPAS voters are prejudiced against Native Americans!

And maybe American actors should boycott because too many Brits were nominated this year. And what of female directors? The list can go on and on, and we all know it. 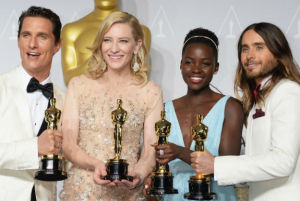 The diverse group of Oscar winners in 2014.

And did everyone forget about all the nominations two years ago, when it was basically the “Blackadamey Awards?” Did white actors threaten to boycott then? That proved that there’s room for everyone…you just need to come with the heat. No one is snubbing anyone.

The Golden Globes, which are given out by the Hollywood Foreign Press Association, often chooses foreigners as their winners.  Many complain about that group’s questionable practices, but people in the biz still want to win a Globe. And we all love going to that awards ceremony because it’s the most fun one. They prove the fact that each organization has its own rules, and can conduct their business as they want. So enough complaining about the Oscars already!

As a side discussion, should the Image Awards or Essence Awards or BET Awards or Soul Train Awards nominate some Caucasians??? No! It’s up to those particular voters from that organization. But when a race of people has many of their own award shows, to the exclusion of other races, (except for the occasional Latino they throw in,) should they complain when one of their own doesn’t get nominated for some other award, that they already do get the nod for when deserving? But keep in mind, for this new crazy “boycott,” it’s just a few people, not the whole race. And those few are not the right people to speak on the behalf of their entire ethnicity.

(BTW–If there was a White People‘s Awards, or perhaps even worse, a Jewish-people-only awards, how much would the rest of the world’s population be up in arms?! Just sayin’.)

And why should Oscars host Chris Rock have to give up his biggest gig ever to kowtow to a few nut jobs?! No one, especially his own people, should be putting him in that position.

My head has been spinning with these and oh so many more thoughts on this topic since this “boycott” nonsense began. I’m sure as soon as I publish this column, I’ll think of a million more. But you get my gist. I hope that it actually helps some people to understand just what is really going on. But if not, at least it should give you some food for thought, to make your own judgements.

And, for the record, here is the AMPAS nomination process, straight from their website: “Regular awards are presented for outstanding individual or collective film achievements in a wide variety of categories. Most categories are nominated by the members of the corresponding branch–actors nominate actors, film editors nominate film editors, etc.” It continues: “All voting members are eligible to select the Best Picture nominees.” So, if not enough non-white actors are given the nod, that means that it’s the other actors themselves who decided that, not the whole “Oscars.”

There are said to be less than six thousand members of the whole Academy, combining all seventeen branches, which, to me, makes it special. You really have to have significant achievements to be invited in.

So, those ragging on the Oscars themselves, saying they have to be overhauled, really don’t know what they’re talking about.

I really hope that the Academy, Chris Rock, and everyone else this might effect, doesn’t bow down to a few malcontents. Life isn’t fair. But this sort-of is. And it’s definitely not worthy of a “boycott.” A boycott begun because the Fresh Prince of Bel-Air didn’t get a nomination!