In the midst of these most disturbing times—with the evil virus, evil cops, evil looters, and the biggest evil of them all–Orange Hitler at the helm–there’s another horrible situation I must address. And that is–when did my first name become a symbol of entitlement??? 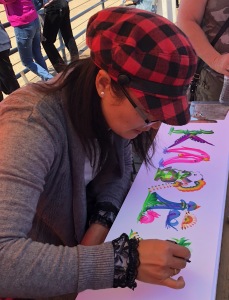 The artist creatively drawing my name. (The full artwork is shown in its entirety in the big pic above. Thanks to my good friend, Marc Winer, for being kind enough to have this done for me!) Both photos by Karen Salkin.

I’ve always loved my name. My whole life. There’s never been a day where I have not wanted to change my middle name, but “Karen” has always done right by me. (Until now, that is.)

When I was doing my former TV show, no one even seemed to know my last name—everyone in town just called me “Karen,” period. Whenever I gave my full name on the phone to someone new, or returned a call to a viewer, they’d seem to not know who I am, and when they recognized my voice, they’d invariably say something to the effect of, “Oh, is this Karen??? What was that other name you said?” I was always so proud of being known as just plain “Karen.” I got such a kick out of that. Even now, whenever someone calls me “Miss Salkin,” I always tell them, “It’s just Karen.”

My name has also led to some welcome nicknames, mainly by my guy friends. Mr. X has always called me “Kah,” even when we’re fighting. (I don’t think he’s ever even used my full name, until now, when he’s been trying to comedically torture me.) And others have used “Kar,” “K,” “KareBear,” and “Kaah-ren.” And this one is my fave: My little friend, Alexa, even recently asked her mother, “Do you think her name is ‘Kare-n” because she cares so much?” Ahh shucks. 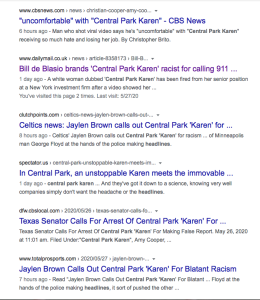 A bunch of stories that are making a mockery of my name.

So what idiot(s) recently decided to make “Karen” a title for bad or obnoxious females??? I don’t get it. I had a slightly bad experience with this new situation a few weeks ago, (where some insecure actor didn’t like my mini-review of his performance, so he came up with, “Of course her name is Karen”–wow, how clever of him,) but I got over it quickly. And then one day soon after, I awoke to this headline about that idiot woman in Central Park who called the police, saying that a black man was threatening her life, when he had just rightfully asked her to put her dog on a leash: “Central Park ‘Karen’ finally apologizes…”

Early on in this debacle, I couldn’t figure-out what insult “Karen” is trying to convey, so I did some research, of course. (Maybe “Karen” should mean “major researcher,” rather than something bad.) It appears to have been started by a disgruntled ex-husband in 2017, who was going through a bad divorce with his wife, Karen, but the name has all of a sudden gained ground. No one seems to know why now, though.

This is the description that was on Wikipedia originally, (but it has been updated and expanded since then, if you’re curious): “‘Karen’ is a colloquial term that is used to typify a person perceived to be entitled or demanding beyond the scope of what is considered appropriate or necessary. One of the most common Karen stereotypes is that of a white middle-aged woman, typically American, who displays aggressive behavior when she is obstructed from getting her way; such women are often depicted as demanding to ‘speak to the manager’ and sometimes have a variation of the bob cut” 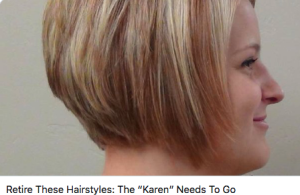 How is this the “Karen?” It looks more like the “Rachel” to me!

They say the usage is: “…common to ‘basic white women’; the most notable is the stereotype that a ‘Karen’ will demand to ‘speak with the manager’ of a hypothetical service provider. Further common stereotypes associated with the ‘Karen’ pejorative include anti-vaccination beliefs, racism against black people, and a bob cut with blonde highlights, engagement in multi-level marketing schemes, and Facebook posts sharing trite motivational messages.” Oysh.

Okay. Not even one of those things describe me! And I’ve had my name for a long time.

I’ve actually never even met a ton of other Karens, but the ones I have, I’ve liked. Most don’t even spell their names in the basic way I do. I’ve come upon Karins, Caryns, Carens, and Karans. I’ve even met a Karon. 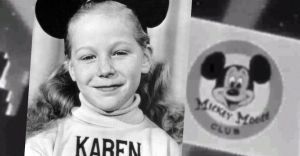 The first Karen I ever knew about besides myself. And she was the cutest Mouskateer, so it made me proud!

I don’t know how those others feel about it, but I’m getting annoyed by the whole thing. I’m actually grateful for the timing of it, though. If it was going to happen anyway, I’m glad it’s while most people are still staying at home. That way, I don’t have to hear about it from anyone, (except Mr. X, who’s having a great time torturing me about it,) and I don’t have to give my name to anyone new.

Actually, the whole lamentable situation reminds me of something out of elementary school. Not just the craziness, but in this way: It’s like the old experiment that elementary school teachers do with their charges, to demonstrate how insidious discrimination of any kind is. They have the kids “shun” blue-eyed kids one day, and brown-eyed the next. The hope is that when the kids see what a horrible feeling it is to be discriminated against, they will never do it to even one other human being their entire lives. Well, I feel like one day during this horrible period in our world’s history, someone said, “Hey, let’s make the name ‘Karen’ stand for someone hateful!”

But it’s been going on waaaay too long! It’s time to switch it to a different name, so that another group of people can feel what it’s like to be railed against for absolutely no good reason. I nominate “Ethel” now. There can’t be many of those, so we’ll be harming as few as possible.