Many years ago, when I was first seeing Mr. X, he and I were visiting a bunch of college pals of his in Santa Fe, New Mexico. The cutest, youngest guy in the bunch invited a few of us over to his house in town for a jam session. (Mr. X plays the guitar and sings.)

Upon arrival, we met his pretty wife, (let’s call her Maria,) and their long-haired, semi-pointed toothed, kind-of wild-looking five-year-old son, (let’s call him Johnny,) who seemed to be sort-of self-entitled with not a whole lot of discipline. I was still young and naïve, and the whole scene was pretty head stuff for me.

We all crammed into the music room, and the guys went to town, jamming. Maria and I sat down right next to each other, with Johnny on her lap, and grooved to the fun live music that our guys were making. All was right with the world.

Until this happened: Johnny turned around in his seat, to face his mother, gave me a really weird, devilish (not in a good way) look, and began sucking his mother’s breast. At five years of age!!! To this day, I have never seen anything so creepy. It still gives me douche-chills.

I tried to remain composed, but my face always gives my thoughts away, (which is just one of the many reasons I don’t even attempt to play poker.) Maria noticed, and explained that, where she comes from, (I believe it was real Mexico,) children breast-feed until they’re ten-years-old!!! That might actually be the exact moment that I decided to never have children. The whole thing was a tad traumatizing. I’m not even making a joke, although Mr. X and I still laugh about the experience occasionally.

So here we are, in 2012, and I couldn’t believe my eyes again last week, in the same category, but from people who should know better, the powers-that-be at the venerable Time Magazine. There on the cover, as I’m assuming everyone in the world knows by now, is a big boy sucking on his mother’s breast!!! (At least, I was praying it was his mother, and not a pair put together by central casting. Can you imagine? I know actors and models will go to great lengths for a job, but this would just be sick!)

I have nothing against breast-feeding, by the way, and think it’s a great thing. For infants!!! It should be over by the time the kinds can crawl. Or at least walk. And definitely by the time they’re three, as the child on the cover is said to be, though he looks closer to six. I just don’t want to look at it that closely to ascertain his true age. 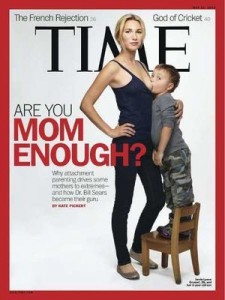 So, here are just a few of my problems with this debacle: the kid’s too old to be breast-feeding. I think it just messes kids up later in life, boys and girls in different ways. Second, if you must do it (and that is really the choice of the parents,) do it in private, for goodness sake!!! And, most of all, don’t splash it on the cover of a national magazine! I’m cringing imagining it again. It just should not be out in the general public like that.

Can you imagine wanting to pick-up your favorite crafting mag from your local newsstand, with your own children in tow, and you have to shield their eyes, in case Time is front and center??? It’s just not right. Nor even okay.

The Time publishers should have thought of all this before they signed-off on it. And, if they did actually ruminate over the consequences of their decision, how did they justify it? There had to be some who voted against it, so let’s hear from them.

When I told Mr. X that I was writing this last week, he assumed it wold be a funny piece. But I really can’t make jokes about this topic. Maybe some other time, but for now, I’m still too outraged. I hope most others are, too, and that somehow, the Time brains get sanctioned, in one way or another.

For me, I just have to try to find a memory-erase pill this very second. I’m sure many of us do.