I guess I have one last year-end rant in me; even though you cannot imagine how grateful I am to be thought of, I am so sick of receiving e-cards from people who didn’t pay for them! Yes, even some of my best friends are guilty of sending them out!

The artists who dream-up these incredible creations aren’t offering them on the internet just to be kind; this is their living. How would you feel if someone came into your place of business and just stole something? Not happy about it, I assure you. 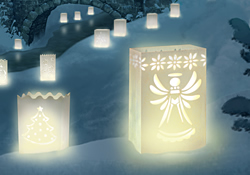 A still from one of the newest gorgeous Jackie Lawson e-cards. Site info is at bottom of this column.

To give some the benefit of the doubt, they may not realize what they’re doing, which is why I’m here to break it down for everybody. Years ago, when I first saw a Jacquie Lawson animated card, it was because someone sent me one for Thanksgiving. It took my breath away…until the end, where the sender’s message goes. I saw that it was signed by “Chris,” which wasn’t even close to my friend’s name. I assumed she had a new beaux, so I asked her who Chris was. She had no idea!!! It seems that someone had forwarded it to her and she, unknowingly, to others!!!

[Note: You had to scroll down through the personal message to see who sent it, which I guess neither she nor her friends knew to do! I’ve had a struggle or two myself in that category; a majority of the people I send them to don’t seem to know how to scroll, either! I sent a JL card as my birthday party invitation a few years ago, (and may again this year for my January 14th b-day, knock on wood,) and just about every recipient asked me for the info! It was all at the end, where you–guess what?–scroll!!! A bunch of high-powered movers-and-shakers, and nary a one of them smart enough to scroll!!! Bodes well for the future of the world, eh?]

I seem to get a lot of those, and I just seethe in silence, torn between being grateful for the card and being upset that I know yet another e-thief. And then, the other day, I was sent one created by a different company, (that looked like a Jacquie Lawson rip-off itself,) that also wasn’t paid for. It wasn’t signed, either, because the person just took the link off that company’s site and sent it out, which means you can’t personalize it.

That was the last straw for me. I had to write this, even though everyone I’ve identified usually reads my columns.

But, come on already. I know that JL charges less than ten dollars a year, for all that beauty!!! Even I, a poor struggling writer and actress, can afford it! (And do, which you’ll notice by the signed cards I often send from their site. My messages are often long, so please learn to scroll!)

So, come on, people, have a heart and sign-up at these companies’ websites. It’s a very small price to pay for such beauty, convenience, and class. And a clear conscience!!!

For more info on how to sign-up for at least the Jacquie Lawson site, go to www.jacquielawson.com.