Trending
You are at:Home»KAREN'S RANTS»KAREN’S RANTS: I’M FED-UP TO THE MAX WITH ORANGE HITLER!!!
By Karen Salkin on October 6, 2020 · KAREN'S RANTS

I’M FED-UP TO THE MAX WITH ORANGE HITLER!!!

I had planned a pleasant, upbeat article for today, about it being the day between yesterday’s National Do Something Nice Day and tomorrow’s International Walk To School Day, but I’m so disturbed by Orange Hitler’s latest lunacy that I finally had to get it off my chest here. I can’t take much more of him! (As I’m sure all normal people are feeling right now!) 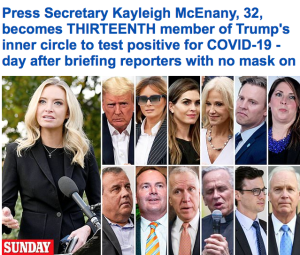 I even had to write this in several sittings because I didn’t want my blood to boil so much in a row. I had to take breaks from even thinking about that waste of plasma.

A Republican pal once told me to not write anything against that slime of humanity because it will “alienate” people. I’m actually friends with all types in life, because they have other things outside of their politics to offer. But, at this point, I don’t care if I alienate anyone who still supports him. I’m so proud of most of my Facebook friends, and real ones, for making public their outrage and disgust at this entire situation.

The fake president was evil garbage before he had covid, and now he’s even worse. No one felt bad for him to have gotten the virus—he 100% brought it on himself! But his utter selfishness brought it upon so many others, as well—he has absolutely no regard for anyone’s life but his own. It’s bad enough that over two hundred thousand Americans have died because he didn’t care—not even enough but at all–to try to stem the pandemic at its start, but then gave out the worst advice of how to treat it, like he had even one clue. 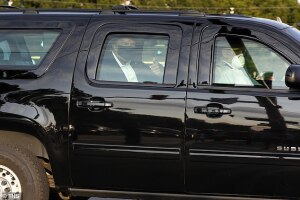 I have no words.

But his recent licentiousness takes the cake. He knew he was infected, yet still went out to one of his pathetic rallies. And on top of that, he decided to endanger the lives of his Secret Service agents by having them drive him around, in a hermetically-sealed SUV, no less, so he could wave out the window, (like anybody cared,) while he was supposed to still be in the hospital!!! That is off-the-charts narcissism!

And then, as soon as he got discharged back to the White House, he ripped-off his mask, like the deranged maniac he is. I have never despised someone as much as I do that deviant dirtbag. (Wait—that could be a case for Perry Mason! The Case of the Deviant Dirtbag! I like it!)

If any of us are being honest, which I am, we’ve been hoping that, at the very least, he gets the most severe case of the virus ever! I want him to finally have even an iota of understanding of what his non-leadership has imposed upon hundreds of thousands of his constituents. That he was released from the hospital so early, and saying he’s over the virus, is a slap in the face to the rest of the world. Even worse is that he tweeted, “Don’t let it dominate your life.” How about the lives of the way-too-many people who have lost loved ones to it, because the deceased and their families didn’t have access to the health care that he’s afforded?! 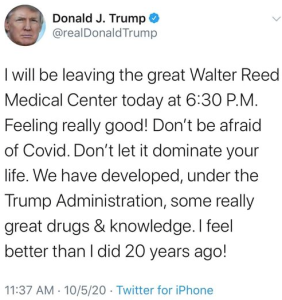 This is the evil that that piece of garbage tweeted when he got out of the hospital. And, by the way, he has invested in those treatments he claims he got.

BUT—I’m still not convinced that he even had the coronavirus to begin with! I’ve thought from the beginning that this is a “Wag The Dog” episode—he needed something major to deflect from his not paying taxes and from how awful his debate was. And to get out of doing another one. And to garner some sympathy going forward to the election.

By the way, in case you’re wondering—no, I did not wish for him to die; I want him to survive and be miserable, rotting in jail for the rest of his life. From my mouth to God’s ears, right? (But yes, I was hoping he’d drink the bleach that he told others to consume!)

So, to calm us all down after my writing this and you guys reading it, let’s end on something positive. (Which means having nothing to do that demonic POS.) So, I hope you all did something nice yesterday for National Do Something Nice Day. I actually did a few things for others, even though “for others” isn’t part of that day’s deal—it just states to “do something nice,” which doesn’t stipulate* for whom, so it could be for yourself! *(Do you think I’m watching too much classic Perry Mason, to use that word?)

And you still have the heads-up for tomorrow’s International Walk To School Day, which in most cases these days means to just walk into the other room!

And remember that no matter how you get there, walking or not, please do something nice for everyone in the world on November 3rd, and vote to get that lunatic out of the White House, before he kills us all!!!

[Note: I highly recommend this article on his latest insanity; this journalist said it all so much better than I ever could. And she was able to accomplish it without all my childish epithets: www.theguardian.com/commentisfree/2020/oct/06/donald-trump-coronavirus-balcony-drugs.]