So, two nights ago on the local NBC news, there was a story about Los Angeles Laker Andrew Bynum parking in not one, but two, handicapped spots.  What an absolutely despicable thing to do!!!  Even if he’s creepy enough to disregard the law, and the laws of human decency, as well, didn’t he realize that, between his giant height and flashy car, that he would be spotted doing it? If for no other reason, his tiny brain should have told him not to park there.

Los Angeles Laker Andrew Bynum illegally using not one, but two, handicapped spots, to unload his groceries! I could make jokes here, but this isn't a laughing matter. Photos from NBC4.

I believe he has bad knees or something, so, if he had a handicapped placard, that would have, of course, been okay. I wouldn’t be able to understand an able-bodied athlete being in possession of one to begin with, unless it was temporary, but then his parking in a handicapped spot wouldn’t be even the slightest issue. However, under no circumstances would it be excusable to take up two spots! Never.

Then, when Joel Grover, the investigative reporter, (which I wish I could be, but I’m not brave enough to confront people who are bigger than I am and clearly have no conscience,) tried to ask Andrew about it at a later time, he just got in a different oversized vehicle of his and shut the door on the guy.

I already hated the full-of-themselves Lakers, so this was nothing new for me to see.

But the next morning, while browsing the web, I was absolutely crushed to read on TMZ that Chris Brown is guilty of the same offense, with pictures to prove it. 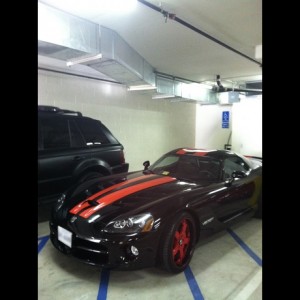 Two vehicles that are believed to belong to Chris Brown parked illegally in handicapped spots. Photo from TMZ.

Now, I still go with Benjamin Franklin’s maxim, “believe none of what you hear and half of what you see,” adding myself, “and not most of what you read,” and I know that TMZ is basically manned by a bunch of gossipmonger nerds, but I have a sinking feeling that this one is true.  The photos they show to support their claims don’t prove that these are indeed Chris’ vehicles, although I believe they probably are.  Anybody can throw anything in photos, but unless we know for sure to whom the items belong, nothing is proven. I don’t want to condemn someone on flimsy evidence, but if these claims are true, I have to hate him, as well.

I’ve long been a fan of Chris Brown’s talent. I even stuck-up for him a little during the mess with Rihanna because we didn’t really know what went on with them. When she came out and admitted she’s into S&M earlier this year, the facts of their situation became even murkier. And, I saw nothing wrong with his throwing a chair in his dressing room when Robin Roberts blind-sided him in his interview on Good Morning America a few months ago. Most of his have a boiling point, and someone being more than rude on national TV was his, which I feel is more than understandable. But now, because of this one inexcusable act, if proven true, I’ve finally joined the haters.

I’ve long been a champion of only handicapped people using their designated parking spaces and just can’t understand what could possibly be in the minds of lowlifes who think that they, citizens who are lucky enough to not be in those circumstances, are entitled to use the spots that are exclusively for people who don’t have the luck of the draw that they do. I just wish that the authorities would do more to punish people like that.

I’ve tried to stop some myself, and if I knew how to make a Citizen’s Arrest, I would. I did once scare a man into moving, though, by saying, “That’s great then. Hopefully, one day, you will be handicapped, so you’ll be able to park there all you want.” And he turned around and moved it!

Another time, in a Brooklyn Staples, I got into it with a giant, tough, masculine woman, and I realized after the incident that she could have knocked my teeth out. I asked the creepy store personnel to make her move, and they wouldn’t, (God forbid they should lose a sale of a couple of dollars to do the right thing,) so I stood over her car, making like I was calling the police. She came out of the store screaming at, and threatening, me and I stood my ground. It was a pretty scary experience.

One time, though, I began yelling at a woman who was trying to park in a handicapped space in a small mini-mall. She just stared at me while she finished parking, with me yelling the whole time. Then she got out and I saw that she was severely handicapped, and I was more than humiliated. At least she should have realized that I was sticking-up for her rights. But that’s when I decided to check-out the whole situation before I react. The city needs to deputize me in this one area. (I’d get drivers on cell phones, too, if I could.)

If Andrew Bynum and Chris Brown are guilty of these offenses, which we already know that Andrew is, something should really be done by the legal system. And them being forced into doing yet more insincere Public Service Announcements by chastised celebrities is definitely not enough.